We use cookies to provide you with a better experience. By continuing to browse the site you are agreeing to our use of cookies in accordance with our Privacy Policy.
×
Stay Connected :
Home » Strong December, but Uncertainties Loom for Defense Industry Programs in 2012
Aerospace and Defense Channel

Strong December, but Uncertainties Loom for Defense Industry Programs in 2012

There was continued activity across all the Defense and Aerospace areas including contracts, business transactions and technology development in the closing month of 2011. On the business front, there were a number of business acquisitions in December with Raytheon acquiring two companies to further extend Raytheon's capabilities to defend against sophisticated cybersecurity threats facing customers in the intelligence community, DoD and commercial organizations. General Dynamics sold its holdings in UAS Dynamics to partner Elbit Systems of America while also completing its acquisition of Force Protection. Back in Europe, a MoU was signed between Cassidian and AleniaAeronautica to jointly investigate the potential cooperation in the field of MALE UAS and UCAV platforms. Safran and Thales signed a preliminary agreement to form a joint venture to develop and market new electro-optical equipment for the defense market, and Thales also acquired US-based Tampa Microwave to complement Thales’s existing product portfolio and expand its capabilities in the wideband SATCOM domain.

Contract activity remained robust with Lockheed Martin involved in the Aegis program and for the continued contractor engineering technical support (CETS) services in support of the Egyptian AN/TPS-59(V)3E and M34 radar sets. Raytheon booked $320 million in new contract awards related to its AESA radar programs for domestic and international customers while the Missile Defense Agency awarded Raytheon a contract to provide two AN/TPY-2 radars to the U.S. Army as the radar component to the THAAD missile defense system. Raytheon also announced contract bookings related to its electronic warfare business and was also prolific in the weapons sector with contracts for the Standard Missile-3 Block IIA as well as multimillion-dollar contracts for the Royal Norwegian Air Force (RNoAF) and contract awards the Phalanx, SeaRAM and Land-based Phalanx weapons systems as well as the NATO SEASPARROW surface missile systems.

In the area of communications and navigation, Northrop Grumman announced a follow-on contract by the U.S. Navy to provide integration and laboratory test support for the LN-251 embedded GPS/fiber-optic inertial navigation system on the new CH-53K Super Stallion helicopter and is also working with ITT Exelis to compete for the U.S. Army's new vehicle-mounted, software-defined radio, the Mid-Tier Networking Vehicular Radio (MNVR), which replaces the cancelled Joint Tactical Radio System (JTRS) Ground Mobile Radio. Meanwhile, Rockwell Collins received an order for more than 20,000 additional Defense Advanced GPS Receiver (DAGR) units for use by the U.S. Armed Services and Allies, while BAE Systems has received a contract to design, install and test onboard radio communications and network capability for the U.S. Navy’s new DDG 113 and DDG 114 destroyers.

Despite the relatively robust performance as 2011 drew to a close, the uncertainties of budget cuts that loom over the industry will lead to pressures across the board with high profile programs such as the F-35 at the forefront of any potential cutbacks. The F-35 is the leading edge strike fighter of the moment, epitomizing the "fifth generation" of platforms and leading the field in terms of pushing the technology envelope in a host of areas through the development of numerous electronic subsystems. However, the program has been beset with problems including rising program costs, production and testing delays, partner nation commitment, the US and global economics and budget constraints.

Strategy Analytics analysis of the F-35 2011 baseline program projections points to a potential global production of 3,340 planes through 2036. Taking just the recent reduction in order quantity by the US DOD for F-35 fast-jets in 2012, and continued uncertainties in budget expenditures suggests continued shrinkage in the F-35 program. Couple escalating platform costs and delayed deliveries with budgetary constraints at partner nations increases the risk for order reduction or order cancellation. This suggests that the base line projections represent the most optimistic—but arguably least realistic outcome for the F-35 program. 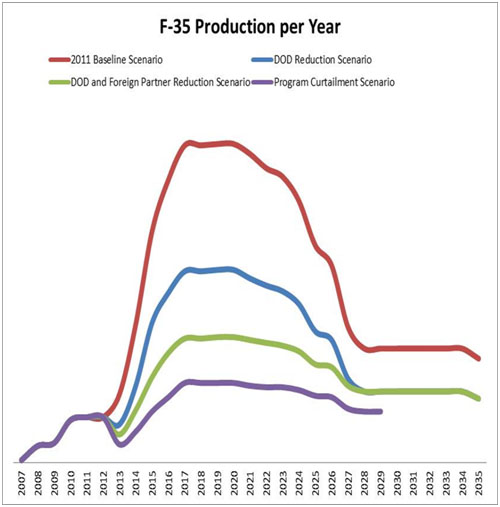 Strategy Analytics has developed a range of alternate scenarios bracketed between the present expressed interest scenario and lower, more limited production case. Early curtailment could be one option with production limited to as few as 877 units but we believe total cancellation of the F-35 program is unlikely. The current environment fits a modeled projection of 2074 units produced through 2036—reducing production over the baseline by 37.5 percent.