We use cookies to provide you with a better experience. By continuing to browse the site you are agreeing to our use of cookies in accordance with our Privacy Policy.
×
Stay Connected :
Home » Underneath the Hood of 802.11ac
Industrial/Scientific/Medical Channel Industry News

David A. Hall, National Instruments, Austin, TX
3 Comments
In a recent market study, researchers estimated that by the year 2015, manufacturers will be shipping more than a billion IEEE 802.11ac radios annually. The figure is impressive, especially because 802.11ac does not yet exist as a public standard. So one may be wondering, "What is this 802.11ac specification and how is it different from today's Wi-Fi?"

A few years ago, some of the world's first 802.11n Wi-Fi products hit the market labeled as "draft-n" compliant. Of course, these routers and access points used the "draft-n" moniker for specific reasons – the standard did not exist yet. Today, 802.11n products are everywhere and it has become widely accepted as the preeminent Wi-Fi standard. However, just like many 802.11g products have largely moved on to 802.11n, the next generation of Wi-Fi will be based on the 802.11ac specification.

The motivation for the new 802.11ac specification is primarily based on the requirement for higher data throughput. In the past few years, Wi-Fi has moved from 802.11a/b to "g" to "n." The 802.11ac very high throughput (VHT) specification promises substantially higher data rates. This article will walk through some of the fundamental enabling features of the physical layer that allow the specification to support higher throughput. More specifically, evolutionary characteristics, such as the implementation of use of wider channel bandwidths, changes in modulation type, the use of more spatial streams and the possible data rates, will be described. 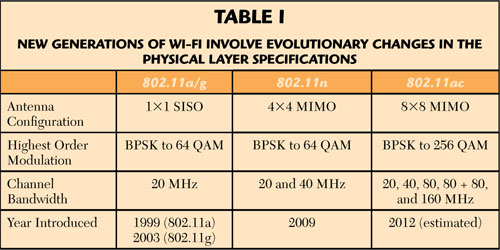 Table 1 compares some basic physical layer specifications of both the past and future generations of Wi-Fi. The primary new feature introduced in 802.11n specification was the use of more spatial streams through the introduction of 4×4 MIMO technology. In the 802.11ac, the maximum spatial streams have moved to eight with 8×8 MIMO. In addition, other notable changes are the optional use of 160 MHz channel bandwidth and the introduction of the 256 QAM modulation scheme.

Use of Wider Channel Bandwidths

Up until the age of MIMO, the Shannon-Hartley theorem was generally regarded as the primary model of theoretical data throughput through a given digital communications channel.

According to the theorem, data rates through a particular channel can only be increased by affecting either channel bandwidth or signal-to-noise ratio (SNR). Today, the Shannon-Hartley theorem does not account for the effect of multiple spatial streams on total data throughput – but it does illustrate the direct correlation between channel bandwidth and data rate.

The optional 160 MHz mode marks a substantial change from the maximum bandwidth supported by 802.11n (40 MHz). Today, the only Wi-Fi band with 160 MHz of available spectrum occurs in the 5 GHz band (and not in the 2.4 GHz band) and thus, the 802.11ac specification applies only to the 5 GHz ISM band.

While the Shannon-Hartley theorem is able to reasonably estimate the maximum theoretical throughput in a Single Input Single Output (SISO) channel, it must be slightly modified to adequately predict the maximum channel throughput in a MIMO channel. In a physical channel with sufficient multipath reflections, the maximum theoretical improvement in data rates scales linearly with the number of theoretical spatial streams. For example, in a 2×2 MIMO system, the use of two independent spatial streams in the same physical channel, (that is at the same frequency), effectively doubles the data rates over what one might expect from a traditional SISO system. Accordingly, a 4×4 MIMO channel would enable 4× data rates improvement and an 8×8 MIMO channel would enable 8× data rates over a SISO channel. As such, a modified version of the Shannon-Hartley theorem can be illustrated. Similar to other emerging wireless specifications, such as 3GPP's LTE Advanced, 802.11ac VHT specification allows for use of up to 8×8 MIMO.

Perhaps one of the most interesting mechanisms offered by 802.11ac to increase data throughput is the use of the 256 QAM modulation scheme. Since the deployment of 802.11a, the 64 QAM modulation type was considered the "highest order" modulation type among all wireless standards. However, 802.11ac marks the first major commercial wireless standard in the consumer world that invokes 256 QAM for increased data throughput. Equation 2 shows the simple relationship between the "order" of a modulation scheme and the number of bits that can be represented by each individual symbol.

It shows how simple modulation schemes, such as Binary Phase Shift Keying (BPSK) which utilizes only two symbols, would produce only one bit per symbol (log2 (2) = 1). By contrast, a more complex modulation scheme, such as 256 QAM, is considered to have a higher "order" and thus produce higher data rates. In fact, 256 QAM yields eight bits per symbol (log2 (256) = 8). By comparing 802.11ac to 802.11n, it can be seen that, in environmental conditions where 256 QAM can be sustained, up to 33 percent higher data rates over the traditional 64 QAM scheme would be enabled. 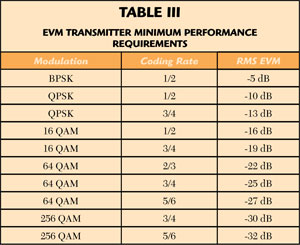 One interesting note on modulation order is that a very tight correlation between the modulation quality of a transmitter and the Shannon-Hartley theorem is shown. One of the easiest ways to observe this relationship is to look at the 802.11ac specification limits for transmitter relative constellation error (equivalent to EVM). As shown in Table 3, higher-order modulation types such as 256 QAM, have more stringent EVM requirements – not surprising given there is very close correlation between EVM and SNR.

Figure 1 Higher SNR enables use of higher modulation types, such as 256 QAM.

In order to best illustrate the effect of SNR on the order of modulation type, Figure 1 illustrates the constellation diagram of a 256 QAM signal in various SNR environments. As shown in the constellation diagram for 256 QAM, an SNR of 32 dB is sufficiently large to demodulate a 256 QAM signal without significant bit errors – and, hence, frame errors. By contrast, in an environment with a lower signal-to-noise ratio, a smearing in the constellation occurs, which is evident at an SNR of 27 dB or less. Under these channel environment conditions, a given Wi-Fi access point would not be able to sustain communications using 256 QAM, but would transition to a lower-order modulation scheme that was capable of sustaining the appropriate frame error rate performance. This example is a practical illustration of the relationship between SNR and data throughput as described in the Shannon-Hartley theorem.

Given the key enhancements in the 802.11ac specifications, such as wider bandwidth, more spatial streams and higher-order modulation types, one would suspect that the optional high throughput features would yield roughly an order of magnitude higher data rates than 802.11n. In fact, with the theoretical limits for 802.11n at approximately 600 Mbps, the data rate increase in 802.11ac should roughly be an order of magnitude higher.

In order to correctly predict the maximum theoretical throughput of 802.11ac, key factors, such as modulation type, number of data subcarriers, code rate, symbol rate and number of spatial streams, must be considered. To determine the aggregate data rate, first determine the number of coded data bits that can be transmitted at any one time. The pre-draft 802.11ac specifications refer to this as the "Number of data bits per subcarrier" (NDPSC) and it includes data bits over all spatial streams. Mathematically, NDPSC is determined by factors such as the bits per symbol, code rate and number of data subcarriers. Mathematically, NDPSC can be represented by

For example, in a 20 MHz 802.11ac transmission, 52 of the 64 subcarriers are used for data and the rest are used for a combination of guard bands, null subcarriers or pilot tones. If one were to use a modulation type of QPSK and a code rate of ½, NDPSC would equal 26 bits (1 × 52 × 0.5). In Table 4, NDPSC is computed for a number of combinations of bandwidth and spatial streams, for scenarios where the 256 QAM modulation type is used.

Given the total data bits per spatial stream, the maximum theoretical throughput of the 802.11ac physical layer can be calculated simply by multiplying NDBPS by the number of spatial streams, the symbol rate and percentage of total symbol period that is utilized for data. In this case, the symbol rate is equivalent to the subcarrier spacing, which is 312.5 kHz or 312,500 symbols/second. This relationship is illustrated in Equation 4.

As Equation 4 demonstrates, the symbol utilization is the ratio of the data symbol period divided by the total symbol interval. Where:

The theoretical maximum data throughput offered by the 802.11ac physical layer is greater than 6.9 gigabits per second. However, it must be noted that this approximation is merely a theoretical calculation. In practical terms, data rates exceeding 6.9 Gbps are only possible when the physical channel is physically diverse enough to allow for eight spatial streams simultaneously. Moreover, given the SNR requirements on the 256 QAM modulation types, it is likely that the maximum theoretical throughput will only be approached in scenarios where the transmitter and receiver are in close proximity – where signal strength will be much higher. Finally, it must be also realized that there is much more to a communication system than just the physical layer. While it is clear that the physical layer should be able to support 6.9 Gbps, substantial enhancements must also be made to the MAC layer, digital data buses and even embedded processors in order for vendors to produce products capable of utilizing the maximum data throughput.

The next generation of wireless standards, such as 802.11ac, produces obvious benefits to consumers in the form of higher data rates. However, design and test of the radios designed to use these standards pose significant test challenges. For example, today's engineers have to deal with the complexity of multi-radio testing configurations such as 8 × 8 MIMO. In addition, the bandwidth requirements of the optional 160 MHz specification are substantial and engineers will be tasked with obtaining good measurement fidelity over increasingly wider bandwidths. Finally, in automated use cases, measurement speed often increases with measurement complexity. Given that, demodulation of 802.11ac signals requires an order of magnitude more of signal processing power. Measurement speed associated with 802.11ac testing will also be a concern. Going forward, it appears that software-defined PXI test equipment will be at the forefront of testing next generation standards. Today, 802.11ac products are already being tested with PXI test equipment and the core benefits of PXI, such as modularity, flexibility and signal processing power, will continue to drive PXI adoption in the test and measurement industry in the near future.