We use cookies to provide you with a better experience. By continuing to browse the site you are agreeing to our use of cookies in accordance with our Privacy Policy.
Home » Blogs » David Vye, MWJ Editor » Underneath the Kimona 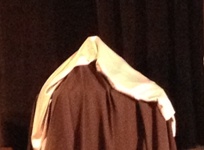 Most successful new companies are based on an innovative idea. Fast growing companies can credit market demand and great timing for their rapid success. Companies that sustain high growth over decades have demonstrated that their original innovation has a quality to address or at least morph to long-term market needs. This is a trait that technology followers most often associate with corporate vision and happens to be a defining characteristic of National Instruments, which held its annual user group last week at the Austin convention center. One can go to NI Week, the company's Worldwide Graphical System Design Conference and Exhibition, and witness firsthand how this company's impressive level of innovation exists side by side with continuity. NI's ability to up the ante year after year is based on their leveraging of Moore's law on the hardware side, coupled with the unbounded capabilities of powerful software put into the hands of a user community eager to exploit its potential. In other words - VISION.

And it is the empowerment of its users that allowed a single company such as NI to draw over 3,400 attendees this year, traveling at their personal or company's expense for three days of workshops, corporate keynotes, partner exhibitions and networking.   This year’s big intrigue started weeks prior to the opening keynote address, delivered as it is every year by co-founder and Chief Executive Visionary, Dr. Trouchard. With a level of secrecy usually reserved for next year’s car models, NI teased the industry with a veiled product and a promise to redefine RF instrumentation as we know it. But before the unveiling, Dr. T and his team walked the keynote audience through the history and philosophy that has defined NI, starting with the application specific language behind the company’s flagship software product, LabView. The key to this product’s capabilities and popularity has been a graphical interface that empowers engineers of all stripes to work with system blocks at any level of abstraction. These higher level abstractions allow engineers to focus on their task at hand with just the right level of detail. The flexibility of LabView as a graphical programming language allows it to be used across virtually any discipline and its building block approach allows LabView to bridge the entire design “V”, from conceptualization through design verification.

NI’s original vision for LabView was to provide a tool for engineers similar to what spreadsheets such as Lotus Notes 1-2-3 did for financial people. Today, the vision is much larger and more comparable to what apps have done for Smart phones.  Before handing off the keynote to Eric Starkloff, VP of Marketing to introduce this year’s crop of major new product releases, Dr. T discussed the revolutionary promise that lies within software to improve performance and yet Moore’s law had not effectively been implemented in test equipment. While “hardware continues to evolve, the revolution is led by software”, by which NI hopes to offer engineers a “step function increase” in productivity. With examples ranging from big physics projects at the CERN supercollider, to green energy, bio-engineering and telecommunications, Dr. T illustrated how LabView is at the heart of a “Graphical System Design” philosophy that extends beyond the “virtual instrument” that first helped this product make an impact with users.

Eric Starkloff continued the week’s recurring theme of re-inventing instrumentation to fit Moore’s law by talking about “software definable instrumentation” which builds off the ease and flexibility of LabView at the heart of the “Graphical System Design” and extends to more power and control over an instruments firmware through FPGAs. Noting that there are 10 million engineers but only about 100,000 HDL designers, NI has identified a game changing opportunity. By allowing LabView to be used to program an FPGA, NI’s instrumentation firmware can be readily modified by end-users with an interface that they understand.  After walking the audience through some examples of how users are programming FPGA’s to graphically design systems, Starkloff introduced members of his development and marketing teams to provide further examples and updates on the new capabilities in LabView 2012, an exciting new stand-alone CompactDAQ, and the latest in PXI streaming technologies.

To talk about the PXI technology, which was the lead-in to unveiling NI’s big secret, Eric called on Charles Schroeder to discuss the company’s state of the art in this compact, automated test platform. Schroeder took the audience through the timeline of innovations since NI introduced the PXI platform 15 years ago, emphasizing the developments in processing, bus technologies, FPGAs, and data converters. Today, the company can calculate 240 times the number of gigaflops per second and transfer 120 times the number of gigabytes per second compared to the original release of PXI back in 1997. This year, NI has implemented the Intel i7 quad core technology to the PXI platform, upping the boundaries of where they can apply PXI based instrumentation. Taking advantage of this new processing power allows NI to introduce the first Giga-sample per second FlexRIO adaptors (3GS/s 8 bit and 1.6 GS/s 12 bit digitizer modules). 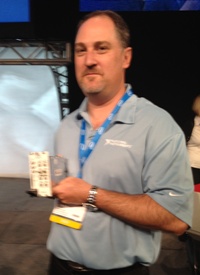 With Moore’s law driving the performance, speed and size of the PXI platform, the NI presentation turned to discuss one of the hardest challenges in automated test, namely wireless communication devices. Schroeder explained the ground-up approach that the NI development team took to re-think the basic architecture of automated test in order to address this very challenging problem.  Applying the company’s core philosophy that places software at the heart of exploiting Moore’s Law, the development team has integrated an RF signal generator, analyzer, digitizing I/O controllers operating under the control of a LabView programmed FPGA all in a PXI module, resulting in an extremely fast, ultra compact automated test solution known as the Vector Signal Transceiver. This first product launch under the “Software Definable Instrument” architecture operates up to 6 GHz and can perform any RF/microwave measurement that is based on a signal generator and analyzer, Pin/Pout, EVM, ACPR, IP3, TOI, etc. The built-in digitizers and FPGA control speed up the instrument control, data acquisition and processing speed in order to allow rapid testing over an extremely large set of test operating conditions, one of the biggest challenges for wireless devices designers who have had to settle for incomplete data sets due to an exhaustive number of possible test conditions.

As a test solution that engineers will be able to directly program through LabView, the number of possible measurement types are virtually limitless. Some of the initial demos and success stories that NI presented included an RF power amplifier output power level servoing application, a 2 x 2 MIMO real-time channel emulator, and Doug Johnson, Director of Engineering at Qualcomm Atheros whose team is using the VST to perform complete gain tables on 802.11 ac radio transceivers that operate over 100 channels, 38 modulations schemes, 4 filter widths and 8 spatial streams (100,000+ test combinations). Obviously more modes need more testing. Previously the designers could only perform 30 to 40 test iterations due to practical time constraints, falling far short of the number needed to understand the optimum settings for the radio transceiver itself.  By combining digital and RF control at the firmware level, rather than back at the controlling PC, the VST demonstrated a 200 times increase in performing EVM measurements versus average output power chain, making the measurement of a full data set of diagnostic performance curves feasible.  The new VST starts at $45k (US). Look for more details on the Vector Signal Transceiver in the August issue of Microwave Journal where it is featured as the MVP.

To support different RF and microwave measurement set-ups for the FPGA, NI has added templates to the LabView 2012 product that provide a great starting point for engineers who need to develop a custom test solution, but wish to leverage common, well-established measurements. The templates and sample projects provide recommended starting points designed to ensure the quality and scalability of a system. All of the templates and sample projects are open-source and include extensive documentation designed to clearly indicate how the code works and the best practices for adding or modifying functionality. In addition to demonstrating recommended architectures, these projects also illustrate best practices for documenting and organizing code.

Embedded systems typically require an architecture that is designed for reliability and deterministic performance. As a result, many embedded applications require processes dedicated to system status monitoring, error handling and watchdog timers.  The LabVIEW sample projects for CompactRIO and PXI RT DAQ illustrate best practices for addressing these needs by providing recommended software architectures that can be used for a variety of embedded control and monitoring systems.  These sample projects also illustrate best practices for data communication, network connectivity, control routines, data logging, and more. One such sample project is designed for applications that require high performance control and/or hardware-based safety logic. Rather than running the control algorithm in software, the control is implemented in the FPGA fabric, enabling your control loops to achieve rates faster than 10 kHz with minimal jitter. The FPGA VI also contains safety logic that immediately puts any outputs into a safe state upon a critical error or real-time software failure for maximum reliability.

Intel Core i7 dual-core processor, 2 GB RAM and 32 GB nonvolatile storage – Run high-performance, mixed-measurement tests while logging data directly to the system, removing the need for an external PC. The 8-slot chassis has more than 50 C Series I/O module options allowing users to mix and match a variety of I/O and sensor types, including: AI, AO, DIO and CAN to create custom measurement and logging systems. Interfaces include: USB, Ethernet and serial ports. Connect USB/Ethernet NI CompactDAQ devices, including the new NI cDAQ-9184 Ethernet chassis, to expand the number of module slots for large-channel-count applications or integrate other devices, such as a camera or GPS device. Stream data to disk at up to 30 MB/s – Simultaneously stream continuous measurements with sample rates up to 1 MS/s/ch.