We use cookies to provide you with a better experience. By continuing to browse the site you are agreeing to our use of cookies in accordance with our Privacy Policy.
Home » Blogs » Pat Hindle, MWJ Editor » How I developed the Sixth (or Twelfth) Wavelength Transformer

How I developed the Sixth (or Twelfth) Wavelength Transformer

Patrick Hindle
No Comments
The following article was sent to us by Peter (B) Bramham, inventor of the sixth wavelength transformer (I never knew that in his first publication he was mistakenly listed as B. Bramaham so it has taken many years for people to realize it).

There have been various references in the last few years to a method of matching transmission lines, variously called the “alternated-line” and “twelfth-wave” and “Bramham’s” transformer. This is shown in the Figure below. It is usually compared with the quarter-wave stepped matching section and the half-wave taper, over which it has several advantages. It is shorter in length, and uses only lines of the same impedances as the lines which are to be matched. 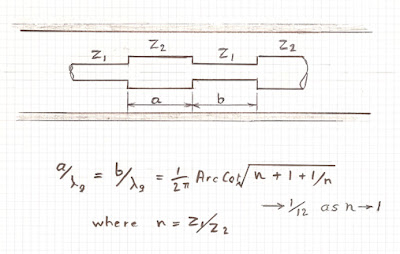 Back in 1959 I was a member of the international group working at CERN, the European Laboratory in , on a proton linear accelerator. I had previously worked in on electron accelerators for medical use, which used high-power RF at S-band (around 3000 MHz). For proton acceleration, lower frequencies were used, in this case 202.5 MHz. So I had to forget about waveguides, and get used to rigid lines and coaxial cable. The high-power feeds to the accelerating cavities used 3-inch line made from brass or copper tubes, and phase-shifters and power-dividers were required in the lines.

At that time, there were various standard impedances for coaxial lines and cables. In , 75 ohm and 50 ohm impedances were largely used. Equipment we had from used 60 ohms, while that from the used 50 ohms. CERN had a mixture of these. The linear accelerator design was based on a machine being built at AERE Harwell in , and used high-power lines of 47.6 ohms. This seemed strange, but turned out to be the nearest you got to 50 ohms using standard (“Yorkshire Copper”) brass tubes. Rather than machine metric tubes to get 47.6 ohms, I changed our standard impedance to 50.4 ohms which corresponded to metric tube sizes.

So I had to fit impedance transformers all over the place. I started with half-wave tapers where there was space, or quarter-wave stepped lines where there was not. Then I started looking analytically at various matching systems. Hence my report CERN 59-37. As it seemed to be of interest in other labs, I offered it for publication to the journal “Electronic Engineering” in January 1961 (reference 1). (Due to a printer’s error, my initial appears as B instead of P). Only in recent years have I seen many references to my work, perhaps because the Internet makes it much easier look in the literature.

The main interest in my transformer seems to have been in the , among radio-amateurs (“hams”). A common problem was matching a 75 ohm feeder cable to a 50 ohm system. With my transformer you didn’t have to look for a quarter-wavelength of 61 ohm cable.

I have been pleased to see many references to my transformer on the Internet, thanks to L.B. Cebik (reference 2), Darrel Emerson (reference 3), and others. I have retired from CERN now (many years ago), and am living in , close to the Swiss border and .