We use cookies to provide you with a better experience. By continuing to browse the site you are agreeing to our use of cookies in accordance with our Privacy Policy.
×
Stay Connected :
Home » Blogs » Pat Hindle, MWJ Editor » Ericsson 2020 Mobility Report Summary

While 5G subscription growth has slowed from the pandemic in some markets, this is outweighed by other markets where it is accelerating, leading Ericsson to raise their forecast of global 5G subscriptions at the end of 2020. Ericsson estimates there will be 190 million 5G connections by the end of 2020 and 2.8 billion by 2025 as shown below. 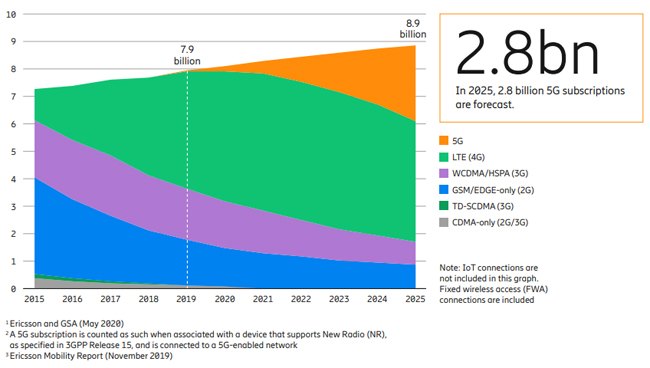 The breakdown of connection types is expected to vary widely between regions as shown below.

One surprising development is they expect 25% of the global mobile network traffic to be from fixed wireless access with 160 million connections by 2025 as shown below.

Due to the pandemic, a substantial increase in the volume and duration of mobile voice calls across networks, ranging from 20 to 70 percent, was observed in the most impacted regions during the initial lockdown phase. However, mobile data traffic growth was typically moderate, or even negative, ranging from -10 to 20 percent in different networks.

The pandemic caused some slowing of the rollouts this year, but the second half of the year is expected to pick up for both NSA and SA 5G deployments. To date, over 100 commercial 5G device models have been released with increasing support for mmWave frequency bands. Fixed wireless terminals (FWT), modules and connected PCs are gaining traction. Retail prices of 5G devices as low as $300–400 is expected in the second half of 2020, reaching mid- to low‑tier segments. From volume to performance optimization, second-generation chipsets started the volume deployment of 5G devices, with vendors launching flagship models in the first quarter of 2020. Third-generation chipsets will reach the interoperability labs this year, enabling performance-optimized 5G devices in 2021. New manufacturing processes will improve power consumption and allow new features that focus on end-user performance in the 5G SA domain.

Taking advantage of mmWave frequency support, spectrum is available in the 24, 28 and 39 GHz mmWave frequency bands. Currently, this spectrum enables devices capable of end-user bitrates of over 4 Gbps. The US has led investments in

mmWave spectrum and technology, and consequently other markets are expected to take advantage of developments in the high-band device ecosystem. There are a growing number of device models supporting mmWave both in smartphone and customer premises equipment (CPE)/FWT form factors for use in markets across North America, South East Asia and South Korea. The first networks using low-band spectrum for 5G are live and the number of compatible devices is increasing. This also includes support for spectrum sharing, starting with a few band combinations fitting the initial launches, and more expected over time.

5G SA is gaining momentum in China, with devices configured to support SA on service provider activation. In Europe, the demand for 5G SA devices for dedicated network applications is growing, driving requirements for form factors beyond smartphones. In the US, the initial target is to introduce SA using low-band for mobile broadband. 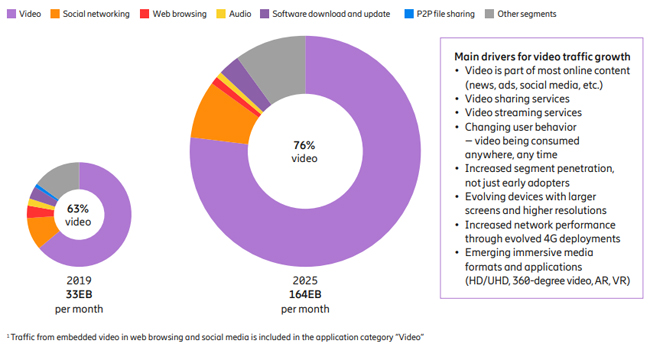 By 2025, 45% of the mobile data traffic is expected to be carried by 5G networks and 5G could cover up to 65 percent of the world’s population by then. The number of Massive IoT connections increased by a factor of 3 during 2019, reaching close to 100 million. At the end of 2025, NB-IoT and Cat-M are projected to account for 52 percent of all cellular IoT connections with the number of connections exceeding 5 billion as shown below. 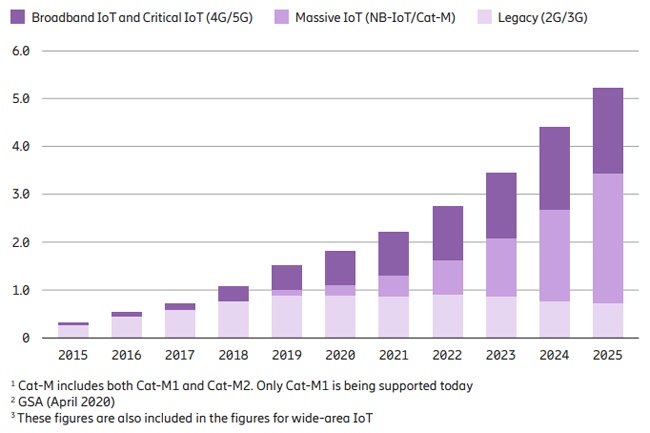