We use cookies to provide you with a better experience. By continuing to browse the site you are agreeing to our use of cookies in accordance with our Privacy Policy.
×
Stay Connected :
Home » Blogs » Pat Hindle, MWJ Editor » Uhnder Emerges with Highly Integrated Automotive Radar SoC 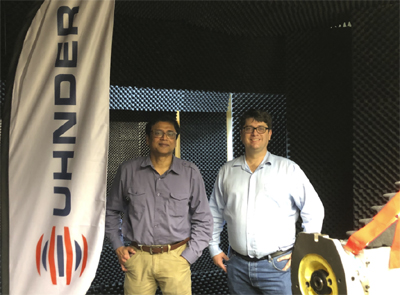 We recently were introduced Uhnder coming out of stealth mode as a semiconductor startup headquartered in Austin, TX supplying the first all digital automotive radar chips. Manju Hegde and Curtis Davis founded the company in 2015 with a goal of developing disruptive technologies for sensing, cognition and communication. With previous experience in startups, Manju and Curtis recruited a talented team from the automotive and radar industries as well as RF CMOS designers, digital signal processing and high-performance software experts.

Uhnder uses a combination of advanced CMOS and digital code modulation (DCM) technology to deliver radars with improved performance, smaller size, lower power and cost. Their radar sensors map the environment in 3D with a range of up to 300 m. The radar on chip (RoC) has 12 transmit antennas and 16 receive to form 192 virtual elements using the 77/79 GHz band. They presented a proto-type at ISSCC 2019 that uses a 15.2-to-16.2GHz LO that is generated by an external PLL: the differential LO input is converted to quadrature by using a polyphase filter. The filter output is buffered and distributed to all TX/RX channels with a differential 100 ohm-terminated transmission line. All channels use limiting amplifiers and Sub-Harmonic Quadrature-Injection-Locked Oscillators to generate the mm-wave carrier at 5× the injected LO frequency. Digital signal processing and other radar signal computational power is supported on the same chip by two CPUs with floating point support and two DSPs. The overall software-defined hardware pipeline is capable of up to 20 Tera-Ops baseband processing. That is quite a lot of analog and digital content packed onto one chip.

The antenna elements are waveguide coupled with low loss to the chip using substrate integrated waveguide. The radar was tested with an external PLL, and the 77.5GHz TX phase-noise at 1MHz offset is -110dBc/Hz. During described in the paper, 8 TXs were operating at the same time in MIMO mode. The authors reported more than 30 dB cancellation which allows concurrently lowering the correlation noise floor by about 20 dB compared to when the self-interference is present.

The sensor can use MIMO or beamforming/beamsteering modes to realize more range and sense in 3D. Uhnder’s approach of using CMOS combined with advanced digital processing techniques borrowed from cellular communications gives them a competitive advantage over existing radar sensor and could even apply to 5G mmWave communications, robotics and surveillance applications.

There are three main differences between the current automotive radars and Uhnder’s DCM technology. Automotive radars today are Frequency Modulated Continuous Wave (FMCW). FMCW modulates a sinusoid waveform in frequency to transmit and then receive it. The radar captures the “echo”. By measuring the frequency difference between the transmitted waveform and the received waveform, typical radar parameters such as range, velocity, and angle of arrival can be inferred.

First, Uhnder uses DCM by using phase to modulate the transmit signal rather than frequency and by coding the phase digitally, very precise measurements can be achieved. In addition, Uhnder uses advanced MIMO transmit and receive technology to not only measure azimuth angles but also elevation. Using DCM rather than FMCW and utilizing fine line CMOS technologies, the solution can achieve unprecedented levels of resolution and accuracy.

Third, Uhnder completely integrates the radar on a single chip: all the RF, the analog frontend, the baseband, the digital front end, the digital back end, and the post radar detections signal processing. This enables the best use of CMOS silicon area for performance/watt, allows for functions to be divided between the analog and digital portions optimally, and allows for high bandwidth interfaces between the various segments of the pipeline whether it is the analog, the digital or the programmable parts of the chip.

Uhnder has more than $75M in investment funding from a variety of sources. Uhnder signed an agreement with Magna in 2015 to be the supplier for their next generation radar sensor called ICON. Multiple global automotive OEMs are currently evaluating Magna/Uhnder’s digital RoC prototype. In addition, several other sensor manufacturers are doing early product evaluations.  Product availability is slated for late 2019/early 2020. We will follow them closely and see how their technology progresses.