We use cookies to provide you with a better experience. By continuing to browse the site you are agreeing to our use of cookies in accordance with our Privacy Policy.
Home » Blogs » Pat Hindle, MWJ Editor » Autonomous Sensors Make the Future of IoT Possible

I attended the annual COMSOL conference recently and it made me appreciate that there are many important physical aspects to simulate other than just RF electromagnetic fields. The environment and thermal effects can be significant, and that needs to be considered in many designs.

There is a large focus on the Internet of Things (IoT) and one aspect that seems to be left out of many discussions is sensors. Sensors capture the necessary data, such as acceleration, pressure, temperature, and brightness that billions of connected IoT devices need to send and receive information. The massive amounts of data that is captured by each sensor can be monitored, controlled, and integrated through IoT.

One popular IoT technology is home automation devices, which range from security systems and climate control to automated televisions, dishwashers, laundry machines, and other appliances. Home automation is expected to include more sophisticated functionalities in the future. Its devices rely on sensors to track the activity of inhabitants in a home, as well as the surrounding conditions that affect them. In turn, sensors must be optimized to provide accurate data to feed into the automation system.

A good number of the sensors involved in home automation systems are placed outdoors, such as door and window sensors for home security, temperature and weather sensors for climate control, and different devices for automated sprinkler systems and outdoor lights. Besides residential homes, the Internet of Things has developed uses in different environmental applications that may need sensors to monitor different climate activity. These devices must be able to perform effectively in all types of weather, even in times of high humidity and inclement storms. To optimize sensors for all environments, we need to study how condensation affects device performance.

Analyzing properties of transport and diffusion in an electronic box will show how sensors perform in climates with various temperatures, air pressure levels, and water vapor concentrations. COMSOL Multiphysics® has a simulation software tutorial that shows how to simulate the effect of a drop in air pressure due to a storm by tracking the relative humidity inside an electronic enclosure over the course of one day. All relevant physical mechanisms such as air flow, heat transfer, and water vapor diffusion are accounted for in a fully coupled manner. 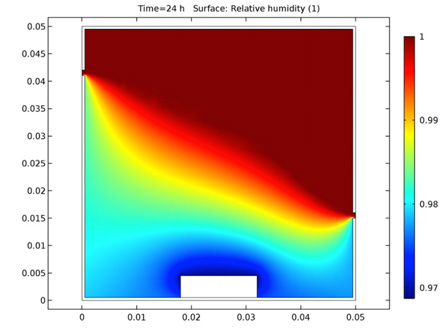 The relative humidity within a box containing an electronic sensor that provides heat to its surrounding environment. Two small slits, on each side of the box, allow the conditions within the box to be affected by the external environment. Image credit: COMSOL.

With the simulated data, you can find the maximum relative humidity inside the box and determine if condensation occurs. You can adjust the parameters in your own design to ensure that your outdoor sensors and electronic devices are better protected from condensation and perform well in all types of weather.

Wearables are another major part of the Internet of Things. The most common examples on the market are smart watches and glasses, but there are also applications in health monitoring devices, prosthetics, entertainment equipment, and future lifestyle uses. These devices use sensors with the potential to track every activity and physical state of the person wearing them – information such as our body temperature and heart rate as well as the sound and movement we produce. Wearable devices tend to be worn over a long period of time. How these devices heat up during this time is an important design consideration. They must be kept cool for the user to remain comfortable as well as to avoid system malfunctioning from overheating. The sensors also need to be optimized for minimal sensitivity to temperature variations.

Analyzing thermal expansion in a MEMS device helps designers to understand and improve the temperature performance of the device. This COMSOL Multiphysics® software simulation demonstrates the analysis of temperature effects with consistent coupling between the heat transfer physics and the solid mechanics physics. 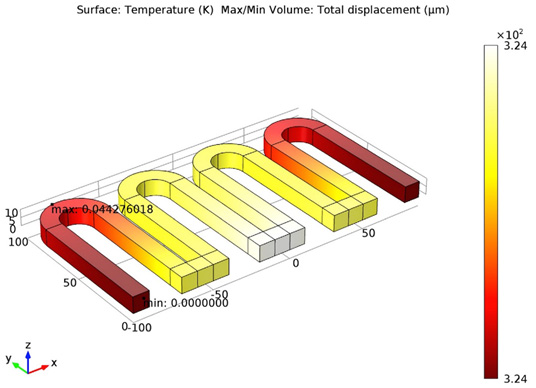 The temperature profile in a MEMS device, where thermal expansion should be minimized. Also given is the point on the MEMS device of maximum expansion, and its value. Image credit: COMSOL.

When designing devices capable of taking on the developing world of IoT, there is more to think about than just RF components. Design engineers must take other elements, such as MEMS sensors, device packaging, and cooling into consideration. Simulation software enables you to study how all of these different aspects interact in order to optimize your IoT device designs. Thanks to COMSOL for help with this information.

We appriciate the article and we are very...

This article is very good and we are...

Electro-optical oscillator based synthesizer that generates frequencies up...