We use cookies to provide you with a better experience. By continuing to browse the site you are agreeing to our use of cookies in accordance with our Privacy Policy.
Home » Blogs » Gary Lerude, MWJ Technical Editor » Remembering Richard Mumford 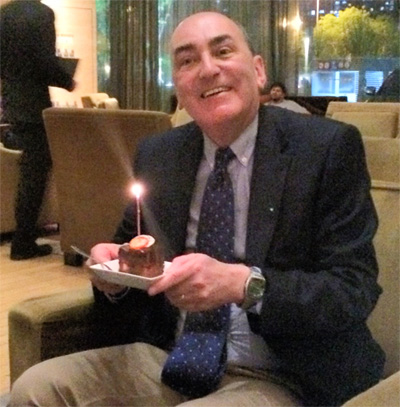 Richard Mumford, Microwave Journal’s international editor, suffered a cardiac arrest on 25 April. Tragically, he never recovered consciousness and died on 5 May, leaving his wife and son. His memorial service was today.

I first met Richard at the European Microwave (EuMW) conference in Rome, the fall of 2014 and a few weeks after I joined Microwave Journal. I came to know him much better the following January, when he and I were dispatched to Beijing to promote attendance and exhibitors at the EDI CON conference.

We were shepherded by Adonis Mak, the publisher of Microwave Journal’s Chinese language edition, who organized our meetings, kept us from getting lost in Beijing and ensured we ate well — indeed, we ate far too much food.

Richard and I bonded on that trip: during the meals, as we challenged each other to try unfamiliar dishes, and the long taxi rides, where we often closed our eyes, grimacing, astounded that the cars came so close to each other without crashing. We spent hours sharing perspectives that week, and I quickly came to enjoy and marvel at Richard’s quick wit and British humor.

There’s no better example of this than an email exhange we had at the beginning of this year. I covered for Richard during the Christmas holidays. When he returned, I couldn’t resist sending him the following email:

Happy New Year, Richard. Hope you had a relaxing holiday and recharged your batteries for what promises to be an eventful year [little did I know]. I only received one message for you while you were out. The Queen invited you to tea on New Year’s Day. I told her you were committed to another engagement and regretfully declined. She said she understood.

To my delight, he responded with full wit:

Hi Gary. Thank you. I hope you had a great time over Christmas, as well, and a Happy New Year to you, too.

I am so sorry that you have been drawn into the Queen’s increasing obsession with me. She keeps asking for me to “just pop round,” but if last time is anything to go by, it won’t end there. I thought we would be able to draw a line under this in 2017, but for this to resurface on the very first day of 2018 is disappointing and slightly unnerving.

I am reluctant to take out another court order, as no one wants a woman in her nineties to be subject to restraint, but it really does have to stop — not just for me, but when it affects the whole family and now my work colleagues, it has gone too far.

Can I suggest that if it happens again, you contact the relevant authorities, either here or in the U.S. and, whatever you do, don’t offer her any further encouragement, which was my initial mistake. My apologies again.

We tried to capture Richard’s humor and quick wit on video, when we recorded Frequency Matters at the IMS or EuMW trade shows. He always was quite nervous in the presence of a video camera, even finding it difficult to sleep the night before. So he excused himself from Frequency Matters; however, he continued to dutifully interview company executives on camera, most recently at this year’s Mobile World Congress.

While video was not his strength, Richard was a very accomplished print editor, the consummate professional. He always met deadlines and was a stickler for details, not wanting to leave any aspect of the process undefined. If I were slow to respond to his email, particularly one containing an article, he would patiently follow up, acknowledging that he knew I was busy, apologizing for “nagging,” yet firmly asking for confirmation.

Richard always wrote a long article reporting on the European RF/microwave market for the annual EuMW issue, which was affectionately known as “the full Mumford.” For that issue, we would allow him to spell defense as defence.

I last saw Richard in February, when we attended Mobile World Congress in Barcelona and shared a two-bedroom Airbnb. It was a high time, in the heart of the 5G action, full of interesting discussions, good food and laughter.

Sometime during that week, in a casual moment, I asked Richard what his ideal job would be if he could pick any publication to write for. He said he’d love to be a sports writer covering the horse races and jockeys. Sadly, he won’t have that opportunity.

I mourn the loss of a colleague who became a dear friend. Reminded of Richard almost daily, I can still hear his voice and laugh. Miss you, my friend.