We use cookies to provide you with a better experience. By continuing to browse the site you are agreeing to our use of cookies in accordance with our Privacy Policy.
Home » Blogs » Gary Lerude, MWJ Technical Editor » Skyworks Tops $1B in Quarterly Revenue

Skyworks Tops $1B in Quarterly Revenue

Reflecting strong demand from wireless applications, Skyworks exceeded $1 billion in quarterly revenue for the first time, generating $361 million in cash from operations to end the quarter with $1.7 billion in cash and no debt.

Revenue during the first fiscal quarter of 2018 was $1.05 billion, up 7 percent sequentially and 15 percent year-over-year. Skyworks benefitted from the iPhone launch, generating slightly more than 75 percent of the quarter’s revenue from mobile, the remainder from what Skyworks calls “broad markets” — largely Wi-Fi and IoT. 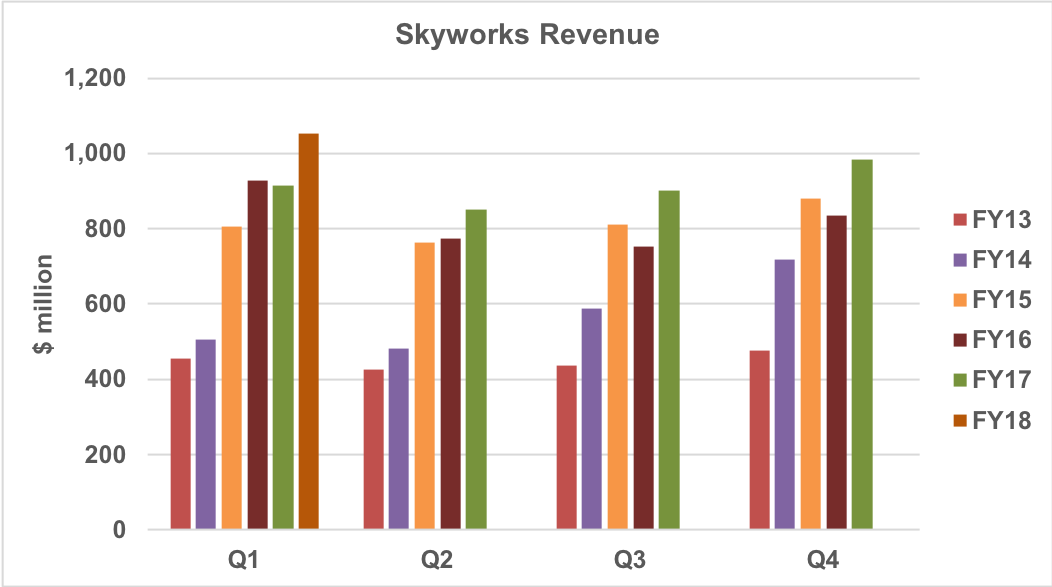 Skywork’s non-GAAP gross margin was 51.4 percent and the non-GAAP operating margin reached 39.4 percent, compared to the company’s model of 53 percent and 40 percent, respectively.

A press release announcing the quarterly results contained a long list of mobile and IoT wins, including

Skyworks’ guidance for the March quarter is revenue growth between 6 percent and 8 percent year-over-year, which would be $911 million at the midpoint of the range and represent a sequential decline of 13 percent.

Liam Griffin, Skyworks CEO, sees mobile growth accelerating during the second half of the calendar year, aligned with the next iPhone launch. He said revenue in the broad markets segment is not as seasonal, growing consistently for the foreseeable future — in the mid-teens — because of the large number of customers and opportunities. Griffin expects 5G to contribute material revenue in 2019 and will be steady over several years.