We use cookies to provide you with a better experience. By continuing to browse the site you are agreeing to our use of cookies in accordance with our Privacy Policy.
Home » Blogs » Mobile Experts - Joe Madden » The Impact of CMOS Power Amplifiers on the Handset

Mr. Madden founded Mobile Experts in 2002 and today serves as its principal analyst, Radio Access and RF Semiconductors. He has twenty-four years of experience in wireless hardware, supplying amplifiers and filters into both base station and handset applications.

The Impact of CMOS Power Amplifiers on the Handset

Qualcomm recently made a big splash, announcing their RF360 product to accompany its transceiver and baseband chipsets for mobile handsets.    To old radio guys like me, this brought back memories of the first integrated CMOS transceivers for mobile handsets.   Back in the early 1980s, with AMPS cellular systems, the handset used discrete components in the transceiver.   By the 1990s, when 2G systems were starting to ramp up, Qualcomm and other baseband modem suppliers suggested a migration to CMOS transceivers.

Back in 1993, many RF engineers scoffed at the idea of an integrated CMOS transceiver.   Comments like “You’re going to sacrifice sensitivity”, or “you won’t get enough linearity in your front end” were common.    But here we are.   Twenty years later, it’s impossible to find a discrete handset transceiver anywhere in the world.

It’s true that the systems engineers sacrificed noise figure and linearity and a few other metrics to achieve the flexibility and low cost of CMOS transceivers.   But the benefits of 2G standards (coding gain for CDMA, or wider FM bandwidth for GSM) made up for these sacrifices and it worked out okay.

We will see the sequel to this story with CMOS power amplifiers.   The market for GaAs power amplifiers was already slowing, as multi-mode, multi-band PAs (MMPAs) take hold and limit market growth by scaling up for additional frequency bands.    Qualcomm’s entry into the PA market will be followed by companies such as Intel, Mediatek, Broadcom, and others, bringing additional competition with products that hold the potential for low cost.  In our forecast, the overall RF front end market will grow by 15% annually for the next 5 years, but the PA market growth will be much weaker, at 6% or possibly lower due to a combination of MMPA adoption and price erosion.

Will we sacrifice performance with CMOS PAs?  Of course.   But the network is also changing.    Instead of transmitting signals to a tower 2 miles away, the network of 2018 will involve indoor small cells with a link distance less than 50 meters in many cases.    With this kind of transformation in the network, we believe that the last 5 percentage points of PA efficiency may not be as important as it was in the past.    Just as with integrated transceivers, the sacrifices that we make in performance can be overcome in other ways. 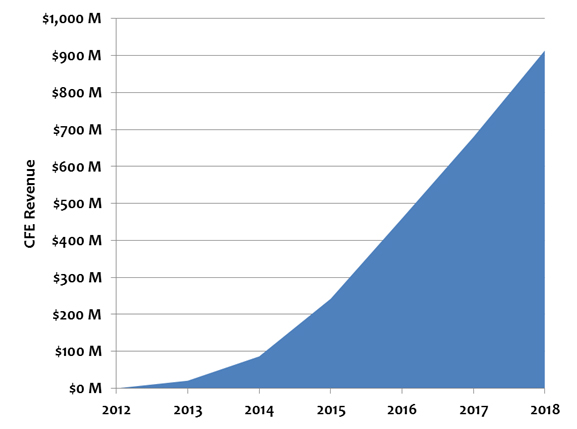 The entry of companies like Qualcomm, Mediatek, and Intel carries another major impact:  Integration.    Until now, the concept of a Complete Front End (CFE) which integrates the power amplifier, filters/duplexers, and switches has remained at the fringe of the market, because the lack of flexibility in such a module made integration of these components unattractive.    However, with the baseband modem supplier behind it, this kind of module could become a good option for the feature phone and entry-level smartphone markets.    The plain-vanilla combinations of frequency bands (Bands 1, 3, and 8 in Europe and Asia or Bands 2, 4, and 5 in North America) represent a market in the hundreds of millions of units per year.    If we see competition between Qualcomm and Mediatek for the “Chinese white box” market, with each company providing complete chipsets that take care of baseband to the antenna, the existing suppliers could lose a sizable chunk of the total market. 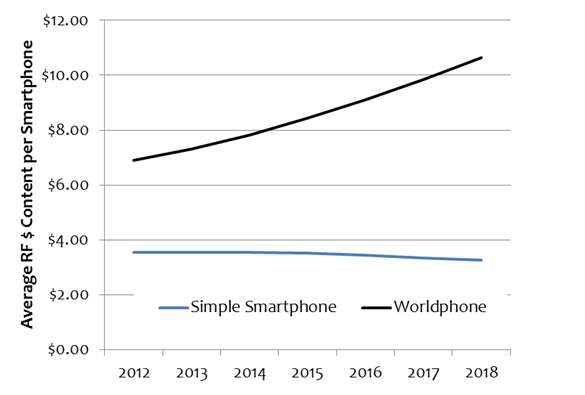 In fact, if the baseband vendors drive price erosion as expected in Complete Front Ends, the total RF dollar content in an entry-level smartphone will hit a peak in the 2014 timeframe, and begin to decline after rising during the past few years.     Worldphones (smartphones with 4 or more data bands) will continue to grow in complexity and demand more RF content, as the number of bands expands to 10 or even more.

In the end, we expect the Complete Front End (CFE) to be an important part of the middle tier of the market.   The flagship 10-band phones are unlikely to use an all-inclusive Front End Module.   The investment required to create a new CFE for each combination of frequency bands will be too high for most high-end worldphone applications.    But the plain-vanilla smartphone from a smallish Chinese supplier is likely to use a CFE that can be sold in hundreds of millions.    The OEMs will welcome this kind of product, so that they can focus on software instead of RF hardware design.      Look out, Skyworks, here comes Qualcomm.