We use cookies to provide you with a better experience. By continuing to browse the site you are agreeing to our use of cookies in accordance with our Privacy Policy.
Home » Blogs » Tek Talk » Part 3 of 3: Swept or Stepped: The Architectures of Spectrum Analyzers

The Tek Talk blog features contributions from a collection of RF and microwave test and measurement experts at Tektronix. The focus is on providing tips and strategies to help RF designers and engineers perform measurements more effectively, whether they are engaged in WLAN, radar and electronic warfare, EMI conformance testing or spectrum management.

Part 3 of 3: Swept or Stepped: The Architectures of Spectrum Analyzers

This has developed some of the important figures of merit when considering the use of a spectrum analyzer: speed, dynamic range, bandwidth, and minimum event duration for 100% probability of intercept.

Now let’s look at the exact same signal on each of the different architectures and describe the differences in the observed signal.  The signal of interest is a frequency hopping signal that dwells at three separate frequencies a couple MHz apart at a carrier frequency around 2.4 GHz.  The signal tunes, overshoots, settles, and dwells at each frequency for all in about 400 us before sequentially changing to the next frequency in a repetitive pattern.  Thus, there are about 2500 transitions per second. 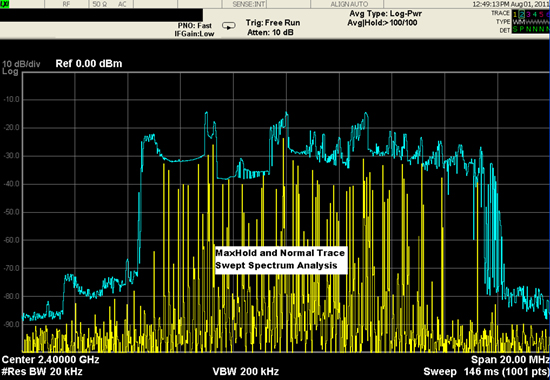 As shown in Figure 1, the swept architecture takes 146 ms to sweep across 20 MHz in a 20 kHz RBW.  During this swept time, there are 100’s of transitions and dwells.  Because the analyzer is sweeping, and the RBW limits the observable bandwidth, spectral events are represented as single narrowband amplitude events.  Using the maximum hold trace, you can collect andobserve a signal over a period of time and get a rough view of the overall bandwidth the signals occupy.  However, the signal behavior is hardly visible or intuitive from the spectrum display for this type of signal.

Time overview not possible at the same time you are viewing the spectrum, but a time overview will only show you the amplitude vs time within the RBW setting.  This signal might not be changing amplitude, but it is changing frequency.

Since the stepped analyzer has the ability to see the entire bandwidth of the signal in the IF, the vector analyzer shown in Figure 2a below allows you to see the Frequency vs Time and the Spectrum at the same time for this signal.  The horizontal time domain display is set to 200us/division, and the frequency vs time trace shows the frequencies and transitions of the signal of interest for an entire sequence. 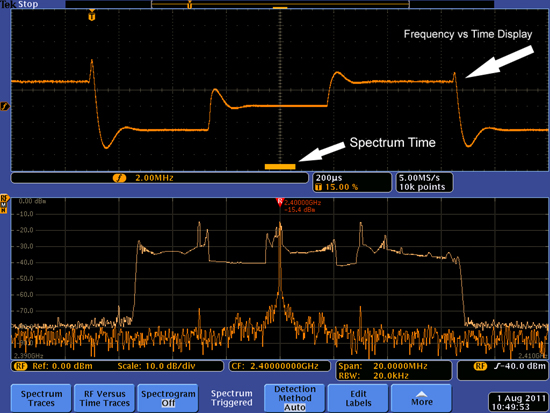 Figure 2a.  A vector signal analysis FFT computed during a dwell period.

With the flexibility to view the time-domain behavior of the signal and the frequency-domain behavior, now comes the requirement to show the correlation between the domains.  The Spectrum Time shows the acquisition time required to compute the correlated spectrum display.  At a 20 kHz RBW (Kaiser Window), the acquisition time associated with the spectrum calculation is about 112 us.  This is over 1000 times faster than the sweep of the spectrum analyzer across the same span. 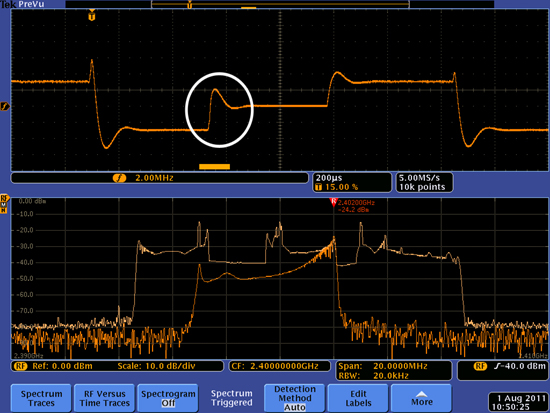 The real-time analyzer is based on vector signal analysis technology, so it also allows the time-domain and frequency-domain views of a signal to be observed.  In addition to the vector analysis capabilitity, the real-time processing engine in the analyzer enables a continuous and persistent view of the spectrum display. 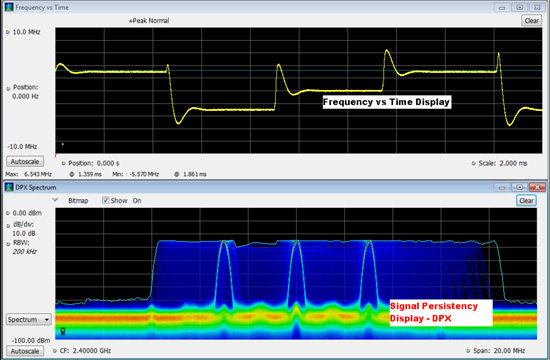 Figure 3. The Real-time Analyzer can show the long-term persistency of the signal.

Figure 3 shows a color graded temperature scale of the persistency display (DPX).  Red colors, like the noise, occur most often, while blue occur infrequently.  It is instantly observed in the persistency display that this signal appears to have three quasi-stable states at three different frequencies.  It is also easily seen using the MaxHold trace on the DPX display (green trace), that the observed spectrum is actually at a higher level than what has been observed on the swept analyzer and the vector signal analyzer.

This last part relates to the Probability of Intercept and the ability of the real-time analyzer to see all the spectrum signals for very fast events.  The minimum event duration is as fast as 3.7us.