We use cookies to provide you with a better experience. By continuing to browse the site you are agreeing to our use of cookies in accordance with our Privacy Policy.
×
Stay Connected :
Home » E-Band mmWave Technology for HAPS and LEO Satellite Systems

Along with low earth orbit (LEO) satellite constellations, high-altitude platform station (HAPS) systems—or high-altitude pseudo-satellites—operating in the stratosphere, have the potential to address the challenge of providing ubiquitous connectivity. Although there has been great progress in rolling out high speed mobile networks to serve major centers of population, terrestrial connections will never realistically cover every part of earth’s surface. To deliver the full promise of 5G and address the ‘digital divide,’ it is essential to provide coverage to low population areas where terrestrial mobile networks are not viable. This will be particularly important not only for improving personal communications, but also because many Internet of Things (IoT) sensors will need to be in these regions. This article gives an overview of the role of HAPS and satellites in forming “networks in the sky” and describes some of the RF challenges in designing the high data rate (10 Gbps-plus) communication links needed to backhaul data between earth and the satellite or HAPS, and between the platforms themselves.

Successive generations of mobile communications technologies have been effective in covering the most highly populated areas of the world, and modern life has come to depend on this ubiquitous connectivity. Mobile network operators in most developed countries have worked hard to meet their targets of connecting typically around 98 percent of the population in terms of where they live. However, the 5G goal of being able to connect everything —wherever it is on the planet—remains elusive for terrestrial mobile systems. A ‘digital divide’ has been created between populations who have a broadband connection, whether fixed or mobile, at an acceptable speed and those who do not. The FCC currently defines this benchmark as 25 Mbps, which places some rural parts of the U.S. on the wrong side of the divide. Furthermore, mobile platforms such as aircraft and ships, along with many IoT devices located in isolated areas, will most likely fall outside the range of terrestrial 5G telecommunications systems. 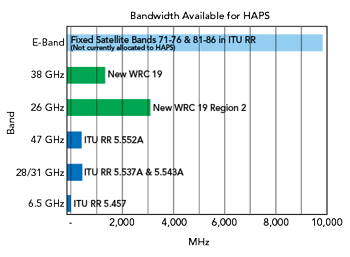 This ambition to connect everyone and everything, wherever they are located, therefore cannot be fulfilled by ground-based communication networks alone. Therefore HAPS, operating in the stratosphere at an altitude of around 20 km, along with constellations of LEO satellites at an altitude of between 350 and 1,100 km, are beginning to be deployed to help address the challenge of providing ubiquitous connectivity. A HAPS station comprises an unmanned aerial vehicle - which may be either a gas-filled balloon, an airship structure or a fixed wing aircraft—and a payload that is essentially a moving 5G base station with onboard solar panels or fuel cells to provide power. As the technology evolves, we can expect to see non-terrestrial networks being converged with terrestrial infrastructure, as shown in Figure 1. This introduces some interesting technical challenges in creating reliable links between each of the elements of these converged networks.

As demand for broadband capacity from these space and airborne systems grows, additional spectrum will be needed to support it. The telecommunications industry has successfully lobbied for more spectrum for HAPS, and the allocation of new wider bands around 26 and 38 GHz was agreed to during the 2019 World Radio Conference. In addition, experimental licenses were granted for E-Band (71 to 86 GHz), supporting the growing interest. Figure 2 summarizes the current and proposed bands, along with showing the geometry of the HAPS link to its ground station. There are commercial transceivers and high-power amplifiers available in these frequency ranges. Many have proven effective in XHaul (fronthaul, backhaul and midhaul) applications. Further development and qualification of these systems are exploited in the links that feed data between earth and the HAPS constellations.

Figure 2b Geometry of HAPS station and link to ground station.

While HAPS networks will mostly communicate directly with existing mobile phones, LEO satellite constellations will also generate the need for huge numbers of new fixed consumer terminals. As a result, this will create a demand for high volumes of components operating at frequencies up to 55 GHz where production volumes are historically low. The increase in manufacturing volume presents a challenge not only for OEMs but also for test equipment manufacturers. Simultaneously, it also offers new opportunities for companies who design and manufacture mmWave components and subsystems.

The HAPS Alliance was formed in February 2020 with the aim of creating an ecosystem to promote the use of high-altitude stratospheric vehicles to extend connectivity to more people and locations worldwide. The alliance is based on an earlier initiative by HAPSMobile (a joint venture between Softbank and AeroVironment) and Alphabet’s Loon* to work together to advance the use of HAPS.

In addition to these companies who are developing the high-altitude platforms themselves, the alliance now counts among its members: telecommunications providers, including AT&T, Bharti Airtel, China Telecom, Intelsat, T-Mobile and Telefónica; aviation and aerospace companies like Airbus Defense and Space and Raven; and technology providers, including Ericsson, Nokia and Filtronic.

Further evidence of the growing interest in HAPS technology has been demonstrated by the formation of a Non-Terrestrial Connectivity Solutions project group within the Telecom Infra Project, an engineering-focused collaboration sponsored by Facebook.

There are several use cases for which HAPS technology is uniquely well suited, mostly related to their potential for extending enhanced mobile broadband to areas that are difficult to reach or not served by terrestrial mobile for economic reasons. These can include mountainous terrain, remote islands, marine regions and developing countries. A further application is mobile cell connectivity for passengers on board vessels or aircraft, or hybrid connectivity to reach passengers on board public transport vehicles like high speed trains, buses or river boats. They can also deliver fixed wireless access for users in isolated villages or remote industrial premises that cannot be reached by fiber.

Yet another use case is to supplement the capacity of existing networks to meet accelerating demand, and to supply “instant infrastructure” in emergency situations or for disaster relief. This can ensure network resilience for critical network links that require high availability. They can be rapidly deployed to cover a footprint of approximately 100 to 140 km diameter, over any type of terrain, requiring only minimal ground infrastructure.

HAPS can potentially be used to rapidly deliver media and entertainment content in multicast mode to RAN equipment at the network edge, to reduce latency for 5G cellular users, or in Direct-To-Node broadcast, whereby TV or multimedia services are delivered direct to home premises or to users on board a moving platform.

Utilizing their capacity rather than bandwidth, HAPS can be exploited for Massive Machine Type communications, to communicate with both local area and wide area IoT services. 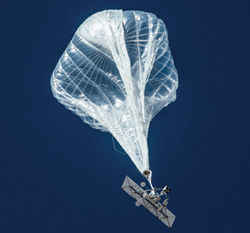 While it may appear that HAPS and LEO satellites both perform the same function, they are complementary. LEOs move rapidly in orbit relative to the earth so are more difficult to coordinate but have a wider area coverage. HAPS, being closer to the earth’s surface, are much easier and less costly to launch and deploy and give much lower latency. They feature “persistence”—the ability to remain stationary relative to the ground—and their transmissions are less affected by obstacles such as trees and buildings than terrestrial base stations. Unlike satellites, HAPS can be returned to earth for maintenance or payload re-configuration. They can quite literally be used as “base stations in the sky” providing additional capacity and wide cellular coverage in low density areas. They can also use the same frequency bands as terrestrial 3G, 4G or 5G networks, subject to regulatory approval, which means that the design of HAPS payloads should benefit from technology developments in 5G terrestrial base stations.

Experimental work with HAPS for communications relay has been taking place since the late 1960s,1 but it is only since the growth of mobile Internet that their commercialization has accelerated. There are some differences between the two types of HAPS. For example, the solar-powered unmanned aircraft manufactured by AeroVironment and deployed by HAPSMobile are heavier than air and can only carry relatively small payloads. Another, fuel cell-powered fixed wing platforms, like those from Stratospheric Platforms, are emerging, which can carry much larger payloads. Finally, the airship-style platforms, along with the balloon platforms being used by Loon, are lighter than air and can usually carry a heavier payload as shown in Figure 3. These airships have been deployed to extend mobile networks over some regions of Africa and South America. What the two styles of platforms have in common is the flexibility to be upgraded to newer technologies, and their multi-purpose capability, as they can be adapted for institutional, commercial communications or civil security applications. They are payload-agnostic and can readily be networked together and linked with other platforms.