We use cookies to provide you with a better experience. By continuing to browse the site you are agreeing to our use of cookies in accordance with our Privacy Policy.
Home » Wideband 2 to 67 GHz Envelope Detector 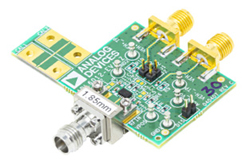 The ADL6012 is a versatile, broadband envelope detector that operates from 2 to 67 GHz. The combination of a wide 500 MHz envelope bandwidth and a fast 0.6 ns rise time makes the device suitable for a wide range of applications, including wideband envelope tracking, transmitter local oscillator leakage corrections and high resolution pulse (radar) detection.

The ADL6012 uses Schottky diodes in a two-path detector topology. One path responds during the positive half cycles of the input and the other responds during the negative half cycles of the input, achieving full wave signal detection. This arrangement presents a constant input impedance throughout the full RF cycle, preventing the reflection of even order harmonic distortion components back toward the source. This reflection is a well-known phenomenon of widely used, traditional, single-Schottky diode detectors. Detector response time at lower RF frequencies is also improved with symmetrical detection.

The response of the ADL6012 is stable over a wide frequency range and features excellent temperature stability. Enabled by propriety technology, the device independently detects the positive and the negative envelopes of the RF input. Even order distortion at the RF input due to nonlinear source loading is also reduced when compared to classic diode detector architectures.

The quasi differential output interface formed by the VENV+ and VENV− pins has a matched, 100 ohm differential output impedance designed to drive a 100 ohm differential load and up to 2 pF of capacitance to ground on each output. The output interface provides the detected and amplified positive and negative envelopes, which are level shifted using an externally applied voltage to the VOCM interface. This configuration simplifies interfacing to a high speed analog-to-digital converter. The ADL6012 is specified for operation from −55°C to +125°C and is available in a 10-lead, 3 x 2 mm LFCSP.