We use cookies to provide you with a better experience. By continuing to browse the site you are agreeing to our use of cookies in accordance with our Privacy Policy.
×
Home » How Drone Technology Will Revolutionize Satellite Antenna Testing

It is an exciting and dynamic time for the satellite industry. The number of satellites in orbit and satellite antennas on the ground is rapidly increasing. New constellations, geostationary orbit (GEO), low earth orbit (LEO) and medium earth orbit (MEO), new frequency bands and multiple uses of existing frequency bands (HTS, or high throughput satellites) - all contribute to a new frontier in satellite communications. Consequently, the potential for signal interference is a rising problem for the SATCOM industry.

Satellite operators partially address this problem with antenna performance requirements, such as the satellite operator’s minimum antenna performance (SOMAP) requirements. This entails extensive antenna testing for manufacturers and service providers to be able to demonstrate and ensure performance. Antenna testing can be expensive and logistically difficult, so change is needed or it will restrict industry growth and innovation.

Using advanced drone technology coupled with advances in microwave technology, a new RF payload and unique pre- and post-flight software has been developed so that satellite antennas can be tested anywhere - easily and effectively (see Figure 1). In recognition of this innovative new approach, the European Space Agency has awarded a contract to QuadSAT and its partners - the Global VSAT Forum (GVF) and the Danish Technological Institute - to evaluate this antenna test system.

This paper will explore the current challenges faced with satellite antenna testing and how drone technology can enable new cost-efficient testing models. It will elaborate on how this technology works, exploring both the drone technology and testing procedures, as well as mentioning some use cases.

The number of satellites in orbit has steadily grown over recent years. With large constellations launching over the next few years, the satellite environment will become even more crowded. However, the satellite industry has experienced some slowdown and difficulties due to the COVID-19 pandemic. A survey by Northern Sky Research (NSR)1 indicated that 44 percent of satellite companies have experienced a significant impact due to COVID-19 with 48 percent believing it will significantly impact the business in 2020-2021. The long-term prospects look more positive, with 40 percent believing that it will take six to 12 months for the satellite industry to recover. At the same time, the survey1 also suggests that if a handful of companies succeed, the next decade will see more satellites put into orbit than all the satellites launched since Sputnik 1 in 1957.

Due to a larger number of satellites in orbit, there will be more ground infrastructure deployed too. In addition, large numbers of comms-on-the-move (COTM) antennas are being deployed, especially in maritime and aerospace markets. COTM antennas have increased the complexity with new architecture and tracking software. New antenna designs differ significantly from emerging antenna technology such as flat panel and electronically steerable antennas. Therefore, satellite operators need more test data to calculate link budgets. These changes lead to the requirement for more testing. Consequently, the leading satellite operators worked together to develop and introduce the SOMAP Requirements in 2017. The purpose of SOMAP is to ensure an industry-wide antenna qualification framework through an agreed minimum testing regime for COTM products.

For LEO, the way the antennas operate is very different from the ones used for GEO because they have different requirements. For example, since LEO satellites move faster than the Earth’s orbit, antennas need to track the satellites (either mechanically or electronically) as they move across the sky. To serve seamless connectivity, LEO antennas handover satellites typically every five to 15 min.

Errors occur in any satellite network for many different reasons. Research conducted by the Satcoms Innovation Group a few years ago (as the Satellite Interference Reduction Group at the time) indicated that the highest percentage of interference was caused by human error, followed closely by equipment failure. Antenna flaws can cause serious errors for satellite communications, including mis-pointing, which may lead to satellite interference. 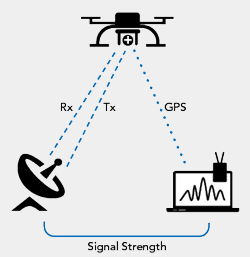 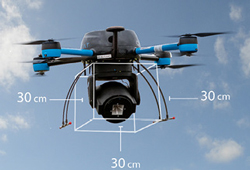 There are multiple test standards set out by governments or commercial bodies in terms of antenna testing. Current test ranges are at the core of these standards and many of the requirements have been set, based on their technical capabilities and limitations. The drone-based measurement method differs significantly from the traditional method and provides a new set of unutilized advantages.

Over the past year, companies have extensively researched, tested and evaluated the necessary components and steps required for the development of a successful, portable and high precision drone-based antenna test range. A drone-based alternative must facilitate a wide variety of testing scenarios for antenna manufacturers, satellite operators and service providers.