We use cookies to provide you with a better experience. By continuing to browse the site you are agreeing to our use of cookies in accordance with our Privacy Policy.
×
Home » Intelligent Connectivity - 2019 MWC Los Angeles
Industry News 4G/5G/Cellular Under the theme of Intelligent Connectivity, MWC19 Los Angeles showcased the convergence of Artificial Intelligence, IoT and Big Data enabled by 5G taking place Oct 22-24. This used to be CTIA but GSMA took it over recently so has re-branded it as MWC Los Angeles and they have MWC in Barcelona and Shanghai so cover the globe now with Barcelona being the marquee event.

MWC featured the mobile industry’s commitment to the UN Sustainable Development Goals, particularly in driving gender inclusion with the Women4Tech program; positively impacting climate action, on the heels of the industry’s commitment to reach zero emissions; and through the Youth Mobile Festival in driving inclusive and quality education. They reported 22,000 total attendees from more than 100 countries, including over 225 media and industry analysts reporting the many developments coming out of the event. 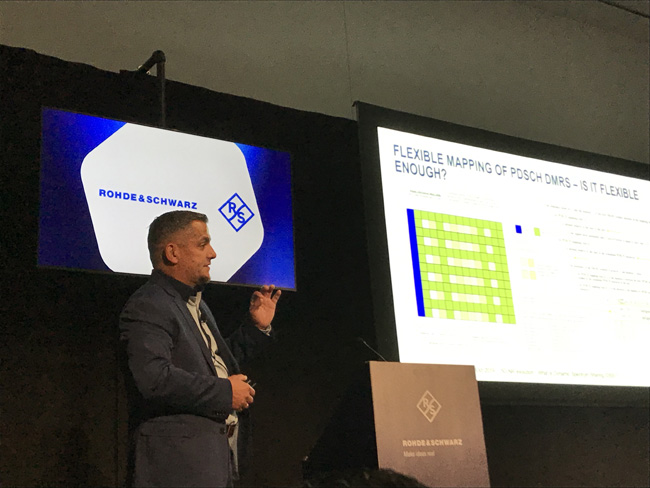 Dynamic Spectrum Sharing was a big topic as this allows mobile networks to tranmit both 4G LTE and 5G signal over the same spectrum allowing a nice transition to 5G. This is especially critical in the low band where there are not a lot of users so dedicating just 5G usage there would be way too expensive to deploy. R&S gave a great technical talk on DSS to a packed room of interested attendees.

The other interesting topic for me is still the 5G mmWave module approaches that we have been following for a couple of years now. At the event, we saw Movandi and KT Corp. announced they will demonstrate an O-RAN 5G mmWave radio unit, Pivotal was doing a demonstration of their unit relaying a signal around a corner into an indoor unit, Sivers and NXP announced they will produce 5G NR RFICs and phased-array antennas, targeting applications such as fixed wireless access and Antenna Company showed me a polymer-based dielectric resonator phased array antenna technology that increases beam steering angles and gain for mmWave modules. 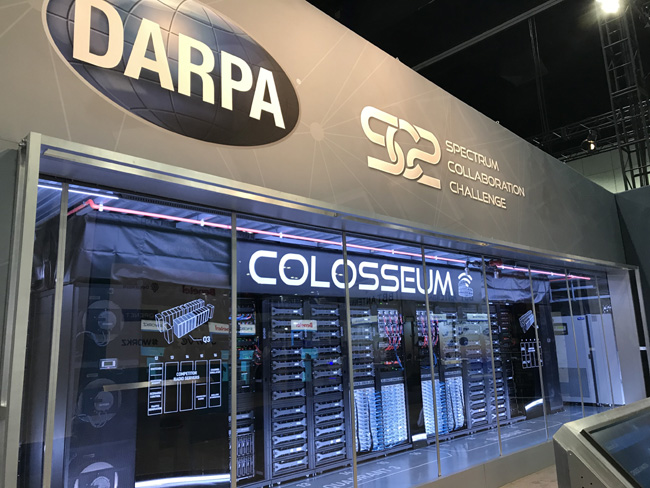 One of the most interesting events that took place at MWC19 Los Angeles was DARPA’s Spectrum Collaboration Challenge (SC2) as DARPA held the final elimination rounds on site Oct 23. As spectrum has become very scarce and expensive, DARPA wanted to see if artificial intelligence could manage radio resources automatically and enable faster speeds with our given resources. They challenged entrants to develop algorithms for wireless systems that can autonomously collaborate and work with each other to share the RF Spectrum. DARPA designed various scenarios of real-world situations to test the teams collaborate radio designs. The challenges were done on the world’s largest RF channel emulator called the Colosseum. It has 256 USRP X310 radios with a massive computer system to measure how the radio algorithms perform in each situation. The Colosseum has 900 TB of network attached storage, 171 high-performance servers, 18 10G switches, 25.6 GHz of instantaneous bandwidth, 52 TB/s digital RF data and 320 FPGAs.

SC2’s final 10 competitors and their AI-enabled radios went head-to-head during six rounds of competitive play. GatorWings, a team of undergraduate students, Ph.D. candidates, and professors from the University of Florida, were the winners of the SC2 3-year competition, taking home first place and the $2 million grand prize. It is hoped that this research will lead to wireless systems that can provide better efficiency of RF spectrum as some of the competitions showed about a 300% increase in spectrum utilization over what can be attained today. View the final round and awards below.

Here are the highlights from the companies we visited at the event or covered their news while on-site: 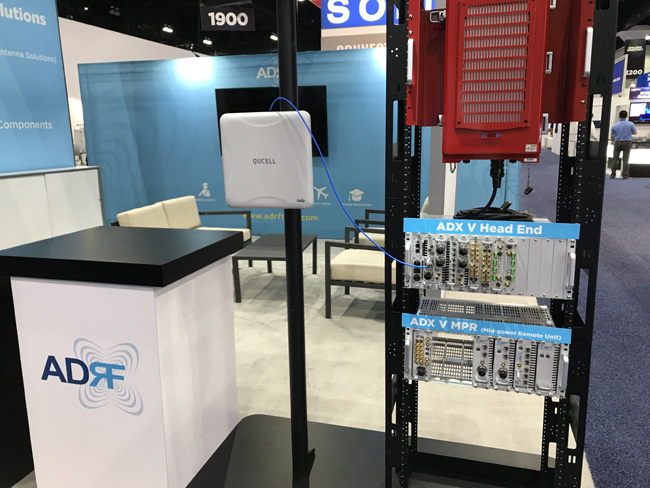 Antenna Company announced the industry’s first 5G dielectric resonator phased antenna array designed specifically for 5G mm-wave applications. The 64-antenna DRA combines patented Antenna Company’s SuperShape™ and DRA technology to achieve wide-band operation over the 24-30 GHz frequency bands.   The mm-wave DRA array demonstrates reduced scanning losses, lower sidelobe levels and greater maximum scan angle compared to a conventional patch array using the same configuration and inter-element separation.   The design achieves over 40 dBm of peak EIRP, which is ideal for use in customer-premise-equipment (CPE) products.   The design is scalable to support 37-40 GHz frequency bands for global band support across the mm-wave spectrum. We hope to have a lead article on this technology in our Feb issue. 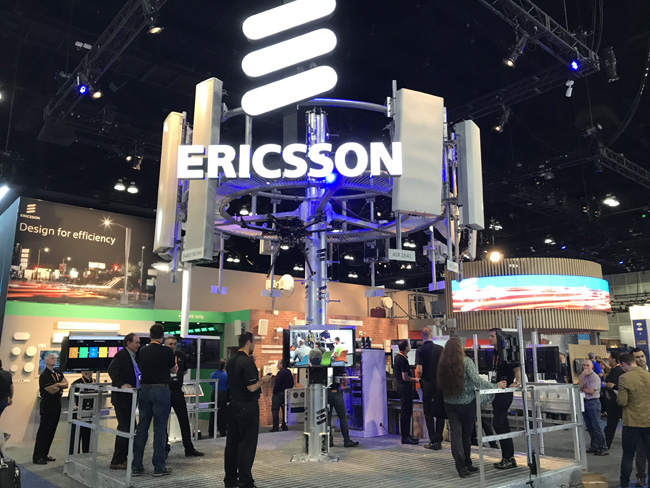 Ericsson recently completed its acquisition of the antenna and filter division of Kathrein, a world leading provider of antenna and filter technologies with headquarters in Rosenheim, Germany. Ericsson will be providing its customers a broadened Ericsson Radio System offering. In addition to expanding Ericsson’s portfolio of antenna and filter products, the acquisition will bring vital competence necessary to evolve radio access products. Ericsson has gained R&D, production, and sales locations based in more than 20 locations including Germany, Romania, the U.S., Mexico, and China. 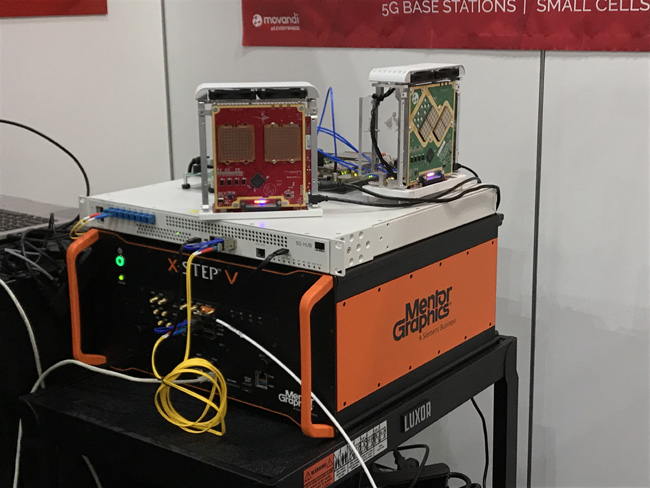 Movandi and KT Corporation announced that they will jointly demonstrate an O-RAN 5G millimeter wave radio unit. Multi-party collaboration with Xilinx and SOLiD (the leading O-RAN solution provider) allowed KT to develop a 5G mmWave radio unit that uses Movandi’s BeamX technology, including RF front-end, antennas and software algorithms. Movandi’s high performance 5G mmWave solutions provide the flexibility, scalability and performance to meet the needs of the O-RAN Alliance communities and requirements across a complete range of installations and applications, meeting the needs of tier 1 operators. They showed a demo at the event including a live link of the system.

Murata recently announced that it is working to develop an RF module solution for Terragraph, a gigabit wireless technology developed by Facebook that is designed to meet the growing demand for reliable, high-speed internet access in urban and suburban environments. Terragraph is enabled in part by placing millimeter-wave RF modules at 200 to 250 meter intervals between base stations. With Terragraph, construction takes less time to deploy at a lower cost when compared to a conventional network. This is accomplished by attaching set boxes that include millimeter-wave RF modules to objects such as streetlights, that are already ubiquitous in cities. Murata’s millimeter-wave RF modules use an independently developed LTCC that realizes stable communications quality in the millimeter-wave band and features both high heat and moisture resistance.