We use cookies to provide you with a better experience. By continuing to browse the site you are agreeing to our use of cookies in accordance with our Privacy Policy.
×
Home » Multi-Beam Phased Array with Full Digital Beamforming for SATCOM and 5G

In this article, we discuss the advantages of digital beamforming (DBF) for capacity, control and flexibility. Until now, DBF was largely a concept because of the cost and complexity to implement a usable solution. We will describe a commercial ASIC implementing DBF with true time delay (TTD) that realizes its potential. DBF combined with an integrated RF front-end (RFFE) enables modular electronically-steerable multi-beam array (ESMA) antenna systems for a wide range of applications.

Mobile wireless communications systems require increasingly high data rates with virtually worldwide coverage. Because terrestrial networks do not cover the globe, high data rate services are not available in remote areas or onboard ships and aircraft. SATCOM and SATCOM-on-the-move (SOTM) are essential capabilities to achieve high capacity communications with global coverage. With large capacity wireless access requiring high spectral efficiency, array antennas have emerged as a key architecture for wireless communication systems, and MIMO antenna arrays are included in the standards for cellular and wireless local area networks. These active antenna arrays will play an equally important role in next-generation HTS communications. The development of large LEO and MEO constellations, planned by companies like OneWeb, SES and SpaceX, will require ground terminals able to track multiple satellites. Parabolic dish antennas have been the defacto design for SATCOM Earth antennas. They have advantages such as good performance, power consumption and cost, yet they are stationary and have lower efficiency. In comparison, electronically-steerable antennas have many benefits: self-installation, multi-SATCOM, satellite tracking and their payloads can be more flexible, enabling techniques such as multi-beam, beam hopping and flexible beam shaping. All-electronic control eliminates mechanical parts, which are slow and more likely to malfunction.

As Ku-Band capacity is widely available from the existing geostationary (GEO) satellite networks above the planet, market interest has largely been for satellite services at Ku-Band, namely digital TV broadcast, broadband internet access and IoT networks. The growth of these services will depend on the development of new high performance and low-cost user terminals with the ability to track satellite position while in motion. The antenna at the terminal must be capable of wide-angle scanning while keeping fabrication costs as low as possible, since most applications are consumer markets. For low-cost applications such as the IoT, the cost of the antenna can be reduced using energy efficient waveforms, such as half-duplex, which optimize link and resource utilization. The cost using such waveforms can be reduced with a single antenna that can serve both receive (Rx) and transmit (Tx).

Antennas convert RF signals into electromagnetic transmission and vice versa. Each antenna has a radiation pattern defining the direction of the energy radiated by the antenna. An antenna’s gain and directivity go hand in hand: the greater the gain, the more directive the antenna. It is this feature of the antenna that has become the focus for increasing capacity, particularly with the next-generation of wireless communications systems for both SATCOM and 5G. 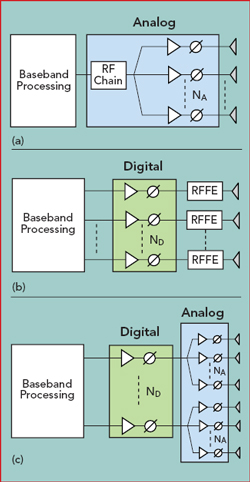 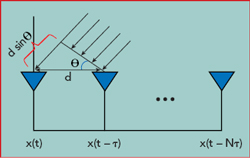 Beamformers comprise an array of antennas making the combined aperture directive. They control the radiation pattern through the constructive and destructive superposition of signals from the different antenna elements. In general, beamforming can be classified as passive and active. Passive beamformers are fixed directive antennas made of passive components, such as transmission lines, that point the beam in a fixed direction. Active beamformer antennas - commonly known as phased arrays - have active phase shifters at each antenna element to change the relative phase among the elements; because they are active, the beam can be dynamically steered. Electronically-steerable antennas can adopt one of three approaches to beamforming: analog, digital and hybrid (see Figure 1).

LO beamforming uses the LO distribution network for phase shifting, addressing the noise figure challenge by shifting the phase shifter from the signal path to the LO path. However, this increases power consumption, and the complexity scales with the size of the antenna.

With analog baseband beamforming, beamforming occurs in the baseband, after down-conversion and before up-conversion, enabling use of higher precision phase shifters. However, the size of the phase shifters and the complexity of the BFN - mixers in each RF chain and a network of baseband splitters and combiners - are challenges.

With digital beamforming (DBF), beamforming is performed digitally at baseband, requiring one beamformer and RFFE at each antenna element. Offering a high degree of control, DBF is considered the most flexible beamforming approach and superior to ABF for receiving and transmitting wideband signals and, more importantly, for multi-beam applications. The digital implementation has greater reconfigurability and enables treatment of RF impairments at each antenna element. However, it requires data converters and RFFEs for each antenna element, increasing the complexity and power consumption. Fortunately, recent advances in silicon processes have reduced the complexity, power and cost of digital beamforming, making it feasible for some phased arrays.

Figure 3 Phased array radiation patterns showing beam squint vs. frequency (a) and no beam squint with true time delay (b). 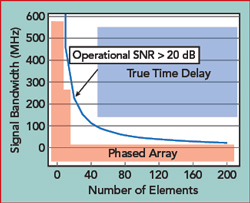 Figure 4 Maximum signal bandwidth vs. number of elements in a uniform linear array. 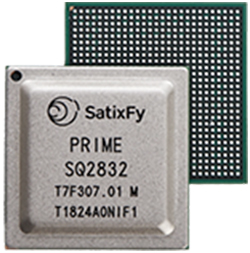 Given the ongoing improvement in silicon technology, DBF is the preferred approach for phased array antennas. It offers:

Wideband signal reception and transmission: Wider signal bandwidth improves the spectral efficiency of the system, increasing the capacity of the terminal. DBF enables ready implementation of high precision phase shifters and delay compensation (TTD), so the array can operate over a large signal bandwidth without beam squint.

Large number of beams: MIMO with multi-beam capability is the most effective way to increase channel capacity. With SATCOM, it enables simultaneous communication with multiple satellites. DBF supports large numbers of beams using the entire antenna aperture, which provides the same antenna gain and directivity for each beam.

Flexibility: Active beamforming with flexible reconfiguration enables the array to adapt for multiple applications, such as online calibration, configuring dynamic subarrays and monitoring processing and synchronization. 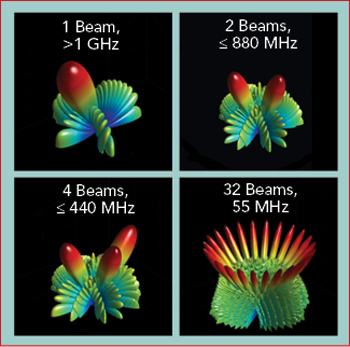 Antennas on conformal structures: The ability of DBF to calibrate and compensate for phase and delay allows decoupling the antenna’s geometry from its performance, making conformal antennas feasible, i.e., unrestricted to a 2D plane. Geometric shapes such as hemi-spheroidal 3D antennas or other conformal shapes can be implemented using DBF.