We use cookies to provide you with a better experience. By continuing to browse the site you are agreeing to our use of cookies in accordance with our Privacy Policy.
Home » Anritsu MT8821C Supports LTE Category M1 and Narrowband IoT Designs
Cellular 4G/LTE Channel European Industry News Industry News IoT/M2M/V2V Channel Software/EDA Channel Test and Measurement Channel

Anritsu Corporation has introduced multiple software packages for its MT8821C Radio Communications Analyzer that support emerging LTE Category M1 (LTE Cat-M1) and Narrowband IoT (NB-IoT) designs to create a highly efficient testing environment for LTE Cat-M1 and NB-IoT chipset and device verification. This support expands the test capability of the MT8821C, and provides IoT-terminal and chipset manufacturers as well as communications operators with an all-in-one solution that can speed development of IoT devices.

RF measurements defined in articles 6 and 7 of the 3GPP TS36.521-1 recommendations for LTE Cat-M1 and NB-IoT terminals can be made with the MT8821C with the software installed. Additionally, the eDRX and PSM low-power-consumption technologies are supported, along with IP data transferring functions necessary for comprehensive throughput measurement and function tests. 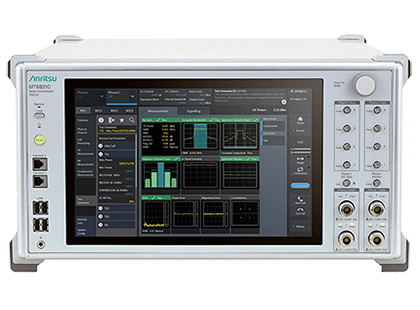 The new software options expand the measurement capability of the MT8821C all-in-one tester. With built-in RF TRx test functions and base station simulation functions for LTE-Advanced terminals, it supports tests of TRx characteristics while the terminal is communicating. With frequency coverage up to 6 GHz and 160 MHz wide frequency bandwidth for both Tx and Rx tests, the analyzer supports all cellular technologies compliant with 3GPP/3GPP2 UE RF TRX tests, including LTE/LTE-Advanced, Cat-M1/NB-IoT, W-CDMA/HSPA, GSM/EGPRS, TD-SCDMA/HSPA, and CDMA2000 1X/1xEV-DO.

Test costs are reduced and throughput improved with the MT8821C. The solution can control the mobile device by signaling and it supports measurements directly without changes due to the chipset for lower measurement environment setup costs. Through its unique Parallelphone Measurement (PPM) feature, a single MT8821C analyzer can perform simultaneous and independent testing of two UEs, reducing cost-of-test and improving throughput by 50%.