We use cookies to provide you with a better experience. By continuing to browse the site you are agreeing to our use of cookies in accordance with our Privacy Policy.
Home » Rohde & Schwarz Collaborates with Gemalto on Drive Testing for LTE-Advanced Modules
Cellular 4G/LTE Channel European Industry News Industry News Test and Measurement Channel

Rohde & Schwarz is collaborating with wireless module vendor Gemalto to overcome the problem of extensive real network drive tests in different countries. The solution is to automatically reproduce field-recorded network configurations of Gemalto Cinterion modules on an R&S CMW500 mobile radio tester. Manufacturers can use virtual drive tests during the development phase of LTE and LTE-Advanced modules that will ultimately be used in smartphones as well as in M2M and automotive applications. Network-specific integration tests and field tests include analysis of call drops, cell handover problems and roaming issues, which are especially critical when crossing country and cellular network borders.

“Rohde & Schwarz is a long time trusted partner to Gemalto, helping us rigorously test devices and networks to ensure our products deliver the highest quality our customers expect,” said Andreas Haegele, SVP IoT products, Gemalto. “The new solution reproduces conditions from field test logs in a lab environment allowing us to validate devices under real network conditions and solve potential issues while eliminating time consuming and cost intensive analysis in the field. This is particularly important as we pioneer new technologies such as LTE-M and NB-IoT, which have not been previously implemented in smartphones.” 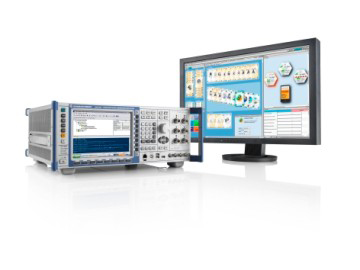 Rohde & Schwarz has developed R&S CMWcards software – a graphical protocol test tool that provides a wizard for importing field logs generated by different types of drive test tools (R&S ROMES) and chipset logging tools. After import, R&S CMWcards extract the base station and core network parameters are extracted along with RF data such as power levels. All relevant field network parameters can be used to recreate the collected drive test data in the lab, using R&S CMWcards for protocol and application tests. This is especially relevant for LTE/LTE-Advanced, WCDMA and GSM as well as cellular IoT standards such as eMTC and NB-IoT.

Accelerating the network drive test process results in faster time to market. Unlike other simulated drive test solutions, R&S CMWcards is the first virtual drive test solution to offer replication of signaling and RF conditions in an easy-to-operate GUI on the R&S CMW500 mobile radio tester.

Rohde and Schwarz collaborates with NTT DOCOMO on 5G