We use cookies to provide you with a better experience. By continuing to browse the site you are agreeing to our use of cookies in accordance with our Privacy Policy.
×
Stay Connected :
Home » A Modified Three-Level Doherty Amplifier for Next-Generation Communication Systems 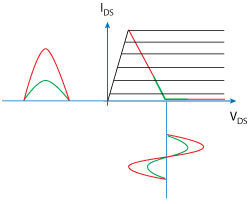 A modified three-level Doherty amplifier produces good efficiency over 10 dB of operation using devices of equal periphery. Test results are presented that demonstrate a drain efficiency of greater than 40 percent at 10 dB back-off.

Modern communication systems routinely use complex modulation techniques that result in peak-to-average ratio (PAR) signals of 9 dB and higher. To achieve sufficient linearity, these high PAR levels require a power amplifier (PA) to operate far below the power levels that would yield optimum power-added efficiency. To understand this effect, consider one of the simplest forms of an RF amplifier, the class AB type shown in Figure 1.

Such an amplifier is relatively straightforward to design and manufacture and can easily provide peak drain efficiencies of around 65 percent when operating in the 2 GHz region. One drawback with this type of simple amplifier is that when the RF output signal level is reduced, the output voltage swing decreases and efficiency drops with the square root of the output power. This means that at a quarter of the output power (-6 dB), efficiency is about half of what it is at peak output power, or 32 percent in this example. Clearly, operating at 6 dB back-off and higher with a class AB amplifier results in a significant reduction in efficiency, because the signal is, on average, sitting at a highly inefficient operating point.

The two-way Doherty amplifier provides an improvement over class AB operation, but with higher levels of PAR being used it is necessary to improve efficiency at back-off levels of 10 dB and higher. The three-level or three-way Doherty amplifier produces peaks in efficiency at 9.5, 4.4 and 0 dB, which is a good fit for LTE transmitters. However, as will be seen later, the conventional approach requires that the two auxiliary amplifiers be twice the periphery of the main amplifier. 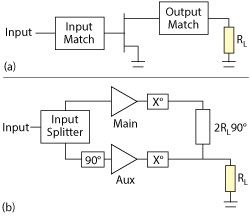 This article describes the operation of a modified three-level Doherty amplifier1 that produces good efficiency over the top 10 dB of operation using devices of equal periphery. Its operation is explained based on an Ampleon (formerly NXP) design that uses three laterally diffused metal oxide semiconductor (LDMOS) transistors of equal size. Design challenges faced with this type of amplifier are presented and compared against the conventional three-way Doherty architecture. Test results are presented that demonstrate a drain efficiency of greater than 40 percent at 10 dB back-off.

The entire RF design, including layout, is implemented in the NI AWR Design Environment. Within this software environment, Microwave Office circuit design software and APLAC harmonic balance are used to simulate, in detail, the large-signal effects of the Doherty amplifier’s operation. The software’s load-pull analysis is used to determine the impact of load impedance on amplifier performance.

Although well documented in the literature, it is worth taking a moment to revisit the simple case of the two-way Doherty amplifier to fully understand the three-level configuration. The standard two-way Doherty amplifier works by splitting the amplifier into two equally-sized amplifiers that are half the size of a single-ended class AB amplifier with the same peak power capability (see Figure 2). The basic principle is that when the output signal level is low, only the main amplifier is active. With increasing output levels, the auxiliary amplifier is progressively introduced up to the point where full power is achieved, and both the main and auxiliary amplifiers contribute equally to deliver full power. 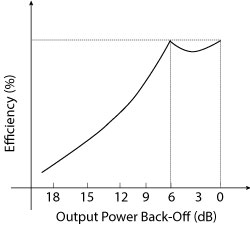 As shown in Figure 6, the conventional three-level Doherty amplifier is a direct extension of the two-way design. By adjusting the relative device periphery between the main and auxiliary amplifiers, it is possible to achieve a variety of different positions for the efficiency peaks. The designer can use the equations defined by Edmund, et al.3 to locate the efficiency peaks as required. This article is concerned with signals around 10 dB of PAR. The relative levels of device periphery to achieve an efficiency peak at ‐9.5, ‐4.4 and 0 dB for the conventional three-level Doherty is 1:2:2, where the first digit is the main amplifier followed by Aux 1 and Aux 2.

For this configuration, Z01 is required to be 70.7 Ω, Z02 = 33.3 Ω and RL = 20 Ω. At the first efficiency peak, the main amplifier sees an impedance of 90 Ω. In order to match the output to 50 Ω, an impedance inverter with a value of √(20*50)=31.6 Ω is required. In essence, the conventional three-level Doherty amplifier behaves as a two-way Doherty amplifier up to the second peak (‐4.4 dB) in efficiency; then, from the second peak to full power, the main and auxiliary 1 amplifiers behave like a main amplifier that is load modulated by the current contribution from auxiliary 2. There are two main drawbacks to the conventional three-level Doherty amplifier. The first is that different device sizes are required to provide efficiency peaks in the 10 dB back-off region, which leads to added complexity. The second is that the load modulation of the main amplifier stops between the second and final efficiency peaks. This means that the main amplifier is driven into extreme saturation over the last 6 dB of output power.1

The modified three-level Doherty design1 achieves similar performance to a conventional three-level Doherty amplifier without having to accommodate output transistors of different sizes. Using transistors of equal size for the main and auxiliary stages has a number of practical benefits, including the use of a single “unit cell” RF design. The basic amplifier unit cell for the main and auxiliaries can be of the same (or very similar) design, which reduces development time. Also, having three of the same part rather than two different parts on the bill of materials results in economies of scale, which is important for what are likely to be the most expensive components in the amplifier. The configuration also provides proper load modulation of the main amplifier, whose load impedance is steadily reduced with increasing drive level. A schematic of the modified three-level Doherty is shown in Figure 7. The best way to understand the operation is to start at low signal levels, progressively increasing the input drive and discussing the operation at each efficiency peak (see Figure 8). Each unit cell in this example delivers maximum output power when driving a 50 Ω load. The unit cell also contains phase offset lines to ensure that the electrical length of an auxiliary (and main) stage is 180 degrees from the active device at the point where the amplifier is connected into the Doherty combiner circuit. This ensures that when the auxiliary amplifier is switched off, an open circuit is presented to the Doherty combiner and minimum power is dissipated in the auxiliary output matching circuits. The main amplifier is biased in a class AB mode, auxiliary 1 is biased at about 0.7 V, and auxiliary 2 is biased at about 0 V when using enhancement mode LDMOS transistors. These values provide the required progressive switching of the auxiliary amplifiers. Note that the load is 16.7 Ω in this example and transformed up to 50 Ω with a 28.8 Ω quarter-wave inverter.

This condition is point B in Figure 8 and is the second efficiency peak. Applying Equation 1, the impedance seen from the main amplifier looking into node A is given by:

Bias of the auxiliary 2 amplifier is set such that it starts to turn on and deliver current into the output load when Equation 2 is satisfied. The increase in current further reduces the main impedance and allows it to deliver more power. The increased current into the load also reduces the load impedance seen by the auxiliary 1 amplifier, so this device delivers more power and further increases load current. This increase in current continues until the contribution from each amplifier is equal and the following is satisfied:

The two auxiliary amplifiers deliver a total normalized current of 2 into the load and the main amplifier delivers 1. This is point C in Figure 8. At this point, the impedance from the main branch looking into node A is now

The main amplifier sees 50 Ω and delivers full power. The impedance seen from the auxiliary branch looking into node A is given by:

Since Z03 is a 25 Ω inverter, the impedance looking into node B is also 25 Ω. This is the correct impedance for two 50 Ω loads in parallel. The parameters for the amplifier at this third and final efficiency peak (0 dB back-off) are given in Table 3. 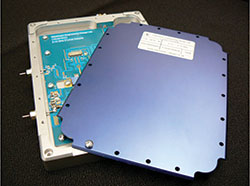 In addition to the design of the output network, there are a number of practical design considerations for this type of amplifier that should be considered. The first is that the gain of the three-level amplifier is inherently quite low because of the three-way input split. This results in the small-signal gain being a minimum of 4.7 dB lower than that obtained from a single-ended device. This is less of an issue at lower cellular bands but can become a problem at higher frequencies, where gain is at a premium. The quarter-wave transformers used extensively throughout this design limit the bandwidth to about four to five percent maximum, so this approach is only applicable for narrowband applications.

To demonstrate the concept, a 2.14 GHz version of the Ampleon three-level amplifier was designed and manufactured by Slipstream Engineering Design. A photograph of the amplifier is shown in Figure 9. The three-way input split (‐4.7 dB) is achieved by using a 5 dB directional coupler cascaded with a 3 dB hybrid coupler. The transistors used are twin LDMOS devices running at 28 V bias (normally used for push/pull or balanced applications) with one of the transistors unused in the upper device. Results are presented as back-off levels from the full output power of 150 W, which in this case is defined as about 2 dB output compression (see Figure 10). As can be seen, the design objective of 40 percent drain efficiency at 10 dB back-off is achieved over the band of interest. The small-signal gain of this amplifier is about 16 dB, with a power gain at full power of 14 dB.

This article presented an overview and explanation of the operating principles for a modified Ampleon three-level Doherty amplifier3 that produces good efficiency over the top 10 dB of operation using devices of equal periphery. Design challenges faced with this type of amplifier were discussed and compared with those of a conventional three-way Doherty architecture. Experimental results demonstrate a drain efficiency of greater than 40 percent at 10 dB back-off.