We use cookies to provide you with a better experience. By continuing to browse the site you are agreeing to our use of cookies in accordance with our Privacy Policy.
×
Home » 18 to 40 GHz Transceiver 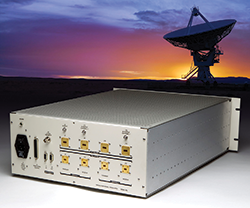 Spacek Labs has developed an 18 to 40 GHz transceiver, the TRRKKa-9HVA, comprising one transmit and two receive channels. Each of the two down-converting receive channels comprise a 70 dB programmable attenuator, low noise amplifier (LNA), switch for selecting 18 to 26.5 GHz or 26.5 to 40 GHz, an RF lowpass filter (for image and LO rejection) and mixer. The programmable attenuators have 2 dB minimum insertion loss, and the LNAs have 4.5 dB noise figure with 20 dB gain, typical. The mixers in the down-converters use a balanced crossbar design and achieve a conversion loss of approximately 7 dB.

The transmit channel contains an up-converting mixer, RF lowpass filter, power amplifier, band switch, polarity switch (vertical and horizontal) and an antenna switch at the output. The up-converting mixer is also a balanced crossbar design with 7 dB conversion loss. The lowpass filter following the mixer rejects the LO and image frequencies, the image by more than 50 dB. The output amplifier has approximately 45 dB gain with an output power at 1 dB compression of greater than +28 dBm, typical, from 18 to 40 GHz.

The LO chain comprises a fundamental phase-locked oscillator (PLO) with a 10 MHz external reference. The PLO is switched between the x3 and x4 active multipliers, both with output bandpass filters. The x3 output drives the three K-Band mixers, and the x4 output drives the three Ka-Band mixers. Filtering keeps the upper and lower sidebands of the RF signal from entering the LO chain yielding a channel isolation of greater than 60 dB.