We use cookies to provide you with a better experience. By continuing to browse the site you are agreeing to our use of cookies in accordance with our Privacy Policy.
Home » Expanding Mobile Capacity: The Evolution to LTE-U and LAA
6G/5G/Massive MIMO Channel

Expanding Mobile Capacity: The Evolution to LTE-U and LAA

As mobile operators seek additional spectrum to handle the exponential growth in data traffic, the unlicensed 5 GHz bands offer additional spectrum to increase system capacity at literally no cost. Standards development to share the spectrum is well underway, known in the industry as LTE-U and LAA. This article explores the basic principles behind LTE-U and LAA, the approach to ensure coexistence and fair sharing, and implementation challenges.

Due to the ongoing transition from voice-centric mobile phones to smartphones and tablets – greatly accelerated by the launch of LTE networks beginning in 2009 – mobile broadband data consumption has increased exponentially over the past five years. Global mobile data traffic grew 69 percent in 2014 alone and reached 2.5 exabytes per month, up from 1.5 exabytes per month in 2013. Additional growth of 59 percent is forecast for 2015, reaching 4.2 exabytes per month. Video streaming is the dominant traffic type and accounted for more than 55 percent of all mobile data traffic in 2014. Such ongoing exponential growth represents quite a challenge for mobile network operators worldwide.

Service providers must efficiently use the spectrum available to them to deliver an excellent user experience while offering high data rates on an average basis to every subscriber. LTE is the technology of choice; however, spectrum is not an infinite resource. Over recent years, service providers have invested billions of dollars on a global scale to increase their spectrum holdings and, thus, their system capacity. However, only a limited amount of frequencies are available that local regulators can auction off to service providers, leading to tough competition as well as bidding wars in extreme cases to acquire additional licenses.

Due to this shortage, alternatives are required. One very promising alternative is to take advantage of unlicensed spectrum, such as the industrial, scientific and medical (ISM) frequency bands – especially the underutilized 5 GHz frequency band. Opportunistic usage of the spectrum, while deploying LTE component carriers in this frequency band, allows network operators to increase their system capacity while adding additional spectrum resources at literally no cost. This alternative is known across the industry as LTE in unlicensed spectrum, or LTE-U. This approach has gained significant momentum, especially in the United States.

Accordingly, the 3GPP, the standardization body behind LTE, took up the challenge of enhancing the technology while adding the required functionality to support LTE-U. The feature is currently being standardized as licensed assisted access (LAA) using LTE. It will be added with Release 13, which should be finalized in March 2016. Of course, there is no free lunch, and everything has its price. Coexistence and fair sharing of the spectrum resource among LTE-U operators and, more importantly, with existing technologies such as Wi-Fi are important prerequisites to the success of LTE-U/LAA.

The 5 GHz spectrum is regulated in a similar manner throughout the world, but additional rules do apply in the different regions. Frequency regulation from a global perspective is administered by the International Telecommunication Union (ITU) on a regional basis. There are three regions defined. ITU Region 1 is primarily Europe; ITU Region 2 is America, including the United States, Canada and Brazil, for example; and ITU Region 3 is Asia with China, Japan and South Korea. Countries belonging to any of these regions typically adhere to the overall concept for that region; however, there can be additional regulations in place locally that apply to certain parts of the spectrum. The regulatory aspects for the 5 GHz spectrum in the U.S. are considered in this article, since there is a very strong interest in LTE-U and LAA that is driven by local tier one operators. 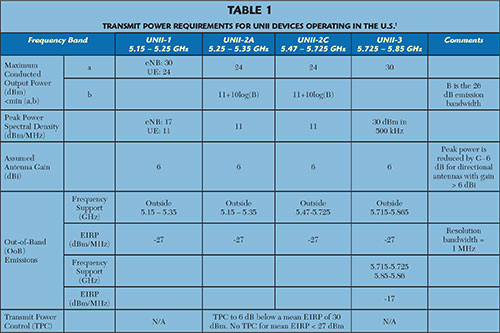 Figure 1 shows the spectrum allocation in the U.S. The spectrum between 5150 and 5925 MHz is divided into four domains that are designated UNII-1 to UNII-4, where UNII stands for unlicensed national information infrastructure. For the four domains, different regulatory rules apply, for example, the allowed maximum conducted output power, the peak power spectral density (PSD) and out-of-band (OoB) emissions. Table 1 shows the requirements set by the Federal Communications Commission (FCC), the regulatory authority in the U.S.1

As can be gathered from Table 1, UNII-2 devices need to support transmit power control (TPC) as well as dynamic frequency selection (DFS); (see Figure 1). In contrast, UNII-1 and UNII-3 do not require this additional mechanism to ensure coexistence with other systems, thereby making the lower and upper portion of the spectrum the first targeted frequencies that will be used by LTE-U and LAA. Consequently, two new frequency bands were defined by the 3GPP as Band 252 and Band 255, which correspond to UNII-1 and UNII-3, respectively. Note that the channel raster definition for these two bands follows the Wi-Fi channel assignment to avoid in-channel interference.

With the band definition, the 3GPP is acknowledging the initial work that has been done within an industry alliance, called the LTE-U Forum, which was forged to accelerate the time to market for LTE-U. The founding members of the LTE-U Forum were Verizon Wireless, Qualcomm, Ericsson, Alcatel-Lucent and Samsung. These key players in the wireless industry have agreed on coexistence aspects to allow fair sharing of the spectrum resource with other LTE-U operators and technologies such as Wi-Fi. Furthermore, they agreed on a set of specifications to define the minimum requirements for handsets and base stations supporting LTE-U. 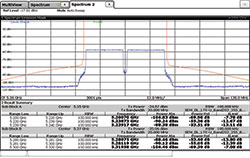 For example, the minimum requirements for an eNB (LTE base station) are based on the 3GPP’s technical specification (TS) 36.104. This document takes the limits and tolerances that are provided within TS 36.104 for RF measurements, such as adjacent channel leakage power ratio (ACLR) or spectrum emission mask (SEM), and adapts them for base stations that support LTE-U in terms of the regulatory aspects. Figure 2 shows an adapted spectrum emission mask (SEM) measurement on an LTE-U capable base station operating in frequency band 255 (UNII-3). The measurement is in line with the LTE-U eNB minimum requirements specification.2

To distinguish the work done by the LTE-U Forum from that of the 3GPP, from a forum perspective, LTE-U is defined to use bands 252 and 255 as a supplemental downlink only. The LAA work item also defines the anchor carrier or primary component carrier (PCC) for the communications link to reside in a licensed frequency band but does not exclude the use of the 5 GHz spectrum for uplink carrier aggregation at a later stage. For the moment, the 3GPP is also considering the (secondary) component carrier placed in the 5 GHz bands solely as a transmission resource.3

The LTE-U Forum members have agreed on a two-step approach to ensure coexistence with other technologies and LTE-U operators, along with fair sharing of the spectrum resource with existing technologies. First, this is based on smart channel selection during the initial boot-up phase, which is then continued dynamically during operation. In other words, an LTE-U capable base station (similar to a Wi-Fi access point) periodically monitors the frequency band and selects its channel based on channel quality measurements and input parameters such as traffic load. A ‘channel penalty’ function has been proposed that has multiple input parameters with variable weighting factors. Based on the measurements and weighting factors, a penalty for each potential channel is determined. The channel with the lowest penalty is selected and a 20 MHz LTE component carrier is transmitted on this frequency channel. A terminal that supports LTE-U is informed about the exact carrier frequency via the defined signaling methods for carrier aggregation and can thus access that component carrier.

As of now, aggregation of up to three component carriers is foreseen. One is in a licensed frequency band that could have any bandwidth depending on the spectrum of the respective operator. In addition, there can be up to two 20 MHz component carriers in the unlicensed frequency band. Such carriers are always 20 MHz wide – no more and no less due to the Wi-Fi channel definition, where the minimum bandwidth is 20 MHz. In total, there could be an aggregated transmission bandwidth of up to 60 MHz, including 2×2 MIMO operation per component carrier, and a maximum peak data rate of 450 Mbps.

Figure 3 LTE-U base stations use CSAT to ensure fair spectrum sharing with other LTE-U operators and Wi-Fi.

After initial channel selection, the LTE-U capable base station must use carrier sensitive adaptive transmission (CSAT) to ensure fair sharing with other LTE-U operators using the spectrum and Wi-Fi. The basic principle behind CSAT is to define a cycle with a duration of some milliseconds that is divided into an “on” period and an “off” period. The length of the cycle and thus the duration of the on and off periods are dynamically adaptable based on the traffic situation (see Figure 3). If there is a heavy load on the selected channel, when  many Wi-Fi access points and other LTE-U base stations are active, then the CSAT cycle might be long, up to 150 ms, and the on period short, for example only 20 ms. If the channel is not heavily occupied, a shorter CSAT cycle might be appropriate with a longer on period and therefore a shorter off period. Note that the values shown in Figure 3 were suggestions by LTE-U Forum members, presented at a workshop in May 2015.

During the on period of the CSAT cycle, a few subframes are periodically punctured and configured as almost blank subframes (ABS). The actual quantity depends on the duration of the on period and, thus, on the traffic load. The puncturing of subframes is intended to ensure that latency-sensitive applications that run over Wi-Fi, such as voice over Wi-Fi (VoWi-Fi), can still function once LTE-U is operational.

Besides testing the RF conformance of LTE-U capable base stations by measuring the transmission power, SEM and ACLR, it is important to test handset performance and coexistence. To demonstrate LTE-U performance, a setup that was featured at Mobile World Congress 2015 was used to emulate and aggregate three LTE component carriers with a bandwidth of 20 MHz each and 2×2 MIMO. Two of the component carriers were placed in a licensed frequency band, and the other component carrier was placed in the UNII-3 domain of the 5 GHz spectrum. Aggregating these three carriers achieved a maximum data rate of 450 Mbps. The demonstration involved a maximum throughput test to verify that the device under test was capable of handling this high data rate.4 To ensure coexistence, it was also important to verify that the device was able to support CSAT.

The 3GPP is standardizing LTE-U functionality known as LAA. Part of the standardization involves integrating listen before talk (LBT) functionality, which is required in Europe and Japan to use the 5 GHz spectrum. A device that wants to utilize the spectrum must always sense the channel first before starting to transmit. At this time, the standardized LBT functionality is based solely on energy detection.

LTE-U is currently a hot topic in the wireless industry. The feature provides an attractive alternative for network operators who want additional spectrum to increase their system capacity. Fair sharing of the resource among operators and existing technologies such as Wi-Fi is key to the success of LTE-U.

5G Evolution – On the Path to 6G: Expanding the Frontiers of Wireless Communications