We use cookies to provide you with a better experience. By continuing to browse the site you are agreeing to our use of cookies in accordance with our Privacy Policy.
×
Stay Connected :
Home » Analyst V11 Offers User-Customizable Library

AnalystTM, AWR’s full 3D electromagnetic (EM) finite element method (FEM) simulator, offers a user-customizable library of parts as well as new antenna capabilities in its second major release that’s encompassed within the V11 release of the AWR Design EnvironmentTM. In particular, 3D PCells (parameterized cells) are the backbone for bringing user-customizable library parts to the engineering desktop. PCells have been added, making it easy for designers to develop and use fully customizable parts, which, once created, can be deployed multiple times across multiple users thereby ensuring maximum flexibility, engineering productivity and reuse.

As well as configurable PCells, the V11 release of Analyst has a number of new additions that aid in antenna analysis, including field patterns and standard measurements of interest to the antenna engineer. Other improvements include a connectivity viewer, additional example design projects, and more than a dozen pre-configured 3D PCells for structures ranging from gull-wing packages to capacitors, coaxial cables and air coils. (Note: The key features introduced in the first version of Analyst (AWR Design Environment V10.x) are detailed in a December 2013 Microwave Journal article.

The idea for Analyst sprang from the design community’s need for 3D EM simulation to be completely integrated within a circuit simulation environment. This alleviates the nuances associated with the manual interaction and cumbersome duplication of efforts associated with disparate EM point tools being manipulated to fit within a circuit design flow/framework. In the V10 release, Analyst was introduced into Microwave Office®, AWR’s circuit design software. The designer could create designs using the already-available 2D-extrusion editor and include pre-defined PCells for the most common of 3D interconnect like bond wires, BGA balls, tapered vias and grounding straps. In addition, finite extent dielectrics and holes and voids in dielectric layers could be created. The focus was on making Analyst as transparent as possible for microwave engineers to use in the design of circuits ranging from MMICs to MICs RF PCBs and microwave modules. In fact, any designer already familiar with AWR’s AXIEM® 3D planar EM solver could immediately access and use Analyst and readily grow more proficient after grasping the addition of expanded boundary condition options and port settings.

While the first release of Analyst addressed the user community’s most common request for a seamless EM-circuit design flow that accounted for common arbitrary 3D structures, the request for additional shapes and flexibility for users to readily customize their own parts library brought forth V11 Analyst. V11 addresses the need for the occasional inclusion of 3D shapes that are not in the available set of preconfigured PCells and cannot be constructed through the existing 2D-extrusion drawing environment.

Figure 1 Layout with SMA and coil PCells (a) and 3D view showing ports on SMA connectors (b). 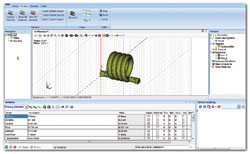 For example, an SMA connector was not available in V10 whereas in V11, the new user-defined library of parts (3D PCell feature) solves this problem. A designer can now open a 3D layout editor and draw the SMA connector as desired. Since the 3D editor is coupled to the Microwave Office environment, all units and electromagnetic environment and material properties remain consistent. A key feature of the editor is the ability to use parameters to develop the drawing. These parameters can be exported to Microwave Office. Since the user of the PCell can change the parameters, the resultant cell can be reused in a wide variety of cases. For example, with about 15 parameters, the SMA connector can be modified to represent a wide variety of available connector types. Examples follow.

The new 3D PCells are created in Analyst’s new 3D drawing editor, which augments the already existing 2D layout environment in the AWR Design Environment’s Microwave Office circuit design software. Parameters can be used to control the drawing of the part. Once created, designers can simply use the part in Microwave Office, changing the shape by varying the parameters as necessary.  A “create once, use often” library of cells is thereby created and configured for the designer’s specific needs.

Figure 3 3D view showing a round center pin (a) and a tabbed transition on center tab (b).

Analyst comes with a variety of common RF/microwave parts already created, including connectors, coils and transmission lines. These parts are sufficient to fulfill most designer needs, however, if a new user-customized cell is needed,  creating the part in the Analyst 3D editor is straightforward. The editor is closely tied to the standard Microwave Office layout environment, with the units and various electromagnetic material library properties and the technology stack up being shared as needed. In addition, 3D layouts can also be imported into Analyst by using the industry-standard ACIS (.sat) layout file format, which is supported by virtually all 3D CAD programs and/or other translators to additional 3D CAD files like IGES.

Figure 1 shows two examples of 3D PCells in action. An SMA cell is used four times to draw the SMA connectors at the edge of the board. A coil 3D PCell is used twice to show two air coils in the middle of the board. These cells were created in the V11 3D layout editor, placed into a user-defined library, and then called by the designer as needed. Figure 1a shows the 2D layout in Microwave Office. Note that there is a 2D outline of the cells, so that the designer can easily place them as needed. The lines and ground floods have been drawn in the standard manner. The 3D image in Figure 1b shows the completed board, four connectors and two air coils.

The 3D editor is shown in Figure 2 for the example of the air coil used in Figure 1. The editor is opened from within Microwave Office, ensuring that material parameters and units are shared between the 3D editor and the 2D drawing environment. Figure 2 shows that the 3D editor contains the standard features expected in an industry-standard 3D CAD drawing tool. The coil is shown in the drawing area. Shapes are created through the usual choice of starting with generic 3D shapes, and then modifying them by changing their parameters. Standard Boolean operations and transformations are supported.

The right side of Figure 2 shows the material properties menu, where the various electromagnetic properties of the shapes making up the coil are set. The lower left window shows various parameters used in making the coil. Normally, parameters are used as a way of making the cell customizable. A designer using the cell in Microwave Office can change the parameter values without having to go into the 3D editor.  The advantage of exposing parameters to Microwave Office is that most designers never need to use the 3D editor. For example, a designer using the coil cell shown in Figure 2 can quickly change the number of turns by changing one parameter value in Microwave Office. A well-created, user-customizable part (PCell) can therefore lead to tremendous reuse.

Another example of the versatility of parameters and 3D PCells is shown in Figure 3. The designer can change the shape of the center pin of an SMA connector by setting one parameter. This was accomplished by equations in the 3D editor, which use the values of the parameters as input. If desired, the creator of the cell can even automate the creation operations using a built-in Python scripting capability.

Finally, it is possible to import 3D layout files into the 3D editor using the standard ACIS layout language format. It is therefore also possible to reuse layouts created in other 3D EM simulation or mechanical drawing tools.

In addition to the user-customizable library of parts, V11 has a number of new features to help the antenna engineer. Figure 4 shows a simple pyramidal, microwave horn, designed to operate at 10 GHz.

Figure 4a shows the horn in the 3D editor. Special absorbing boundary conditions are used at the simulation boundaries to approximate infinite space. Figure 4b shows a typical radiation pattern that can be shown in Microwave Office. This one is the total radiated power at a phi of 0 degrees, sweeping over theta, the vertical angle. Figure 4c is a 3D representation of the E theta radiation pattern. Other typical measurements are available, including directivity and gain. 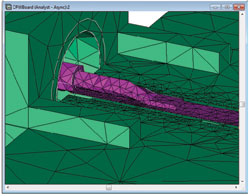 As another aid to visualization,  Analyst now has a built-in DC connectivity checker to ensure that the circuit is connected properly. An example is shown in Figure 5.  The inner conductor of the coaxial line is a different color than the outer conductor. The designer can clearly see that the two are not electrically connected, which is what is intended. By using the connectivity view checker, designers can avoid costly layout mistakes, resulting in simulation errors and lost time.

With AWR’s new Analyst V11 release, designers can simulate arbitrary 3D structures from within the Microwave Office environment. Using a combination of user-defined PCells and preconfigured shapes, the microwave designer has the power of 3D EM simulation without the distraction of having to work in an external tool disconnected from the main circuit simulation environment. Drawing time is reduced and possible set-up errors are eliminated. Powerful simulation concepts like parameter sweeping and model optimization are now easily accessed in AWR’s fully integrated environment.

View a video demonstration of this product as presented at the European Microwave Week MicroApps, October 2013 in Nuremberg.