We use cookies to provide you with a better experience. By continuing to browse the site you are agreeing to our use of cookies in accordance with our Privacy Policy.
Home » Blogs » Ken Conklin » Autonomously Speaking

Ken Conklin is a business development consultant who works with small to mid-sized technology companies and design teams, helping them secure R&D funding from U.S. Government SBIR programs, grants and industry sources. Ken also prepares strategic and tactical go-to-market plans for clients, including establishing sales channels. Previously, Ken was the general manager of the Cobham GaAs products operation. Prior to joining Cobham in 2005 (then M/A-COM), he held business development and product marketing positions with Hughes, IBM, and RFMD. During his career, Ken has introduced RF, microwave and millimeter-wave devices and components for AESA, GPS and terrestrial/space system communication applications. He is a frequent guest columnist to the Roanoke Times, contributing “slice of life” commentaries. 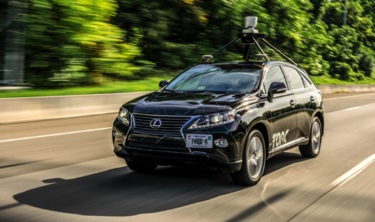 A December 9 Roanoke Times article by Jacob Demmitt — Look mom, no hands: My 20 minutes in Torc’s self-driving car — and several other recent reports regarding autonomous vehicles have served to spark my imagination on what it might be like to own one.

This perspective is coming from a guy who used to cruise the Sunset Strip in his friend’s 1964 Pontiac GTO convertible equipped with three deuces (three two-barrel carburetors) along with a “four on the floor” stick shift. Inevitably, The Rolling Stones were blasting the tunes “Spider and the Fly” and “Under My Thumb” from the 8-track tape deck. We knew we were cool, although clearly unenlightened at that point in our young lives.

But let’s say it is now 2023 and my wife discovers Chevrolet is promoting a flash sale on their brand new self-driving NaNamus. After discussing it, I direct my voice toward my Echo speaker and say, “Alexa, I would like to buy a brand new Chevrolet NaNamus.”

Alexa, in a sultry voice, responds, “Good choice. They are available on Amazon Prime for next-day delivery to your home. Based on your past purchases, we believe black should be the color of your NaNamus. Okay?”

“Yes,” I say, impressed Alexa knows this much about us.

The next day, my Echo speakers honk, followed by an automated, robotic voice saying, “I’m here in your driveway, where should I park myself?”

I open the garage and our new shiny black NaNamus automatically moves itself in, honks happily and blinks its lights in greeting.

For the first several days, we take NaNa, which is what we have taken to calling her, around the neighborhood, just to make sure we know and understand each other. Then, one evening, I notice that the Deschutes Brewery (which is finally open) is hosting a Fresh IPA party. My wife, whose favorite beer is Amstel Light over ice, encourages me to go alone to the event, knowing NaNa will be my designated driver.

I get into the drivers seat and press my thumb onto a button on the console. The lights come on and NaNa, recognizing it’s me, says, “Good evening Ken. Where would you like to go?”

“I would like to go to the Deschutes Brewery. Do you know where that is?”

NaNa chuckles and says, “Do I know where that is? Of course I do! I bet you want to go to the Fresh IPA party there tonight.”

I nod my head affirmatively. Apparently, NaNa senses my positive response, because she says, “With current traffic conditions, you will arrive at Deschutes Brewery in 34 minutes and 18.4 seconds.”

So, off we go. As we move onto I-81, I am listening to The Rolling Stones’ new album, “Condolences for the Senile.” Mick Jagger still sounds like he did during my cruising days.

But, NaNa interrupts him by saying, “I’ve got an idea.”

“Dick’s has that sand wedge on sale you’ve been looking at. It’s twenty percent off. We could swing by and pick one up. It’s guaranteed, if used properly, to get you out of those pesky sand traps.”

“Maybe when we return, NaNa. I am looking forward to that beer right now.”

A sad emoji face appears on the console, as she says, “Oh Ken, Dick’s will likely be closed by then, and the sale will be over.”

We come annoyingly close to a truck as we moved over to the left lane for the exit onto 581.

“That move would of scared the heck out of my wife, had she been with us, NaNa.”

I agreed, nodding my head.

NaNa then says, “Ken, I have to apologize, because we need to pull off to the side of the road. I need to download AutoCar 2.3767A.32 to fix a few bugs, adding five minutes and 42 seconds to our travel time. The Terms are displayed on the console, do you accept them?”

Another sad face appears on the console, as NaNa says, “We will just have to sit here then.”

“What if you update yourself while I am at Dick’s getting my new sand wedge?”

A smiley face appears on the console, followed by a thumbs up we zoom off toward Valley View Mall.

As we do, I hear Mick Jagger singing, “My, my, like the spider to the fly, jump right ahead in my web.”

This column was first published in The Roanoke Times on February 24, 2018. Photo from Torc website.

Judy - Thanks for the positive comments. I...