We use cookies to provide you with a better experience. By continuing to browse the site you are agreeing to our use of cookies in accordance with our Privacy Policy.
Home » Blogs » Gary Lerude, MWJ Technical Editor » Wolfspeed’s Growth Hampered by 5G Push Out and EV Softness

Wolfspeed’s Growth Hampered by 5G Push Out and EV Softness

Wolfspeed’s most recent quarterly revenue was flat year-over-year (Y/Y) and down 5 percent from the prior quarter, which parent Cree attributed to soft demand in China for electric vehicles (EV) and a push out of 5G, triggered by the U.S. banning exports to Huawei.

Although Wolfspeed has applied for licenses to resume shipping to Huawei, the Bureau of Industry and Security, the government agency reviewing license applications, has not responded, according to Neill Reynolds, Cree’s chief financial officer.

“We're not shipping to Huawei right now,” he said, during the company’s earnings call last week.

Gregg Lowe, Cree’s CEO, said Huawei has been the most aggressive of the network equipment manufacturers using GaN for the power amplifiers in base station radios.

“Best we understand it, they haven't done a non-GaN type new development in a number of years. So they've been really leaning forward on that. And other base station manufacturers are developing products with GaN, but it was just a slower pace.”

With Huawei’s component supplies curtailed, some expected Ericsson and Nokia to fill the gap in China. Lowe said that did not happen, which has slowed the 5G ramp.

“A lot of folks were anticipating picking up a lot of business from them and that doesn't seem to have happened,” he said.

During the earnings call, David O’Connor, an analyst with Exane BNP Paribas, asked about the possibility that Huawei will find non-U.S. sources for GaN transistors and U.S. suppliers will lose the business. Lowe acknowledged the risk, saying U.S. semiconductor companies must be more competitive to retain the business. His comments underscore the challenge now facing U.S. suppliers, given the lack of trust between the two countries.

Cree released its financial performance for the first quarter of fiscal 2020 on October 30. Wolfspeed, one of Cree’s two business segments, generated revenue of $127.7 million, with gross margin of 46.2 percent, down 390 basis points from the prior quarter. 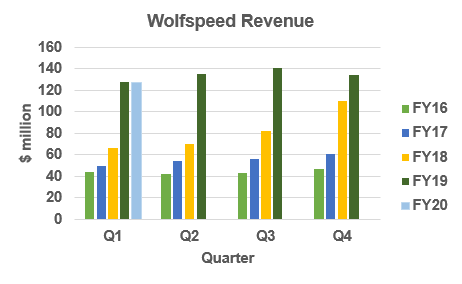 Wolfspeed contributed 53 percent of Cree’s revenue for the quarter, the remainder from the LED products segment. Cree’s Q1 revenue was $242.8 million, down 11 percent Y/Y and 3 percent sequentially. The company posted a non-GAAP net loss of $3.6 million and associated earnings per share (EPS) of ($0.03). Nonetheless, Lowe said the revenue, margin and EPS were all at or above the company’s expectations for the quarter.

Cree expects Q2 revenue to be in a range of $234 million to $240 million, with Wolfspeed revenue declining 3 to 6 percent from Q1. Reynolds said this reflects the continuing ban on sales to Huawei, broad softness in spending for 5G network equipment and lower EV sales in China, after the Chinese government reduced subsidies for EVs.

While the long-term outlook for Cree is positive, Lowe says the outlook for the second half of the fiscal year is difficult to predict. “It's an unprecedented environment where we've got a trade conflict I think has lasted a lot longer than anyone was thinking it would last. You've got an entity list that starts with the largest supplier of base stations in the world and now different companies being added to entity list, you’ve got a lot of concern, you've got slowing growth in China, you’ve got EV subsidies changing and all that kind of stuff, so I think for the near term, it's just — it's going to be lumpy and uncertain.”