We use cookies to provide you with a better experience. By continuing to browse the site you are agreeing to our use of cookies in accordance with our Privacy Policy.
×
Home » The RF GaN Device Market: A Roller-Coaster Ride
4G/5G/Cellular

In as little as five years, analysts at Yole Développement (Yole) predict the already mighty RF GaN device market will mushroom from some $900 million to $2.4 billion (see Figure 1). Three decades of investment from defense organizations around the world has placed this high power density, high efficiency material firmly on the compound semiconductor map, with GaN devices routinely used in military radar and electronic warfare. As defense agencies look to commercial applications to pay back their billion-dollar investments, 5G/LTE telecoms applications are already providing a return on the investment. At least for now.

China’s Huawei started using GaN RF devices in its 4G LTE remote radio heads (RRH) in 2014. The telecom behemoth had decided to trade low-cost Si LDMOS for GaN’s high power density and wide bandwidth and other OEMs followed. Today, the power of GaN is being harnessed by the 5G infrastructure market. Tried-and-tested GaN on SiC technology is widely used in 5G sub-6 GHz RRH base stations and is expected to maintain its stronghold for some time.

In part due to the monumental 5G network sharing deal between operators in China, the technology is also being adopted in 5G sub-6 GHz active antenna systems (AASs). To deploy more efficient antenna types, the Chinese operators ditched cheaper LDMOS transistors for higher performing GaN on SiC devices in these sub-6 GHz AAS deployments, a decision that kick-started GaN adoption elsewhere. Today, other OEMs have realized the value that GaN can bring to 5G wireless infrastructure and are moving to six-inch GaN on SiC wafer production in a bid to reduce the technology’s high price tag.

In 2020, NXP, the Netherlands-based semiconductor manufacturer and key LDMOS player, opened a six-inch GaN on SiC facility in Arizona, signaling strong customer interest in GaN RF devices for a cost-effective price. This year, longtime GaN on SiC partners, Sumitomo Electric Device Innovations (SEDI) of Japan and U.S. semiconductor manufacturer, II-VI, opened a six-inch fab in New Jersey to churn out power transistors for 5G base stations at a more cost-competitive price. As NXP and SEDI/II-VI ramp up production, U.S. semiconductor makers Wolfspeed, Qorvo and other fabs are acting to transition to six-inch GaN on SiC production—clear signs the technology is set to capture market share from LDMOS (see Figure 2). 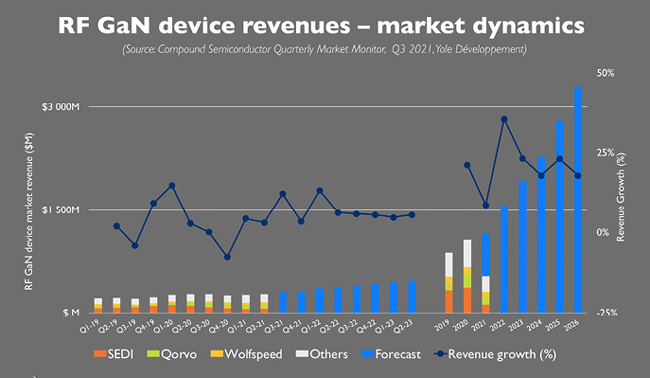 But what about the ongoing trade conflict between the U.S. and China? How is this affecting the GaN RF device market? Like the U.S., the Chinese government is determined to make the most of its GaN investments and grow commercial 5G applications. While U.S. sanctions have stymied China’s progress, the restrictions have also pushed the government to encourage development of a home-grown, internal GaN ecosystem.

At the beginning of the tensions, Huawei and ZTE stockpiled devices so they could continue to build base stations and other network infrastructure. Since, many organizations up and down the supply chain have been funneling investments into GaN. Examples include wafer manufacturers and foundries SICC and HiWafer, integrated device manufacturers (IDM) CETC and Dynax and Huawei’s own design house, HiSilicon (see Figure 3). Importantly for China, industry feedback indicates that tier one suppliers are now producing quality systems with Chinese components. Given this, the rest of the world is monitoring China’s progress very closely.

There’s more to come for GaN. In the longer term, 5G handsets could also harbor many opportunities for the GaN RF device market.

Today, GaAs is the leading power amplifier (PA) technology in smartphones, such as the iPhone 13, and will retain its dominance particularly in sub-6 GHz handsets. But industry trends are changing. The move to large bandwidth, higher power density and efficiency and greater integration, to save space in the handset’s RF front-end, mean GaN is beginning to appeal to OEMs, especially for the mmWave bands. Indeed, at least one major semiconductor player is qualifying 5G handset PAs designed with GaN for several OEMs. In the coming years, the industry may see the first adoption of a GaN PA in luxury phones that use the increasingly popular n77 to n79 C-Band, as an alternative to mmWave and the traditional sub-6 GHz cellular bands.

What might happen next? If more OEMs around the world demand GaN PAs, more foundries will fabricate the technology and the momentum will build. If GaN PAs are widely adopted for mmWave front-ends in handsets, the technology’s success is likely sealed.

Along the way, the rivalry between GaN on SiC and GaN on Si wafers will play out. With cheap, large diameter Si substrates, GaN on Si presents a bright opportunity for OEMS to develop relatively cheap GaN-based devices and systems built on the foundation of an established, scalable wafer supply. Keen to explore this opportunity, MACOM and STMicroelectronics joined forces to develop a GaN on Si platform in 2018. Infineon is also developing GaN on Si for RF applications. Earlier this year, U.S. defense giant Raytheon and Global Foundries announced a collaboration to transfer Raytheon’s GaN on CMOS process to Global Foundries for commercialization.

While these are significant industry developments and GaN on Si may deliver the cheaper PAs that high volume, cost-sensitive 5G handsets will demand, the technology does not benefit from the billion-dollar defense investments awarded to GaN on SiC. Consequently, the GaN on Si supply chain is not yet developed, and technology development spans from epitaxy to modules. Still, the pros and cons of GaN on Si and GaN on SiC are becoming clearer for the industry; for now, the technology choice depends on the OEM’s strategy and view of the trade-offs.

Satellite communication (satcom) offers another promising avenue for GaN. While destined to be a niche, low volume market, satcom has been attracting many industry players keen to apply GaN to applications such as very small aperture terminal (VSAT) satellite broadband. Here, GaN PAs from Qorvo, Wolfspeed and others have been replacing traveling wave tube amplifiers, improving reliability and lowering the system costs of transmit-receive ground stations. Myriad large-scale projects have been springing up across the U.S. and Europe, driving the development of solid-state GaN PAs for VSAT and other applications.

In the future, GaN’s radiation hardness and its high power efficiency and power density will see the technology increasingly used in satellites. Key industry players including Canada’s Norsat International, the European Space Agency and GaN device manufacturers UMS, Qorvo and OMMIC are all investigating GaN for satellites.

Space aside, the reliable defense market will be a strong supporter of GaN for many years. Billion-dollar projects from U.S. government agencies and prime contractors such as Northrop Grumman, Lockheed and Raytheon, as well as defense semiconductor suppliers Wolfspeed and Qorvo, will continue to fund technology development and insertion in programs. These efforts will require a secure and robust supply chain that will benefit the commercial telecom and other markets to follow. Similar scenarios are playing out in Asia and Europe, where organizations such as Thales, SAAB and BAE Systems are all working on GaN technologies that will also feed the commercial telecoms markets.

While the future of the GaN RF device market is bright, the level of success hinges on yet-to-be determined dynamics. For GaN on SiC, the smooth transition to six-inch wafers will be important for its near-term success. As NXP, SEDI/II-VI and other players make the transition, will the production of quality wafers proceed as planned? If not, will this dampen GaN on SiC’s adoption by 5G? Meanwhile will handset manufacturers opt for GaN on Si PAs in their 5G devices? What happens if these industry players abandon both GaN options and retain GaAs or adopt alternative technologies, such as SOI, which offer sufficient performance? What will be the impact of the deepening tensions between the U.S. and China?

Only time will reveal how the RF GaN roller-coaster ride ends. Throughout the ride, Yole Développement will scrutinize market developments, analyze the strategic questions and share our view of the likely outcomes.