We use cookies to provide you with a better experience. By continuing to browse the site you are agreeing to our use of cookies in accordance with our Privacy Policy.
×
Home » Military Satellite Terminals RF Technology Trends and Outlook
Aerospace and Defense Channel

A network can also be configured so the remote terminals bypass the hub and communicate directly with each other through the satellite. This is called two-way communication and the satellite network is in a mesh configuration. In this case, the hub only provides monitoring and control functions to the satellite.

A satellite will use an array of transponders to translate the uplink signal from the ground to a lower frequency for the downlink transmission back to the ground terminals. This frequency shifting technique reduces interference and feedback and the resulting architecture, is known as“bent pipe” architecture, that also helps reduce the cost and complexity of the satellite. Typically, the terminals, gateways and network operations center must be within the coverage of the same beam.

To meet ongoing requirements for global coverage coupled with a move towards higher bandwidth requirements has resulted in networks being operated at higher frequency underpinned by satellites that feature greater onboard functionality. Such satellites feature sophisticated on-board processors (OBP), switch matrix and phased array technology to place the routing intelligence in the satellite. This allows the ground terminals to communicate directly with one another rather than every transmission going through the network operations center. 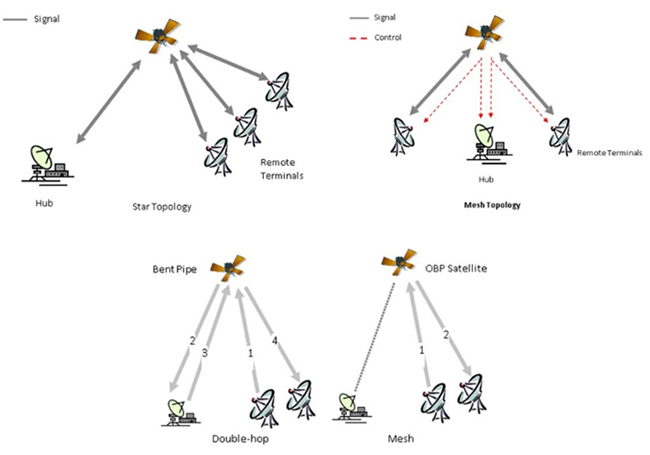 These single-hop mesh networks offer greater available channel bandwidth and more efficient modulation schemes with onboard satellite processing and electronics allowing the networks to be comprised of many smaller spot beams to target usage areas more efficiently. These spot beams link in a mesh architecture where terminals in any two beams can communicate with one another directly. This enables frequency re-use and dynamic allocation of bandwidth among beams.

The most commonly used frequencies for satellite communications can also be categorized using IEEE nomenclature.  In addition to the C-, Ku- and Ka-band frequency bands, military satellite systems also make extensive use of X-band communications frequencies. While the nomenclature “C-band”, “X-Band”, “Ku-band” and “Ka-band” are used universally, the frequency range used depends on the area of the world and end usage with the actual frequency ranges often classified to make them more difficult to disrupt. 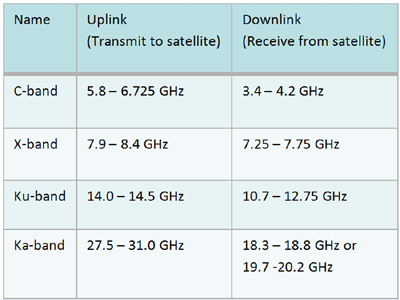 Military satellite communications have typically focused on C-band and X-band operations, but as use of satellite terminals has increased, so these bands have become increasingly capacity constrained and increasingly expensive. Bandwidth demand over the years has increased driven in part by continued growth in intelligence requirements and the expansion of UAS platform usage to incorporate BLOS (beyond line of sight) operations. This has led to the use of systems operating at higher frequencies such as Ku-band and Ka-band.

The use of Ka-band for military satellite communications in particular has received growing attention as the frequency band offers a number of benefits which include:

Furthermore, antenna gain is proportional to area and frequency, so higher operating frequencies translate to smaller antennas for the same gain enabling smaller satellite terminal equipment and pushing the concept of COTM/SOTM (communications on the move/satellite on the move) into the hands of individual soldiers. The narrower beam width of a higher frequency signal allows for more and narrower spot-beam operation which can be further enabled through the use of phased arrays.

These trends will support the continued use of military satellite communications (milsatcoms) as key enablers in completing the C4ISR jigsaw and acting as critical nodes in the net-centric communications environment. This is reflected by the broad range of terminal solutions available, targeting requirements across the land, air and naval domains.

The following graphic provides an illustrative snapshot (and is by no means exhaustive) of some of the companies that are active in supplying military satellite terminals to the defense sector.

Land-based systems can be categorized based on size and mission (strategic vs. tactical) and incorporate fixed and transportable systems, mobile/vehicular-based systems and portable and dismounted form factors.

Military satellite terminals in the naval domain span the full spectrum of platforms both surface and subsea, including aircraft carriers, destroyers, corvette, frigate platforms as well as the emerging demand from USVs (unmanned surface vehicles).

Anatomy of a Satellite Terminal

A satellite terminal can be broken down into a number of constituents, as shown by a representative breakdown of the Norsat GLOBETrekker 2.0 Flyaway Satellite Terminal. 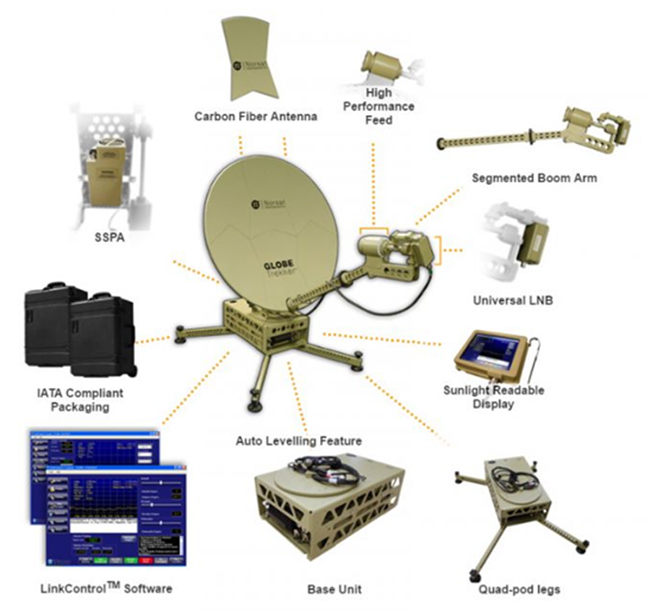 From a RF and microwave perspective there a number of core components that enable connectivity in a satellite terminal.

The above is an extreme oversimplification as demonstrated by the block diagram shown in Figure 5, which shows some of the other components that make up a satellite terminal system. 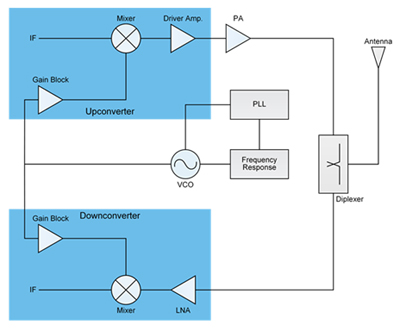 Requirements for higher data rates with a focus on IP-centric communications that encompass video and data as well as voice will push demand for military satellite terminal systems. Communicating securely faster over multiple channels and wider spectrum in an increasingly complex spectrum environment will underpin the current and future trends for system design architectures which will dictate the underlying changes in component technology demand. 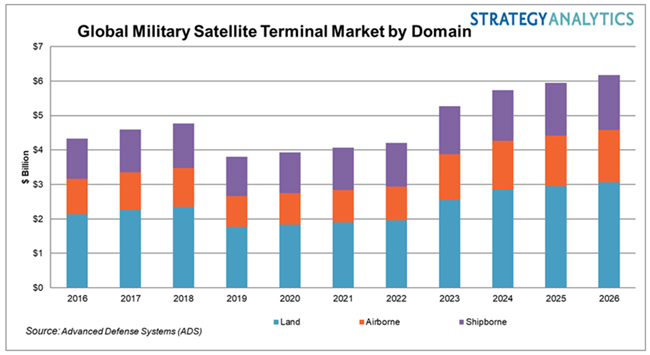 While the traditional frequencies including C-band and X-band will remain a staple component of satellite communications, bandwidth constraints and a push towards higher data rates focused on IP-centric communications that encompass video and data as well as voice will push demand for military satellite terminal systems operating at higher Ku- and Ka-bands with the subsequent market for systems operating at these frequencies forecast to grow at a CAGR of almost 5% through 2026. This will be coupled with the emergence of multi-band/wideband capable systems to enable true global roaming capabilities.

Communicating securely at faster rates over multiple channels and wider bandwidth in an increasingly complex spectrum environment will underpin the current and future trends for system design architectures which will dictate the underlying changes in component technology demand. In general, these can be distilled into four key issues that are largely in common with the other military and commercial technology sectors. These include dealing with a growing data tsunami, identifying the optimal technologies from the antenna to the baseband, bridging the energy gap to allow equipment to be SWaP-optimized and recognizing the increasing demands that will be placed on semiconductor performance as the emphasis shifts towards higher frequencies and broadband performance.

To meet these challenges, military satellite terminals will see increasing use of solid state technologies. These solutions were initially based around GaAs technology and offered potential advantages over vacuum tube based solutions in terms of cost and size with power outputs reaching 100 to 200 W. As GaN technology has matured, so SSPAs based on GaAs are being displaced by GaN solutions that can offer higher power and greater linearity enabled in smaller form factors.

The caveat is that despite solid-state semiconductor technologies such as GaN seeing increasingly robust adoption, a continued emphasis on high power, long range communications, especially in the shipborne military satellite terminal market, as efficient performance above 200 W at X-, Ku- and Ka-band frequency bands remains a differentiator for vacuum tube based RF power amplification. However, the performance attributes of GaN are now enabling solutions that offer power outputs that start to approach TWTA levels. This will mean that while existing equipment repairs and retrofits will maintain a market for vacuum tube-based components, the emphasis moving forwards will shift towards solid state solutions

The trend towards solid state solution based offerings is being reflected in the offerings from major suppliers of BUCs and SSPAs supporting the satellite terminal market.

There are numerous other companies that are actively pursuing the benefits of GaN over GaAs-based solutions including Comtech Xicom, General Dynamics and Mission Microwave and are offering solutions for the military satellite terminal market.

The primary benefits of GaN technology can be distilled down to several primary attributes:

Strategy Analytics forecasts demand for high power RF and related semiconductor components and technologies through to the digital backend from the military satellite terminal market will grow at CAGR of 1.7% from $175 million in 2016 to reach $206 million in 2026, and the increasing use of solid-state technologies will translate to the penetration of GaN technology growing by over 500% through to 2026.

Strategy Analytics forecasts spending on global military communications systems and services will grow to over $36.7 billion in 2026, representing a CAGR of 3.5%. Satellite communications will account for 37.2% of this opportunity. These trends will support the continued use of military satellite communications (milsatcoms) as key enablers in completing the C4ISR jigsaw and acting as critical nodes in the net-centric communications environment. This is reflected by the broad range of terminal solutions available, targeting requirements across the land, air and naval domains.

Communicating securely and faster over multiple channels and wider spectrum in an increasingly complex spectrum environment will underpin the current and future trends for system design architectures which will dictate the underlying changes in component technology demand. At the RF front-end, satellite terminals will take increasingly take advantage high power wideband RF technologies that can bridge the traditional gap that has existed between solid-state and vacuum tube technologies and this is encapsulated in the attributes offered by GaN technology.

Strategy Analytics forecasts the penetration of GaN technology will grow by over 500% through to 2026. This represents a growing opportunity for GaN semiconductor technology suppliers including Northrop Grumman, Qorvo, Wolfspeed, a Cree Company, UMS and Win Semiconductor. Companies that succeed in this market will need to combine the linearity, power and efficiency offered by GaN into MMIC-based solutions offered in cost effect packaging that enables the continuing requirements for smaller sized and lower weight satellite terminals.