We use cookies to provide you with a better experience. By continuing to browse the site you are agreeing to our use of cookies in accordance with our Privacy Policy.
×
Home » 5G or Wi-Fi 6 (.11ax)?
4G/5G/Cellular 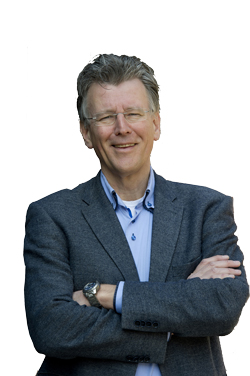 5G versus Wi-Fi (802.11ax). This is an antinomy that we hear often these days, as wireless data communication technology and standards are still in development, and new proprietary technologies are popping up every once in a while, looking for attention. How do we separate the noise from what really matters? Should consumers care about any of this?

It can be helpful to remind ourselves how we got to where we are today.

The standardization body for wireless phone communication is 3GPP. The roots of 3GPP are with the telephone operators and their governmental sponsors, since operators were originally governmental bodies-and still are in some countries. For wireless computer data communication, it is IEEE 802.11, which is rooted in the computer industry. In addition to academics and regulators, IEEE 802.11 has a large engineering membership, most of whom are sponsored by their employer companies.

The IEEE 802.11 and 3GPP have another complete and fundamental difference: The government-sponsored 3GPP works with licensed spectrum, spectrum that is acquired for a certain amount of time to provide communication services. The government, as licensor of the spectrum, is responsible for making sure that the spectrum can only be used by the licensee. On the other hand, the IEEE 802.11 standards group has developed standards in the “unlicensed” bands, bands that have been set aside by the government for “free usage” based on a set of rules, such as limited power so the interference range for realistic applications stays local. These bands are called ISM (industrial, scientific and medical) and can be found at 2, 5 and 60 GHz.

The companies that sponsored their engineers to develop IEEE 802.11 needed to enforce compliance to the IEEE 802.11 standard, as the IEEE 802.11 itself does not regulate compliance. So the Wi-Fi Alliance was founded by these interested companies for enforcing and promoting the IEEE 802.11 standard under the Wi-Fi brand. 3GPP, on the other hand, never really focused on a cohesive brand strategy aimed at consumers. This makes sense because 3GPP was the interest group of operators, who always had a certain control of the market. So instead of bothering with brand consistency, whole sets of ever-improving standards migrated from GSM/GPRS to 3G, Edge, 4G, LTE-now 5G, which will likely involve a new set of implementations.

WHY DO COMPUTERS HAVE TWO RADIOS?

When Wi-Fi was emerging in the late 1990s, the general tendency in “3GPP land” was to ask “Why do you need Wi-Fi?” At that time, the standardization of 3G was progressing well and promising high data rates, and 3G modems connected to or integrated in laptops were envisioned to provide ubiquitous connectivity. The general opinion was that this “unlicensed technology” would disappear, probably sooner than later, because the lack of oversight in the unlicensed bands would bring performance spiraling down quickly.

Of course, we know today that things turned out differently (see Figure 1). Wi-Fi has found a way to properly operate in the unlicensed ISM bands and satisfy the needs for wireless connectivity indoors, i.e., in-home or in-building, where 3G was not able to penetrate well. Also, Wi-Fi rapidly increased its data rate and expanded its capabilities by moving from the 2.4 GHz band into the 5 GHz band, and it is expected to further increase data rate by going to 60 GHz. Range extender technologies and, more recently, the concept of distributed Wi-Fi (Wi-Fi Mesh) have also supported Wi-Fi’s success. 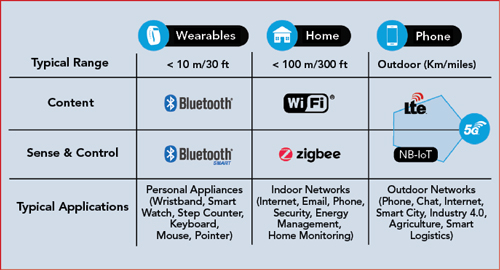 A significant part of the reason that Wi-Fi was successful was that data communications via 3G required a paid subscription from telephone operators and a data plan that initially led to quite hefty bills, not to mention roaming charges. By comparison, Wi-Fi was almost free, as the incremental cost for Wi-Fi via a fixed telephone, ISDN and, later, ADSL was limited. So now we had wired operators directly competing with the wireless operators, which ultimately stimulated worldwide acceptance of Wi-Fi. The wireless operators helped this along by initially discouraging the use of 3G for data-and therefore encouraging the use of Wi-Fi-due to concern for a voice service collapse if 3G were “overused” for data.

This answers the question of why most computers and tablets have only two radios: Wi-Fi and Bluetooth. 3G-licensed radios and their successors were rarely integrated in computers or tablets because Wi-Fi offered a cost-effective and versatile internet connection. An integrated 3G radio, plus SIM card subscription, was just too expensive by comparison. When a mobile solution is needed, users have turned to devices like 3G dongles or, more commonly today, using their mobile phone as a hotspot. 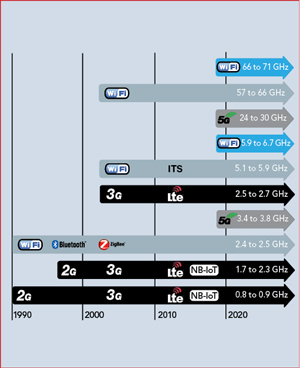 The evolution of wireless technologies was made possible by growing amounts of radio spectrum made available by the world’s regulatory authorities. Figure 2 gives a rough indication of the major technologies and frequency bands involved. At the 2019 World Radio Conference, significant new allocations are expected for Wi-Fi and 5G to support the increasing demands for wireless data communications.

One would think that after 3G and Wi-Fi fought their battles, the demarcations between the two technologies would be clear: Wi-Fi for private areas such as home and office and 3G everywhere else. But, no.

Initially, the telephone operators in 3GPP were naturally quite suspicious about the development of so-called “hotspots,” public places where people could get access to high speed internet without needing a subscription. Fortunately for the telephone operators, it turned out that running a large number of hotspots was not trivial, particularly for large retail and hotel chains, cities and trains. Public hotspot companies have been slowly absorbed by the telephone operators, who started to further embrace Wi-Fi and learned that “unlicensed” was not as bad as it sounded. Operators even developed strategies to use public hotspots with private routers to “off load.” In other words, they used Wi-Fi connected hotspots for traditional phone services.

Finally, with the rapid growth of data traffic, especially via video applications like YouTube, the operators need increased capacity. But getting more frequency bands is not easy. A faster way of getting this capacity, next to leveraging Wi-Fi, was realizing that the successor of 3G, 4G or LTE technology can also run in the ISM band. This realization gave rise to the concept of LTE with licensed assisted access (LAA). The 3GPP specifications allow both Wi-Fi and LTE-LAA to be used in the same 5 GHz spectrum. The first installations of LTE-LAA are being planned now, but we will have to wait and see if LTE-LAA is a hit. 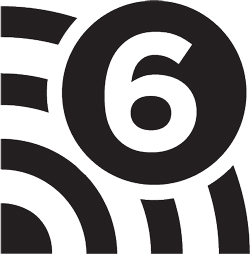 Now that we understand history, we can see a new battle looming. The IEEE 802.11 has been working diligently on higher speed versions, 11n and .11ac, and is in the process of completing .11ax. At the same time, the 3GPP is moving on from 4G/LTE and investing heavily in 5G. In any case, it should not come as a surprise that the talk is (again) about which technology is going to win: 5G or IEEE 802.11ax. Both will be in the high data rates (Gbps) and quite power intensive to get good range, while trying to infringe on each other’s territory. 5G is claiming that it will have “way better indoor penetration,” and .11ax is throwing out the slogan, “5G has arrived and it is called Wi-Fi 6.”

Wi-Fi 6 is an evolution of Wi-Fi 5, but it offers new, additional capabilities that greatly improve its capacity and ability to share spectrum efficiently and without any dramatic “hang-ups” that sometimes occur in high density, high load situations. These improvements show that Wi-Fi technology has reached a level of maturity that increases its attraction for consumers, enterprises and service providers.

IEEE 802.11ax has a clear path worked out, although with the increased data rate the range is definitely reducing. Interestingly, Wi-Fi has turned this disadvantage into an advantage by focusing this new IEEE 802.11ax standard on distributed Wi-Fi (Wi-Fi Mesh) and enabling the use of multiple channels at the same time to connect multiple access points in different rooms to the main router. The focus of IEEE 802.11ax is on full indoor coverage-every nook and cranny in a home or office building covered with the same high data rate, creating an experience that will not easily be replaceable with 5G.

However, 5G is facing its own serious challenges, including delays. 5G’s higher data rates also create a penalty on its range and, for cellular base stations, coverage goes “by the square.” The expectation is that the range for 5G will probably decrease by less than half, forcing the number of base stations to more than quadruple. In dense urban areas, where finding real estate to place base stations is expensive, this will mean rolling out 5G infrastructure will be a significant expense, at the same time many operators are still recovering from their 4G investments.

Though it varies a bit by country and the financial structure of the telephone operators, the belief is that higher data rates will be needed to sustain the consumer and business appetites for higher data rates, particularly in dense population settings where the use of licensed spectrum can be better controlled than unlicensed.

A BATTLE AFTER ALL?

In the end, who is going to win?

Both 5G and Wi-Fi have very particular characteristics that will be beneficial for connecting computers—including all the devices that can now be classified under this term—to the internet. The operator that can best exploit both technologies to its advantage and define and execute a strategy that leverages both will become the winner. This operator will make a worry-free and seamless experience for the consumer, allowing fluid transitions between the two standards when necessary. Seen from this perspective, the ultimate winner of this technology battle will be the end user.