We use cookies to provide you with a better experience. By continuing to browse the site you are agreeing to our use of cookies in accordance with our Privacy Policy.
Home » Multi-Channel Radar Modules for 24 GHz ISM Band
Industrial/Scientific/Medical Channel 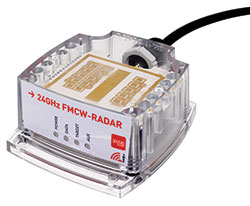 Frequency modulated continuous wave (FMCW) radar measures distances and relative velocity of targets, but the angular position of an object inside the viewing area of the radar antenna cannot be determined by a simple one transmit and one receive antenna per channel configuration. However, the angle is an important measurement parameter in many applications, requiring transmit and/or receive channels to be added to the radar.

IMST is addressing this issue with multi-channel radar modules for the 24 GHz ISM band, currently focusing on the development of the sR-1200e certified module and two development modules, the sR-14MP and the sR-1800e. The sR-1200e 24 GHz radar module comprises one transmit and two receive channels enclosed in a waterproofed housing (IP65), either black or transparent. The receive channels measure I/Q data, with the A/D conversion, signal processing, ramp generation and parameter setting done by an integrated TI digital signal controller. The radar module features an Ethernet (Power-over-Ethernet) interface, and other interfaces can be supported if requested.

In cases when the elevation angle measurement is also required, at least a third receive antenna is needed. Such a configuration has been developed by IMST by applying the monopulse (MP) technique to the sR-14MP module, which features one transmit and four receive channels. The four receive antennas are placed in a square formation close to the transmit antenna. Evaluating the time-of-arrival from the pair of two vertically-displaced antennas, calculation of the elevation angle becomes possible, in addition to the azimuth angle, which is determined by the pair of two horizontally-separated antennas.