We use cookies to provide you with a better experience. By continuing to browse the site you are agreeing to our use of cookies in accordance with our Privacy Policy.
×
Stay Connected :
Home » Antenna Arrays for 5G Improve SNR and Capacity
4G/5G/Cellular One objective of today’s wireless communication systems is to serve as many users with the highest possible data rates within the constraints of radiated power limits and operating budgets. Improving the signal-to-noise ratio (SNR) is key to improving data rates. Serving more users is possible if channel resources are reused. Many algorithms have been adopted to improve the SNR with the goal of reuse across the time, frequency and coding spaces.

Antenna arrays have become part of the standard configuration in 5G wireless communication systems. Because there are multiple elements in antenna arrays for these types of applications, they are commonly referred to as multiple-input-multiple-output (MIMO) communications systems. Antenna arrays can help improve the SNR by exploiting the redundancy across the multiple transmit and receive channels. Arrays also make it possible to reuse the spatial information in the system to improve coverage.1 The following sections explain the benefits and tradeoffs that can be made in a MIMO communications system design. For the examples described, an operating frequency of 60 GHz is assumed.

The simplest wireless channel is based on line-of-sight (LOS) propagation. This type of channel can often be found in rural areas. Antenna arrays in this scenario can improve the SNR at the receiver and, in turn, improve the communication link’s bit error rate (BER). Figure 1 shows the BER using binary phase shift keying (BPSK) modulation for the following communication system configurations:

To simplify the analysis, we use a four-element uniform linear array (ULA) with half wavelength element spacing. The number of elements can be extended and different array geometries considered.

In the MISO and SIMO systems, we assume the array on one end of the channel can be steered toward the single antenna on the other end of the channel to improve the SNR. With pre-steering, the performance of a MISO system matches the performance of a SIMO system, both resulting in a 6 dB gain in SNR. A MIMO system with LOS propagation can benefit from both transmit and receive array gains. As expected, the BER in Figure 1 shows that the transmit array and the receive array each contribute 6 dB of array gain, resulting in a total gain of 12 dB over the SISO case. 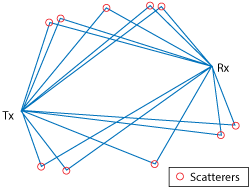 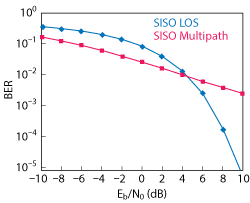 Because LOS channels do not apply in all applications, we next look at multipath fading environments, starting with an example that uses 10 randomly placed scatterers in the channel. This results in 10 paths from the transmitter to the receiver, as shown in Figure 2. For simplicity, assume that the signals traveling along all paths arrive within the same symbol period; this is a frequency-flat channel. The resulting BER is shown in Figure 3 for a fading channel. When compared with a SISO LOS channel, the BER falls off much more slowly, with the increase of energy-per-bit to noise power spectral density ratio (Eb/N0) due to fading caused by multipath propagation. 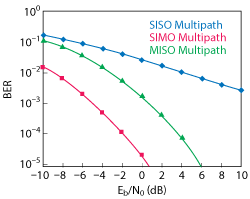 Figure 4 BER for a multipath channel.

Things get more interesting when there is multipath propagation in a MISO system. In this case, if the channel is known to the transmitter, the strategy to improve the SNR is similar to MRC. The signal radiated from each element of the transmit array should be weighted so that the propagated signal can be added coherently at the receiver. The transmit diversity gain can be seen in Figure 4: When comparing the MISO results to the SIMO multipath channel case, the performance of a MISO multipath system is not as good. This is because there is only one copy of the received signal, while the transmit power is spread among multiple paths. It is certainly possible to amplify the signal at the transmit side to achieve an equivalent gain, but that introduces additional system cost. 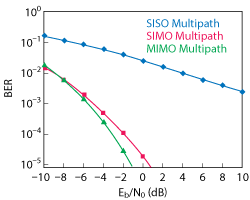 We next focus on a multipath MIMO channel where the number of scatterers in the environment is larger than the number of elements in the transmit and receive arrays. This type of environment is often referred to as a rich scattering environment. As was the case shown in Figure 2, there are multiple paths available between the transmit array and the receive array because of the existence of the scatterers. Each path consists of a single bounce off the corresponding scatterer. 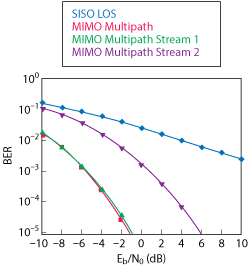 Figure 6 BER based on spatial multiplexing. 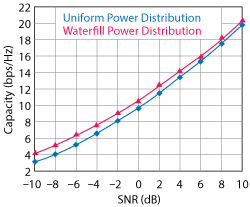 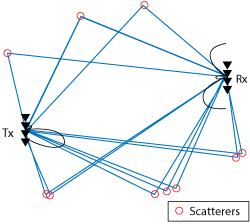 The idea of spatial multiplexing is to separate the channel matrix into multiple modes so that the data stream sent from different elements in the transmit array can be independently recovered from the received signal. To achieve this, the data stream is pre-coded before transmission and then combined after reception. Information received by each receive array element is simply a scaled version of the transmit array element, which means it behaves like multiple orthogonal subchannels within the original channel. The first subchannel corresponds to the dominant transmit and receive directions so there is no loss in the diversity gain. It is now possible to use other subchannels to also carry information, as shown in Figure 6, for the first two subchannels. Although the second stream does not provide gain as high as the first stream, because it uses a less dominant subchannel, overall information throughput is improved.

The most intuitive way to transmit data in a MIMO system is to uniformly split the power among transmit elements. However, the capacity of the channel can be further improved if the channel is known at the transmitter. In this case, the transmitter could use the waterfill algorithm3 to make the choice of transmitting only in the subchannels where a desired SNR can be achieved. Figure 7 shows the comparison of system capacity between the two power distribution schemes. The result confirms that the waterfill algorithm provides better system capacity compared with the uniform power distribution. The difference gets smaller when the system level SNR improves.2 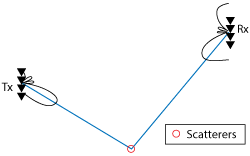 How do these different techniques relate to each other? Starting from the LOS channel, the benefit provided by the array is an improvement in the SNR. Array gain is achieved with beamforming. On the other hand, Figure 8 shows a MIMO channel. Note that the figure depicts only the pattern for the first data stream; nevertheless, it is clear that the pattern no longer has a dominant main beam. Figure 9 represents the scene if the number of scatterers is reduced to one. Therefore, the LOS channel case or, more precisely, the single scatterer case can be considered a special case of precoding. When there is only one path available between the transmit and receive arrays, precoding simplifies to a beamforming scheme.

Array processing can be used to improve the quality of a MIMO wireless communications system. Depending on the nature of the channel, the arrays can be used to either improve the SNR, via array gain or diversity gain, or improve the capacity via spatial multiplexing. The plots shown in the article were generated with MATLAB® and the Phased Array System Toolbox.4