We use cookies to provide you with a better experience. By continuing to browse the site you are agreeing to our use of cookies in accordance with our Privacy Policy.
Home » USB/Ethernet-Controlled Miniature Switch Modules 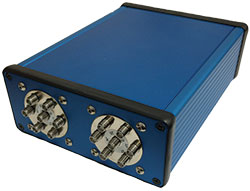 Remote operation is accomplished with TCP/IP commands to the matrix’s Ethernet interface. Switch control is also accessible using a USB virtual serial port and the provided command set. The interfaces enable the coaxial switch to be set to the desired position and the position read back to verify switching. The miniature switch modules features a graphical user interface (GUI) that enables the user to control the switches through graphical icons and visual indicators, instead of text-based interfaces or typed command labels. The interface is compatible with multiple system platforms, including NI’s LabVIEW, which enables quick device interfacing and integrating switch control with existing programming.

Teledyne Relays has a heritage in military programs that spans more than 50 years. Teledyne Relay products are also used in industrial, commercial and medical applications.