We use cookies to provide you with a better experience. By continuing to browse the site you are agreeing to our use of cookies in accordance with our Privacy Policy.
Home » Freescale RF revenue drops four percent in Q2
Industry News

Announcing fiscal second quarter 2015 earnings results, Freescale reported RF segment revenue of $177 million, 3.8 percent below Q1 and 48 percent above last year's second quarter. The segment's revenue comes primarily from LDMOS power transistors used in cellular base stations. The company attributed the sequential decline to "slowing wireless capital expenditure spending in major markets, including China." The LTE build-out in China has fueled strong growth in the RF segment through 2014 and 2015, despite the slight decline in Q2.

Freescale president and CEO Gregg Lowe said “Second quarter results represented record performance for Freescale. Gross margins of 48.1 percent established a new record and were 300 basis points ahead of the prior year’s quarter. Gross margins have now increased sequentially for 10 consecutive quarters. Adjusted earnings per share of $0.57 were also a record and were 50 percent ahead of the second quarter last year. The execution on gross margin, combined with operating expense discipline and de-leveraging work we have done, have helped generate record operating cash flow as well as record free cash flow in the quarter.”

The company estimates third quarter sales to be between $1.10 billion and $1.17 billion, the midpoint down approximately 5 percent from the second quarter.

Freescale is being acquired by NXP for $12 billion. On July 2, both company's stockholders approved the deal, which is expected to close during 2015. 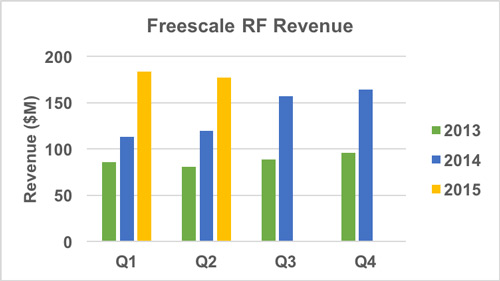