We use cookies to provide you with a better experience. By continuing to browse the site you are agreeing to our use of cookies in accordance with our Privacy Policy.
×
Home » CST STUDIO SUITE 2014: EM Simulation for Integrated Design
Software/EDA Channel

Different components require different simulation methods – this much has been known since the earliest days of EM simulation. For the last decade, CST has been addressing this problem by combining multiple simulation tools into a single product, CST STUDIO SUITE®, with a single user interface for all solvers. In addition, most practical systems are made up of multiple components, each best suited to a different solver technology. In response, the company introduced the System Assembly and Modeling (SAM) framework for simulating multi-component systems.

CST STUDIO SUITE 2014 builds on these features, offering a more efficient approach to simulating both individual components and full systems. The aim is to give users an integrated design environment: rather than designing each element in turn and only combining them at the final stage, the full system behavior can be instead taken into account much earlier in the design workflow. With SAM, engineers can identify and resolve potential issues such as detuning, signal integrity (SI) and power integrity (PI) problems, and electromagnetic interference (EMI) at an early stage and thus obtain a more robust design. 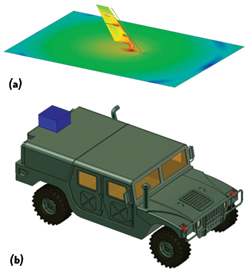 Figure 1 The surface current distribution on a blade antenna (a), and the equivalent near field source (blue box) representing the antenna on a vehicle (b).

At its core, SAM is built on two ideas: breaking down complex systems into individual elements, and splitting the simulation workflow into a set of fundamental tasks to be carried out automatically. The flexible configuration of the workflow sequence allows the user to easily define both simple simulation series and more complex nested workflows including feedback. These workflow cycles allow effects such as heating, thermal expansion and Lorentz forces to be fed back into the EM field solvers, making it easier to analyze applications such as filters and cavities which can be very sensitive to deformation.

To make it easier to build up the system, the library of RF and microwave ‘blocks’ in CST DESIGN STUDIO™ has been enlarged to include more components such as amplifiers, couplers and waveguide elements. These can be connected together with models from other CST modules and from tools such as IBIS and SPICE to form systems for circuit simulation, or converted with a single button press into a combined 3D model for full-wave simulation. Once the blocks are in place, the next step is to define the tasks. CST STUDIO SUITE 2014 introduces wizards to make it easier to set up SAM projects, especially for field source and multiphysics projects, as well as improved SAM integration for PCBs.

Near field sources offer a compact, precise representation of the field around a component – for instance, an antenna or a PCB. These components are often much smaller and more detailed than the structure surrounding them; for example, in vehicles, vessels, masts and industrial equipment. Simulating the components accurately in isolation from the rest of the model, then using their equivalent near field source representation in their environment allows the most appropriate solver type and mesh settings to be applied to each part of the system separately. This approach makes it possible to simulate larger and more complex problems accurately within an acceptable time frame.

Previous versions included broadband near field sources in the time domain solver – CST STUDIO SUITE 2014 introduces them to the frequency domain solver and integral equation solver. Figure 1 offers one application of the new hybrid approach – the antenna is simulated with a time domain solver, a versatile general purpose solver, while the full vehicle is simulated using the integral equation solver, which offers better performance for electrically large structures. Near field sources are, of course, compatible with SAM, allowing the transfer of fields between solvers to be carried out automatically. 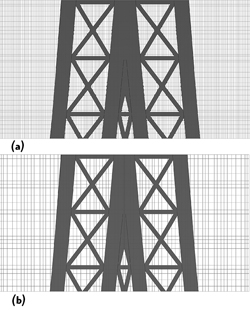 Figure 2 The mesh around a lattice tower with the old mesh engine (a) and the new mesh engine (b) at a similar level of accuracy.

Accurate simulation requires a mesh that models the structure precisely; fast simulation requires a low mesh cell count. To improve the speed of simulation without compromising on the accuracy, the 2014 version of CST MICROWAVE STUDIO® (CST MWS) introduces new meshing algorithms for the hexahedral, tetrahedral and surface meshes.

The Perfect Boundary Approximation (PBA)® and Thin Sheet Technique (TST)™ have long been part of CST’s hexahedral mesh engine. The new hexahedral mesh supplements these with a more intelligent approach to discretizing the structure, which can significantly reduce the cell count on complicated structures such as the lattice tower shown in Figure 2 without compromising on accuracy.

The tetrahedral mesh engine is also improved. As well as representing curved structures more accurately and reducing the cell count, the new mesh engine now supports an octree approach. This means that complex models which might once have been difficult to mesh, such as complex imported CAD data, can now be meshed robustly with reduced user effort.

A key aspect of using simulation efficiently as a design tool is being able to fit your tools into your pre-existing design workflow. CST STUDIO SUITE 2014 includes several new features for importing, manipulating and exporting model data to and from other tools. New formats supported for import include Siemens NX, SolidWorks, Solid Edge and Parasolid 3D CAD files, and ODB++ 8.0 and Zuken CR-8000 PCB layout files. Imported geometries can be edited more easily with new picking tools, and the user can now adjust the required accuracies and tolerances when exporting the redesigned, optimized model back into CAD software.

A particular challenge for many engineers working in large teams is keeping track of the changes to the various model files that make up the project. When different people are working on different components of a system, it’s often the case that by the time one element has been designed, the system around it has changed.

With version control, new in CST STUDIO SUITE 2014, the modeler will now automatically alert the user when an external CAD model is updated. The user is then able to choose whether to update the model or keep using the old data. The new imported elements are highlighted in the navigation tree.

For users with very demanding simulation needs, CST STUDIO SUITE 2014 improves the high performance computing (HPC) capabilities of the time domain solver. GPU and CPU computing can now be used in tandem, delivering simulation performance superior to either method when used alone. Cluster computing using MPI is also more efficient, with the ability to parallelize more of the calculation. 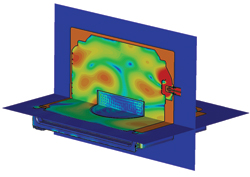 Figure 3 E-fields inside a microwave oven in the XY and YZ planes.

A wide range of different material models are needed to simulate the vast diversity of materials found in the world. New in CST STUDIO SUITE 2014 are materials with time-dependent conductivity and temperature-dependencies, as well as improved support for thin film, wire mesh and dispersive loss tangent materials.

To use simulation efficiently, the engineer has to be able to analyze the results. CST STUDIO SUITE 2014 includes several upgrades to the data visualization tools to make processing of data easier at a qualitative and quantitative level, helping the designer to understand the physical characteristics of the device in order to improve its design. These improvements include faster, more versatile multi-parameter plots, the ability to visualize fields on several cut planes at once (see Figure 3) and a new visualization engine for voxel models such as human body models.