We use cookies to provide you with a better experience. By continuing to browse the site you are agreeing to our use of cookies in accordance with our Privacy Policy.
Home » Real-Time USB Power Sensor

Continuous sample rate is 100 MSa/sec, with a 10 GSa/sec effective sample rate and 100 picosecond time resolution for repetitive signals. This is more than one hundred times faster than most existing USB power sensors, and enables exceptional trigger stability and waveform fidelity when characterizing complex modulation and pulsed signals. Combining the wide dynamic range, fast bandwidth and risetime, and excellent time resolution that Boonton has long been known for with its Real-Time Power ProcessingTM (Patent pending) technology, the 55 Series offers capabilities beyond those of many other USB power sensors and even competing scope-based peak power analyzers. This architecture permits sustained acquisition speeds exceeding 40,000 triggered sweeps per second, ensuring no signal information is missed due to the “snapshot” approach employed by traditional power meters and USB sensors. Gap-free gated and continuous statistical analysis can be performed concurrently at a sustained 100 Mpoints/sec. 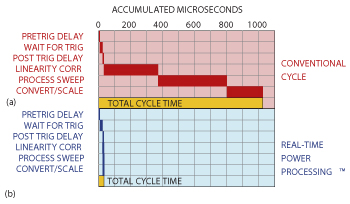 Figure 1 Sequential processing overhead of conventional triggered measurement cycle (a) and Real-Time Power Processing with no delays (b).

Conventional peak power meters digitize the detected RF signal at a high sample rate and store the digitized samples into a FIFO or memory buffer. A typical triggered sweep measurement cycle is shown in Figure 1. Once a trigger occurs, sampling continues until the buffer contains enough samples to complete the sweep, then acquisition halts so a microprocessor or DSP can process the raw samples into a trigger-synchronous trace buffer. Following that, the computed power versus time trace may be further analyzed to yield time-gated or event-gated measurements such as average or peak pulse power and statistical measurements. In USB sensors, the sweep and/or processed measurement data is periodically scaled to dBm or watts, then transmitted to the host PC for display and additional analysis.

Typically, these steps must take place sequentially, and sample acquisition for a new sweep cannot restart until the microprocessor has completed most or all steps in the sweep processing sequence. This results in acquisition gaps during which time no data is gathered and the trigger cannot be armed. Processing and re-arm latency can range from 10 to 300 milliseconds for typical triggered pulse measurements. Re-arm times are further extended when pre-trigger measurements are required – common when measuring pulses, transients and signal edge transitions, since the leading edge usually serves as the trigger signal.

If the pulse repetition interval (PRI) of a periodic signal is shorter than the sweep’s measurement cycle time, then one or more pulses will occur before the trigger re-arms, and events of interest will be missed.  When trace averaging and multi-sweep envelope accumulation are enabled, it will take far longer than expected to acquire enough sweeps to fulfill the averaging criteria.

A conventional power meter capable of acquiring 3 to 30 triggered sweeps per second has difficultly providing fast and meaningful test results with some of today’s high-speed, agile wireless and microwave signals.  Although some models offer buffered measurement speeds up to several thousand measurements per second, these untriggered, “streamed” readings offer little useful information for synchronous signals. 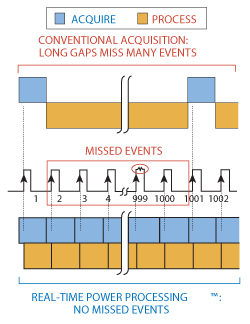 The Real-Time Solution: Close the Gap

Boonton’s Real-Time Power Processing technology addresses the shortcomings of conventional power measurement techniques in several ways. By combining a dedicated acquisition engine, hardware trigger, deep sample memory, and a real-time optimized parallel processing architecture, it is possible to perform most of the sweep processing steps simultaneously, and beginning immediately after the trigger instead of waiting for the end of the acquisition cycle.

The advantages of the Real-Time Power Processing technique are shown in Figure 2. Key processing steps take place in parallel, and keep pace with the signal acquisition. With no added computational overhead to needlessly prolong the sweep cycle, the sample buffer can’t overflow, so there is no need to halt acquisition for trace processing. This means gap-free signal acquisition, and guarantees that intermittent signal phenomena such as transients, dropouts, or interference will be reliably captured and analyzed.  These sorts of events are most often missed by conventional power meters due to their acquisition gaps while processing takes place.

Since acquisition is continuous, and the trigger system is implemented in dedicated hardware, it is possible to further shorten the cycle by eliminating the pre-trigger interval for all but the initial trigger event. In most cases, the trigger can be re-armed within microseconds of the end of the acquisition interval rather than the tens or hundreds of milliseconds later, as is the case with conventional power meters.

Why Snapshots Are Not Enough

So what does Real-Time Power Processing offer to the typical user? The result can be likened to viewing a live video versus a slideshow – there is never an instant during which the signal is not being acquired, analyzed and presented to the user. The Boonton 55 Series USB power sensors are capable of capturing more than 40,000 triggered sweeps per second and analyzing each for gated or overall peak, average and minimum power, as well as performing real-time
statistical analysis (CCDF) on the signal.

As an example, a typical short-range radar transceiver might use a 15 microsecond chirped pulse repeating at 2 kHz (a 500 microsecond PRI). For this signal, the power meter would typically be set for a time-base of 2 µs/div (total sweep duration of 20 microseconds), with a few microseconds of pre-trigger delay so both the leading and trailing edges of the pulse could be analyzed. If captured at a 100 MSa/sec acquisition rate, this sweep would contain 2000 power samples. Using a fast microprocessor or DSP, the steps needed to process the sample buffer into a usable sweep might take an additional 20 milliseconds once the sample buffer fills and acquisition has been halted. During this processing time, another 40 signal pulses will have passed by – untriggered and unmeasured. So the conventional power meter has captured only one of every 41 pulses, and discarded over 97 percent of the usable signal.  Increase the PRI to 20 kHz, and 99.8 percent of the signal information is missed.

USB 2.0 high-speed communication with a PC host permits simultaneously acquired, overlaid average and envelope (peak-minimum) traces to be displayed at full video rates. In this way, a quiet, trace-averaged waveform can be viewed, while still spotting fleeting transients. Flexible peak/min hold capabilities allow even a single transient occurring over hours of monitoring to be reliably captured and displayed.

In a power meter equipped with Real-Time Power Processing technology, the sweep processing takes place as the power samples are acquired, so there is minimal latency to re-arm the trigger system. Even the fastest signals can be acquired and analyzed without missing any triggerable events. With no acquisition gaps or sample decimation, users are ensured of maximum accuracy and minimum test times.

The 55 Series sensors are made in the USA, and include a flexible, multi-purpose I/O connector that can serve as an analog input, status output, external trigger input or trigger output. Connecting two or more sensors with a simple “tee” connection permits master/slave triggering for synchronized, multi-channel measurements – no external trigger modules are required.  The bus-powered sensors connect directly to a standard USB 2.0 port with a locking, removable cable. A full-color, programmable LED indicates acquisition status, faults or alarm conditions.