We use cookies to provide you with a better experience. By continuing to browse the site you are agreeing to our use of cookies in accordance with our Privacy Policy.
Home » Blogs » Pat Hindle, MWJ Editor » IME/EMC 2014 Shines

The China International Conference & Exhibition on Microwave and Antennas (IME/China) took place October 29 to 31 at the Shanghai Everbright Convention & Exhibition Center. This is a microwave show combined with an EMC show which is the primary focus with the EMC booths up front and the microwave companies in the back. This year’s show was well attended and the booths were built out much better than previous years.

A red carpet and brass band welcomed visitors in the rain on the first day.  The larger test and measurement companies had significant booths such as Keysight, R&S, Anritsu, CETC 41 and MVG along with the software companies such as NI/AWR and ANSYS. Well represented were the cable and connector companies which included Frontlynk, GigaLane, Rosenberger, H+S, Times, Radiall, Cinch, Emerson, Mitron and Spinner. Also the materials companies included Rogers, Isola, Park and Premix Oy plus foundries including Ommic and WIN.  The component companies included Macom, Mitron/Mini-Circuits, Bowei, Corad, Sanetronic, Corad and others. Of course, the EMC companies were front and center with ETS, Teseq, Everfine, TDK, Aaronia, EMC Technology, AR, Toyo and others. 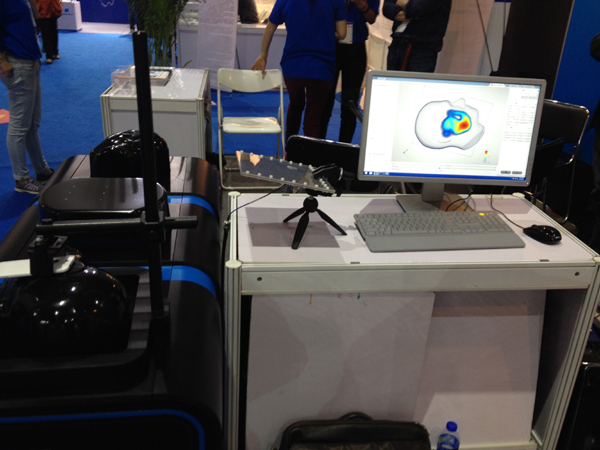 A new company I came across is Art Fi from France (used Twitter, even in China).  They had a very interesting SAR measurement system, called ART-MAN, with head and body formations where phones and antennas can be tested. It utilizes a novel RF probe-array and amplitude/phase patented measurement technology and provides full 3-D Specific Absorption Rate assessment in a matter of seconds. ART-MAN is equipped with standards compliant head and body mannequins, sealed and filled with a new time-stable broadband IEC 62209 / IEEE 1528 compliant tissue material. With ART-MAN, fluid adjustment and exchange is then a burden of the past. It allows testing of all available communication modes (GSM, WCDMA, WLAN, LTE, etc…) within the 0.7 – 6 GHz range.

There were 3 conference rooms around the perimeter in which MicroApps-like talks given by various companies were given.  However, these were not much of a focus for the attendees and most people spent their time on the exhibition floor. Overall, it was one of the better years for this event as the exhibition was strong and so was the attendance.