We use cookies to provide you with a better experience. By continuing to browse the site you are agreeing to our use of cookies in accordance with our Privacy Policy.
×
Stay Connected :
Home » Blogs » Richard Mumford, MWJ International Editor » DSEI 2017 – Commanding Interest and Contributing Innovation

Last year’s European Microwave Week Exhibition at ExCeL London saw one large Hall of the exhibition centre house a multitude of exhibitors, which attracted a significant number of visitors. However, those from our industry frequenting the venue for the 2017 Defence & Security Equipment International (DSEI) from 12 to 15 September encountered, in comparison, an exhibition on steroids and armed to the hilt with rifles, rocket launchers and tanks that was spread over 18 halls, not to mention the naval vessels moored at the adjacent docks.

This biennial event is not only ‘large scale’ it is also truly international – this year the DSEI exhibition floor played host to over 40 international pavilions, with several featuring for the first time, including: Bulgaria, Hungary, Malta, Slovakia, and Slovenia, while the UAE returned in force. Many other countries have increased their pavilions to accommodate more local industry and expertise. Poland has more than quadrupled its presence, with Austria and Italy nearly doubling in size, while the Czech Republic has grown by more than 50 per cent since DSEI 2015.

Unsurprisingly, the UK pavilion was the largest, while the German pavilion hosted over 30 companies – an indication of the renewed importance of defence spending and exports within the country. France continued to have a strong presence with over 24 companies in its national pavilion in addition to ten individual companies.

While defence hardware and military fire power are impressive less ‘visible’ technologies such as those offered by the RF and microwave industry play just as significant a role. Recognising this, DSEI 2017 saw the launch of an Innovation Hub for disruptive technologies to reflect the rising number of pioneers from sectors beyond DSEI’s traditional exhibitor-base that have relevant and highly skilled people, solutions and applications which are transferable to defence and security. The Innovation Hub provided an opportunity for companies and Small to Medium sized Enterprises (SMEs), from a wide range of industries, to demonstrate their emerging technologies.

From semiconductors and PCBs through to tanks and naval vessels DSEI covered the complete defence and security sector and military uniforms mixed with business suits as attendees looked to source the latest equipment and systems, develop international relationships, and generate new business opportunities.

Being so vast and all encompassing there was the danger of needing night sights and a fleet of spy drones to identify the products and systems relevant to the RF and microwave sector. Nevertheless, the mission was far from impossible and following is a selection of key announcements, new products and participating exhibitors relevant to the RF and microwave industry.

Being able to offer the gamut of semiconductor technologies – GaAs, GaN, SiGe and CMOS, allied to silicon-on-insulator (SOI) technology – puts Analog Devices, Inc. (ADI) at the forefront of innovation, which it illustrated through a number of demonstrations. One headlined, Breaking Through the Barriers of Phased Array addressed RF-to-Bits, L-Band through Ka-Band phased array radar solutions. The company showed a complete X-Band phased array signal chain including TR module, core IC, synthesizers, frequency converters, and high-speed digitisation. The demonstration included ADI’s core ICs for hybrid and analogue beamforming solutions for military and industrial radar and communication applications. 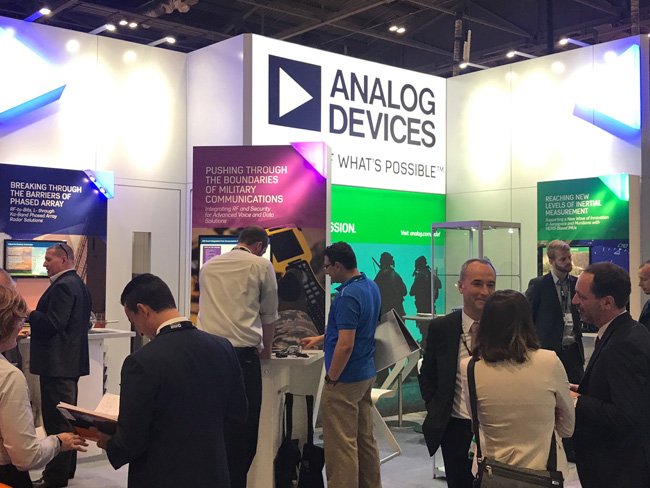 Keeping with radar the DemoRad – ADI’s complete 24 GHz FMCW radar sensor solution for automotive, industrial and consumer applications, was featured. It was shown how the DemoRad platform allows users to have a complete radar sensor running within minutes out of the box. Also highlighted was the AD-TRXBOOST1-EBZ TRx to core chip, which adds gain and reduces the noise figure by adding an LNA, tuned for 2.45 GHz (ADL5521) in series with the RX input of the FMCOMMS2/FMCOMMS3/FMCOMMS4/FMCOMMS5 boards. It also adds gain and increases the output power by adding a broad band gain block (ADL5610) in series with the TX output of the same boards.

Cobham Antenna Systems provides antenna solutions for systems designed to compromise the unlawful use of drones. The range consists of four main types of antenna which can be combined or configured in arrays for a multitude of scenarios. They are: Wideband Omni-Directional antennas that can be used for general surveillance applications as well as high power jamming; Directional Helix antennas provide high gain and efficiency while reducing interference with nearby systems; Directional Flat Panel antennas provide high gain in a small unit size especially for higher frequencies; and High Power Ultra-Wideband Directional antennas can cover multiple bands within a single unit providing up to 10 dBi gain. High power (100 W) and circular polarisation provides powerful combinations of features. 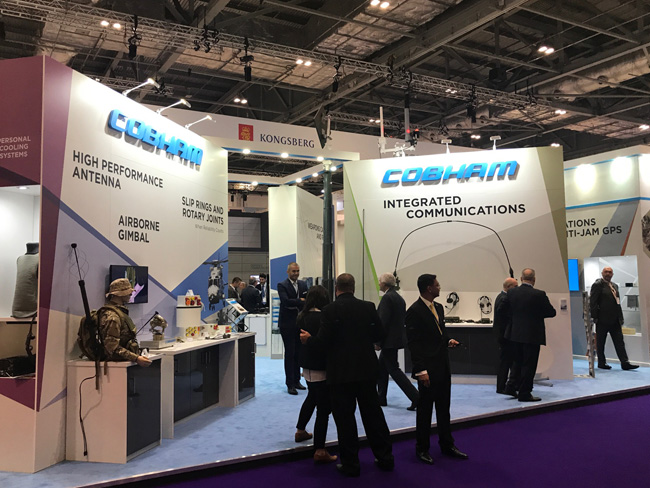 Also featured were: E/J-Band Sinuous antennas that provide for high sensitivity reception of all possible signal polarizations, and are available with various connector configurations, both with and without internal hybrid assemblies and RF switches; and the Model 94800568 dual polarized crossed notch antenna that operates over the 2 to 18 GHz frequency range. The antenna VSWR is 2.5:1 maximum and <2.0:1 over 90% of the frequency range. Antenna gain ranges between 5 and 10 dB and is +8 dB nominal.

The CST STUDIO SUITE® from Computer Simulation Technology (CST) is a familiar tool to RF and microwave engineers/designers. Unsurprisingly, at DSEI the company specifically demonstrated EM simulation for defence applications. When used in a defence context, the often conflicting requirements of antenna interoperability, high performance, reliability, immunity, radiation hazards, lightning protection, stealth and weight all add to the complexity of the component and system design, which the CST STUDIO SUITE can help designers address.

The Filtronic Broadband team promoted the company’s range of ultra-high capacity microwave and millimetre transceivers – proven technology solutions enable the next generation of ultrahigh capacity long-range data links. In particular, innovative architectures with a focus on high levels of integration minimise size, weight and power and enable deployment of multi-channel systems in a small envelope. A high-power, multi-channel configuration supports >10 Gbps in each 2 GHz bandwidth and flexible system configurations can be optimised to meet customer specific system requirements and applications; for example, ultra-low noise receivers.

Harwin has strengthened its portfolio of interconnect solutions designed for implementation in harsh application environments with new additions to its flagship Datamate high reliability connector (Hi-Rel) product family. With the objective of addressing space-constrained RF/wireless designs, each member of the Datamate Coax series comprises multiple (ganged) coaxial contacts in a compact housing. Featuring 2, 4, 6 and 8 contact options, the contacts contained within each connector are arranged into single or double ended jack formats with 4.00 mm pitch. They deliver strong RF performance characteristics up to frequencies of 6 GHz. Key application areas include avionics, radar, robotics, industrial automation, military and medical, as well as general wireless communications.

HUBER+SUHNER showcased its innovative solutions with military applications including its Direct GPS-over-Fibre solution, which addresses the power supply challenges within a GPS system by making use of newly developed Power-over-Fibre technology. The company also demonstrated its next generation airborne interconnect – the EAsy CONnection (Eacon) self-locking connector that eliminates the need for lockwire/safety wire that can lead to potential foreign object debris (FOD) in an aircraft. It is a simple cable and connector solution for a flexible and fast field-termination of microwave cable assemblies without compromising high performance.

Keysight Technologies addresses multiple markets in all spheres. Its test equipment, software and measurement systems are applied in most sectors with aerospace and defence being no exception. At DSEI the company offered a snapshot of its capabilities in the defence arena with various products and configurations. An obvious candidate is the versatile FieldFox Handheld RF and microwave analyzers for operation in the field. The instrument’s precision means that users can: measure with confidence from 4 to 50 GHz, capture every signal with real-time spectrum analysis (RTSA) up to 50 GHz; is rugged enough to meet MIL-specs and is lightweight. It can be configured as a cable and antenna analyzer (CAT), vector network analyzer (VNA), spectrum analyzer and all-in-one combination analyzer

QinetiQ’s extensive stand at DSEI was the first major international showcase of its new brand and visual identity. Experts were on hand to share examples across five themes: Autonomy & Robotics, which demonstrated how QinetiQ enables unmanned systems to operate with each other and manned systems across air, land and sea; Disruptive Technologies featuring cutting edge innovations that promise to have a major impact on future capability; Security, where highlights included the ASX communications intelligence system, SPO-NX crowd security scanner, and Bracer encrypted communications handset; Test & Evaluation services that are critical to procurement and through-life support of military platforms and weapons systems, and the self-explanatory Training & Rehearsal section. 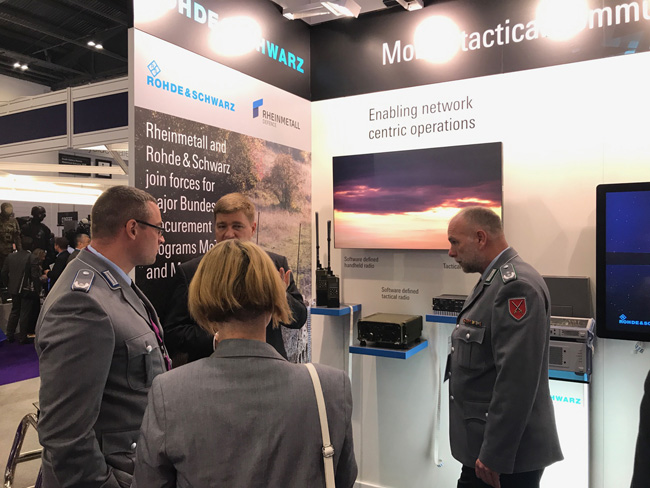 Rohde & Schwarz presented its cutting-edge secure communications and intelligence systems. In June 2017, the company was awarded a contract from the German Federal Ministry of Defence (BMVg) to equip 50 command and control vehicles with the joint radio system for the German Armed Forces. This system is the first pillar in the MoTaKo modernization project for which Rohde & Schwarz ported diverse existing waveforms to the radios, based on the internationally established software communications architecture (SCA).

The company has created the R&S HDR high data rate, jam-resistant family of waveforms to match a variety of mission scenarios and to provide simultaneous voice and data communications. In combination with the advanced software defined radios (SDRs) from Rohde & Schwarz, system solutions are obtained that deliver mobile tactical communications in network centric operations for individual soldiers as well as vehicular, naval and airborne platforms.

Also on show was R&S NAVICS, which takes advantage of commercially available IT technologies for internal and external naval communications. It is an IP-based, scalable, easy-to-operate solution. It is modular, scalable and can be used on a variety of platforms. It is already deployed by major European countries. Also showcased were the company’s COMINT/C-ESM solutions, which are radio monitoring systems that can be fully customized to meet the requirements of the most diverse intelligence missions.

The new PTX8815 TWTA is designed for Ka-Band radar applications such as naval fire control. Featuring broadband capability, covering 34 GHz to 36 GHz, it offers a peak power of over 1100 W in the mid-band and 600 W at the band edges with a maximum duty of up to 12%. This top class TWTA addresses high fidelity radar requirements for low close-to-carrier phase noise and spurious performance. This development follows the launch in 2016 of the PTX8807 Ka-Band, 200 W MPM which is aimed primarily at EW applications and was also featured at the show.