We use cookies to provide you with a better experience. By continuing to browse the site you are agreeing to our use of cookies in accordance with our Privacy Policy.
×
Stay Connected :
Home » Blogs » Richard Mumford, MWJ International Editor » April ARMMS Conference Puts 3D into Focus

The ARMMS Conference organisers have always prided themselves on offering a 360º view of the RF and microwave industry but probably took it more literally than normal for the April 2017 conference where the star presentation, given by William Otter of Imperial College London was titled, 3D Printed Waveguides: A Revolution in Low Volume Manufacturing for the 21st Century.

Voted by the conference delegates as the winner of the NI/AWR sponsored Steve Evans-Pughe Memorial Prize for the best paper and a cheque for £200 the paper considered 3D printing for terahertz (THz) applications illustrated by an experimental demonstration of the first 3D printed, optically controlled THz IQ vector modulator. Here, miniature high-resistivity silicon implants are integrated into metal-pipe rectangular waveguides. The 3D printed split-block assembly also houses two packaged infrared laser diodes and a heat sink. The measured performance of a proof-of-principle 4-QAMvector modulator that operates up to 500 GHz was reported. This new hybrid 3D printing THz technology, which combines semiconductor devices with potentially low-cost, high-performance passive guided-wave structures represents a paradigm shift and may prove to be an ideal solution for implementing affordable transceivers in future ubiquitous THz applications.

The paper was a deserved winner but a worthy runner-up in the best paper award was Yi Wang of the University of Greenwich who received the £50 prize for his paper titled: Integrated Multi-Role Microwave Antennas and Passive Circuits. The paper covered the so-called ‘multi-role device’ where multiple circuit functions are combined and integrated in one component. It focused on two topics that have been at the forefront of research in the past few years: integrated filtering antennas and multi-port filtering networks. 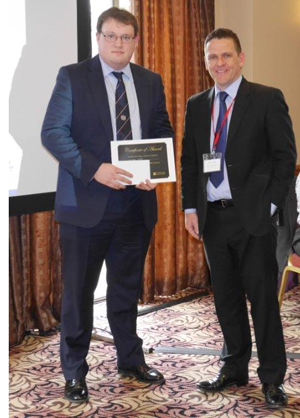 Demonstrating the diversity of the presentations subjects covered included the Convergence of Simulation and Measurement Worlds in the Modern Era offered by Alistair Wingfield of CST, the Linearization of RF Front Ends by Gareth Lloyd of Rohde & Schwarz and the view of Stuart Feeney of SMF Designs Ltd on Low Noise Signal Sources for Radar and Instrumentation.

These are just a cross-section of the 15 technical papers presented to delegates from across the RF and Microwave industry who convened at The Oxford Belfry (near Thame, UK) for the SARAS Technology Ltd sponsored bi-annual gathering of engineers, academics and business people. Credit goes to David Hand of Park Air Systems Ltd. for assembling an interesting selection of papers.

The RF & Microwave Society encourages young engineers by sponsoring up to two engineers (aged 28 and under) per conference. Unsurprisingly, one of the April awards was given to William Otter, while the other went to Dipendra Mistry of e2v who took an historical view but also looked to the future with his paper titled: Magnetron Developments at e2v.

The well established table-top exhibition, which was overflowing and oversubscribed featured a maximum of 20 table top displays and offered a place to discover the practical tools to compliment the subject matter of the conference. It also provided networking opportunities during coffee breaks and the lunch session, while the Society Dinner on the first evening also afforded networking opportunities and more.

The next ARMMS RF & Microwave Society meeting will be held on 13-14 November, 2017 at Wyboston Lakes Conference Centre (near Cambridge, UK).