We use cookies to provide you with a better experience. By continuing to browse the site you are agreeing to our use of cookies in accordance with our Privacy Policy.
Home » Blogs » ROG Blog » PCB Advances Drive Automotive Applications

Automotive electronic circuits were once as simple as switches for headlights and windshield wipers. But modern automobiles take advantage of electronic circuit technology more than ever, often working with high-frequency signals at RF, microwave, and even millimeter-wave frequencies. In fact, some of the radar signals once associated with military fighter aircraft are now the basis for automotive electronic functions, such as collision avoidance, blind spot detection and adaptive cruise control systems. For consumers, these advanced systems promise greater safety and an enhanced driving experience. For the manufacturers of these systems, these automotive applications offer the potential of bringing high-frequency technologies to millions of users. And to suppliers of printed-circuit-board (PCB) materials, such as Rogers Corporation, these emerging applications pose challenges of providing high-performance reliable circuit materials at acceptable prices that help fuel mass-market applications.

Just what are these emerging high-frequency automotive electronic applications? In essence, newer car models can be designed with almost full-perimeter electronic monitoring by means of high-frequency sensors, built into the front, back, and sides of automobiles. These sensors employ radar technology not unlike that used in military electronic systems, but to detect and provide information about moving and fixed objects around the car. Information from the sensors, such as the distance and angle from the car to an object and the speed of the object relative to the car, can be used in a variety of safety and driver-convenience systems, including adaptive-cruise-control (ACC) systems and collision-avoidance systems. Until now, such high-frequency automotive electronic systems have been available mainly on luxury vehicles. But as electronic component manufacturers, including PCB suppliers, better understand the performance requirements of these systems and can more economically provide those components, automobile manufacturers hope to extend the market for ACC, collision-avoidance and blind spot detection systems to a much broader range of vehicles.

Several different frequency bands are used for these high-frequency automotive radars, including at 24 and 77 GHz. For example, in Europe, where the European Telecommunications Standards Institute (ETSI) manages frequency allocations, the band from 24.05 to 24.25 GHz has been set aside for automotive radars systems operating with maximum effective isotropic radiated power (EIRP) of +20 dBm which is currently used for the short and mid-range radar systems. In the United States, it is the Federal Communications Commission (FCC) tasked with “keeping the channels clear.” In 2002, the FCC made modifications to its Part 15 Rules and Regulations that govern the use of frequency transmissions to create Subpart F, Section 15.515, with requirements for ultrawideband (UWB) vehicular radar systems operating from 22 to 29 GHz. In addition, organizations such as the Strategic Automotive Radar frequency Allocation (SARA) group, which is comprised of automobile manufacturers and electronic component suppliers, are promoting the widespread use of automotive radar systems not only at 24 GHz, but in bands at 77 and 79 GHz. The higher-frequency bands provide improved resolution and the possibility for fabricating smaller, lighter sensors and electronic systems because of the smaller wavelengths at those higher frequencies.

The impact of these systems on automotive safety could be enormous. Short-range radars (SRRs) and mid-range radars (MRRs) can be used in the front and rear of a vehicle to prevent front-end and rear-end collisions, respectively. The SRR and MRR sensors can warn drivers of cars in adjacent lanes, preventing front and sideways collisions. And linked to emergency braking systems, these high-frequency sensor systems can control a car’s speed in critical situations to reduce or even prevent level damage and injuries.

Although collision-avoidance and other automotive electronic safety systems can be based on laser radar technology, systems using microwave and millimeter-wave systems provide more stable performance under all weather conditions, including in rain and snow. High-frequency automotive radar systems include pulsed, frequency-modulated-continuous-wave (FMCW), and spread-spectrum systems, with FMCW techniques widely used at 24 GHz. This type of system transmits a signal that is frequency modulated in a linear ramp, receiving the return signal at the same time, typically at distances to about 20 up to 50 m. It measures delay times and frequency differences between the transmitted and received signals, determining distance and angle to an object or, in radar terms, a “target,” as well as the relative speed of the object to the car. The information can then be used by collision avoidance and mitigation systems, ACC systems, cross traffic alert, blind spot detection and other automotive electronic systems. 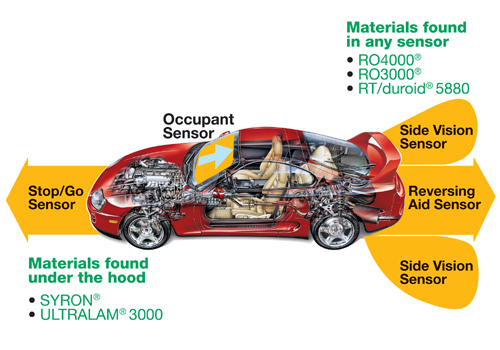 For automotive radar applications, basic PCB material requirements include a relative dielectric constant that is low and consistent with changes in temperature, tight tolerance of the dielectric constant, with good phase stability, a low dissipation factor (for low dielectric-related loss), and low conductor loss.

Circuit-board fabricators often point to the ease of working with low-cost epoxy-based materials such as FR-4, although such materials suffer excessive loss at 24 GHz. Woven-glass substrates based on polytetrafluoroethylene (PTFE) are typically used for millimeter-wave applications. Roger's RO3003™ PTFE/ceramic substrates offer better uniformity when compared to PTFE woven-glass reinforced alternatives. As an alternative, Rogers Corp. has developed its RO4000® circuit materials, which are glass-reinforced hydrocarbon/ceramic laminates. These thermoset materials do not require special handling and are stable across the temperatures, when tested with short term exposures, to which these sensors are typically exposed. They are designed to provide low-loss, phase-stable performance at 24 GHz under the common environmental conditions faced by a typical automobile. RO4003C™ laminate has a relative dielectric constant of 3.38 while RO4350B™ laminate has a relative dielectric constant of 3.48.

Both of these PCB materials exhibit excellent short term thermal stability from -50 to +150°C, with thermal coefficient of dielectric constant of +50 ppm/°C or less across that temperature range that indicates very little change in dielectric constant as a function of changing temperature. The RO4003C material has low dissipation factor of 0.0027 at 10 GHz while the RO4350B material achieves dissipation factor of 0.0037 at 10 GHz, ensuring that both materials will minimize circuit losses at 24 GHz. Both materials also feature excellent thermal conductivity, to effectively dissipate heat when required.

For now, the bulk of the automotive radar market is at 24 GHz. But that market will be moving to electronic systems at 77 and 79 GHz as technology allows and economics permit. For circuit designers and component specifiers, the rules change at these higher millimeter-wave frequencies. With component costs coming down for the 77GHz sensors faster over the last years in combination with better performance of these sensors when compared to the 24GHz, it looks like that the 77Ghz sensors are increasing their popularity and adoption rate by gaining share from the 24GHz sensors.

Don’t miss the next Blog entry to learn more about the PCB material requirements of 77 and 79 GHz automotive radar systems and some of the possible approaches that could help to bring down the prices of those systems for widespread use.

Do you have a design or fabrication question? John Coonrod and Joe Davis are available to help. Log in to the Rogers Technology Support Hub and “Ask an Engineer” today.