The primary goal when measuring a device under test (DUT) is that its measured parameters are unaffected by ambient conditions and unwanted influences from the test setup. While environmental influences are easier to compensate or correct, more effort and know-how may be required with the test setup. This effort increases disproportionately with how precisely the DUT performance is to be determined.

In principle, test and measurement (T&M) setups are often similar. A signal source provides the input signal to the DUT, and the output is measured with a spectrum analyzer, network analyzer or power sensor. For a quick test of the DUT performance, it may be sufficient to simply use this setup and record the measurement; however, more precise data requires more effort. Under certain circumstances, for example, losses or full S-parameters from the test fixture must be considered, as well as the performance of the T&M instrument itself (e.g., phase noise, power supply noise).

When a single CW tone is applied to a nonlinear component such as a power amplifier (PA), unwanted signals will be generated at n multiples of the original frequency, n being the order of the harmonic. To illustrate how the signal source will affect the harmonic performance of a PA, we used two signal sources: 1) an analog RF and microwave signal generator with high harmonic suppression, the suitable signal source. The R&S SMA100B was used for these measurements. 2) An “unsuitable” source with harmonics greater than -30 dBc. The PA used for the measurements was a GaAs design covering 100 MHz to 7 GHz with 27 dBm saturated output power (Psat) and 7 to 8 dB gain.

Figure 1 shows the test setup for the harmonic measurements, using an R&S FSW signal and spectrum analyzer to measure the second harmonic. The suitable and unsuitable signal sources were used to drive the PA, sweeping from 100 MHz to 7 GHz while keeping the output power (Pout) of the PA constant at approximately 7 dBm. The input power (Pin) was leveled to compensate for the cables and the frequency response of the PA. 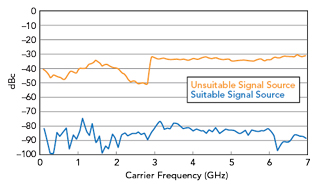 Figure 2 Second harmonic of the suitable and the unsuitable signal sources. 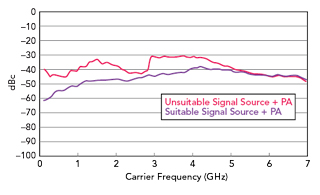 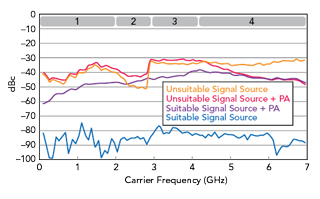 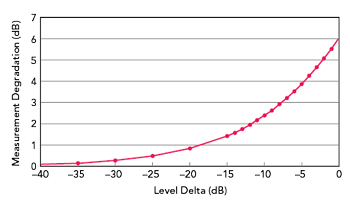 Figure 6 Measurement degradation caused by the second harmonic of the signal source.

The 1 dB compression point (P1dB) at the output of a PA defines the boundary between linear and nonlinear behavior. This is the input power where the small-signal gain of the PA is reduced by 1 dB. As the input power increases, the PA becomes increasingly nonlinear and produces significant harmonic distortion and intermodulation products. 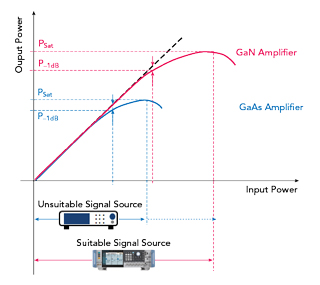 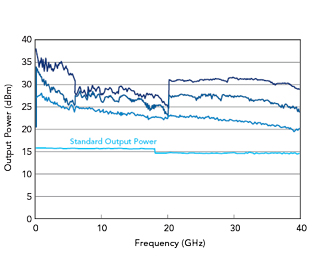 GaN PAs have higher saturated output power capability than GaAs PAs. Assuming the same gain, the GaN PA will require higher input power to reach P1dB and the maximum or saturated output power, designated Psat (see Figure 7). For measuring the P1dB and Psat of a PA, the signal source must have suitable output power. Addressing this need, Rohde & Schwarz designed the R&S SMA100B to have four output power options (see Figure 8). From 20 GHz to approximately 38 GHz, the R&S SMA100B provides more than 30 dBm—compared to the 16 dBm available from traditional signal sources. Higher output power from the signal source may eliminate the need for an external amplifier at the output of the source to drive the PA into compression.

To illustrate this, Figure 9 shows a typical test setup for measuring P1dB and Psat. The power sensor measures the PA output power and feeds back the measurement result to the signal generator via USB, where it can be graphically displayed on the signal generator’s display. The 20 dB attenuator after the PA ensures the power sensor is not overdriven. The DUT is a GaN PA covering 27 to 41 GHz with Psat = 33 dBm and 16 dB gain. The input power (Pin) is swept from -25 to +25 dBm at a carrier frequency of 30 GHz. Figure 10 shows the Pin versus Pout measurements of the PA using a suitable signal source, the yellow trace reflecting the output power and the green trace the linear gain. The y axis accounts for the 20 dB attenuator following the PA. Figure 10a shows a P1dB measurement of 30.2 dBm, and Figure 10b shows a Psat of 33.0 dBm. To measure the Psat of the GaN PA requires Pin = ∼25 dBm at 30 GHz, which is more power than the capability of many signal sources (see Figure 11). Using a signal source with lower output power, P1dB and Psat cannot be measured directly without an additional amplifier. Figure 11 shows 30.0 dBm maximum output power from the PA, which reflects the shortfall of the signal source rather than the performance of the PA. 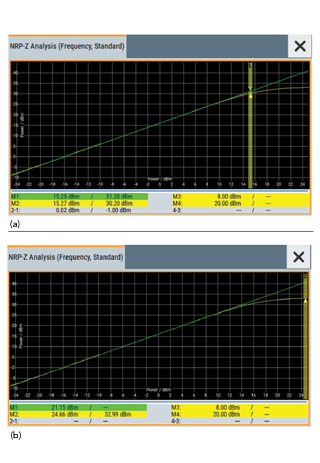 Figure 10 P1dB (a) and Psat (b) measurements using the suitable signal source. 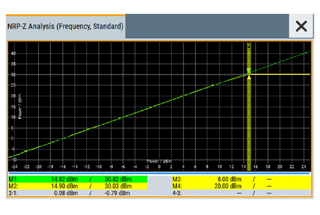 These measurements show that using a signal source with sufficient output power simplifies the test setup, enabling higher power P1dB and Psat measurements without requiring an external amplifier that could introduce measurement errors.

Analog and digital circuits rely on pure clock signals. Typical clock signal performance indicators are PN, jitter, wideband noise and spurs. Similarly, a low PN signal source is needed for measuring DUT performance. The residual PN of the DUT determines the PN added by the DUT to the PN of its input signal. Phase-locked loops in high speed digital applications require an input signal with excellent PN performance, i.e., negligible compared to the residual PN of the DUT.

In this example, the DUT was a test board with a DAC. The best way to measure the residual SSB PN of the DAC is to generate a sinusoidal signal at its output, where the digital input is I = Q = 1. The DAC used here has a digital signal processing unit with a digital up-converter, enabling the digital input data to be resampled and shifted in frequency. The numerically-controlled oscillator of the DAC was set to fout = fsample /9, with fsample = 9 GHz, so the DAC output signal was a 1 GHz sine wave. 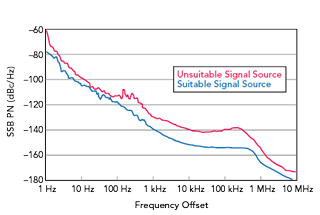 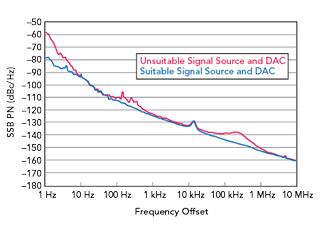 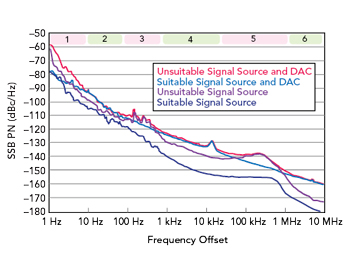 These measurements show the importance of using a low PN signal source. To ensure accurate measurements, follow this process:

1. Measure the SSB PN performance of the signal source using the same frequency and power level as will be used for the DAC measurement. In this example, the DAC output frequency was 1 GHz, so the DAC clock input signal of 9 GHz was divided by 9 in the DAC.

3. Ensure sufficient margin between the DAC measurement and the calculated SSB PN of the signal source. 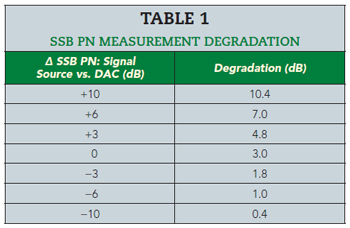 The instrument used to measure the SSB PN is another potential source of measurement error. Although not assessed in this article, a phase noise analyzer with low SSB PN should be used for these measurements to minimize any degradation.