For the Love (and Loathe) of Buttons 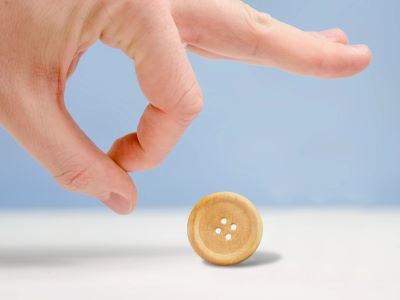 Before I disparage one of humanity’s most enduring inventions — the button — I’d like to take a moment to pay homage to this simple yet effective fastener of fashion and completer of electronic circuits. Buttons have served many functions since their invention as a fashion accessory in 2500 B.C. and today remain one of our primary analog interfaces with the electronic world.

While touchscreens and voice recognition are rapidly changing the human-machine interface, it is still the trusty button that executes many of our choices — from the buttons (see also keys) of a keyboard to the power button on a smartphone to the engine start/stop button on a car.

Most of us have had a love-hate relationship with buttons based on our own disappointing experiences, whether it was with a “close door” button of an elevator, a “cross street” button of a crosswalk or our first pair of button-fly jeans. None of these buttons have proven useful when we’re in a hurry. Contrast these buttons that didn’t work well enough with one that worked too well — Amazon’s Dash button — eventually leading to its demise in 2019.

Mechanical buttons have long been the bane of an industrial designer’s existence. Apple co-founder Steve Jobs took a huge step in removing buttons from our lives with the revolutionary design of the iPhone. Perhaps it was a fear of buttons, known as koumpounophobia, behind his decision to wear buttonless turtlenecks and remove nearly every button from Apple’s first smartphone.

Take heart, button haters, because the shift to a buttonless world is well underway, thanks to a stealthier, more reliable and hermetically sealed solution. MEMS force sensors show great promise of replacing buttons on everything from your smartphone and earbuds to the light switches in your home and the steering wheel of your car. MEMS sensors are not only seamless and fully sterilizable but offer 10x the lifespan of mechanical buttons. They can withstand harsh environments and are designed to be waterproof, dustproof, ice-proof and extremely reliable at a wide range of high and low temperatures.

MEMS force sensors are fabricated as a semiconductor consisting of a base layer and a flexible diaphragm top layer containing four conductive sensing elements or piezo-resistors. Changes in the resistance of these conductors provide a measure of the pressure applied to the top layer. The MEMS force sensor is hermetically sealed for reliability.

Because they are semiconductor-based, MEMS sensors such as NextInput’s (now Qorvo) ForceTouch™ sensors can be as tiny as a miniscule 1 mm2, making them ideally suited as button replacements on earbuds, wearables and other portable devices. The company’s ForceGauge® sensors can be mounted beneath a touch surface or capacitive touch display and can detect force at multiple levels through any material, shape or thickness. In a mobile gaming OLED display application, four to six sensors would be mounted beneath the display surface to better determine the precise position of the applied force. These sensors are sensitive enough to detect as many as 1,000 levels of force!

New hybrid sensors that add infrared (IR) sensing with touch sensing are also on the sensor drawing board. Combining MEMS touch with touchless IR sensing helps eliminate false positives by allowing two different sensors to “vote” on the same event, to better determine a user’s intent. And aren’t we all better off with voting?

So don’t hit the panic button! We’ll soon hit the easy button with MEMS sensors, coming soon to a smartphone, smartwatch, earbud or steering wheel near you!