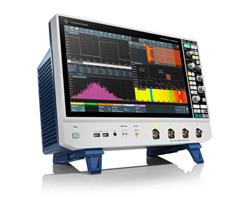 Launched in July, the R&S RTO6 is the next generation of 6 GHz oscilloscopes from Rohde & Schwarz. To enhance usability, it has a new user interface, including a 15.6 in. HD touchscreen with a redesigned front panel. The enlarged display maximizes the waveform viewing area and the R&S SmartGrid lets users drag and drop signals to various locations on the screen. The “app cockpit” provides access to all the oscilloscope’s applications with a single tap.

With 6 GHz input bandwidth and a sampling rate of 20 GS/s, the R&S RTO6 will sample high frequency signals without analog down-conversion, and the acquisition rate of 1 million waveforms per second enables detecting sporadic signal anomalies. The instrument’s digital triggering operates on the ADC samples and can be enhanced to 16-bit vertical resolution in the high definition mode. Direct triggering on high-resolution signals captures signal details, which is not possible with conventional analog triggers that split the measurement signal into two paths. The result is lower trigger jitter, enabling the trigger sensitivity to be optimized for a given application. These attributes enable accurate detection of short, intermittent, burst and pulsed signals, as well as low signal levels, making the instrument valuable for automotive radar applications.

With phase-coherent multi-channel acquisition, the R&S RTO6 is a powerful tool for developing multi-antenna designs. Radar systems use this to estimate the angle of arrival of an object, using the phase differences among multiple receive paths to detect the direction of approaching objects.

Furthermore, 5G NR uses multi-antenna technology for beamforming, i.e., to transmit a signal in a desired direction. A defined phase shift is generated for each adjacent input signal stream, maintaining a constant phase shift is important to keep the beam stable and pointing in the desired direction. The R&S RTO6 provides a phase-coherent measurement of four input streams, which can handle up to four signals within a single 5G NR channel. It also performs MIMO measurements, such as the phase difference between input signals to characterize beams during transmitter testing.

When working with automotive radar applications in the 77 to 81 GHz range, as well as 60 GHz radar for gesture sensing, the signal exceeds the oscilloscope’s bandwidth. This limitation can be overcome using an external mixer, such as the R&S FS-Zxx series, to down-convert the signal. And to compensate for losses from additional components in the signal path, Rohde & Schwarz oscilloscopes have real-time de-embedding capabilities. For all use cases mentioned above, engineers can use the oscilloscope’s built-in measurement tools for basic analysis or the more comprehensive pulse and transient analysis options available in the R&S VSE software suite. 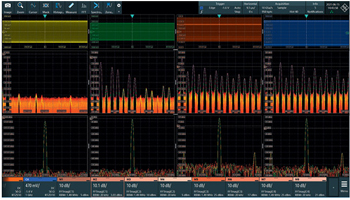 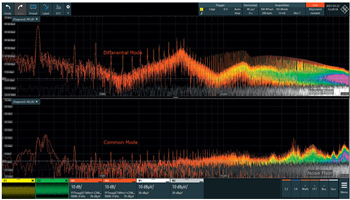 Figure 2 The FFT spectrum analysis function is useful for measuring EMI, such as conducted disturbance.

Compared to spectrum and frequency analyzers, another strength of oscilloscopes is the capability to analyze both time and frequency domains, measure power, monitor trigger signals and decode buses. This range of capabilities enables correlating RF signals with the supply voltage or digital bus, using the time alignment maintained among all the measurements (see Figure 1). This helps when analyzing interactions among subsystems that need to work together. The R&S RTO6 can acquire radar signals simultaneously with CAN bus or automotive Ethernet signals, measuring the delay between the radar and bus protocol signals to determine characteristics like the radar’s analysis time.

When the correlation of frequency and time is important, designers can use the fast Fourier transform (FFT) capabilities of the R&S RTO6. One example is the UWB 802.15.4z standard, which is used for applications such as automotive keyless entry. The R&S RTO6 can inspect the UWB signal in both time and frequency simultaneously, adjusting measurement settings as needed. It also has the same gated FFT feature of other Rohde & Schwarz oscilloscopes, which lets users select a portion of a signal in the time domain and plot the spectrum of that segment. Spectral measurements like channel power and occupied bandwidth can be set to focus on the spectral properties of a specific pulse or when debugging a device being tested.

This same approach can be applied when debugging the electromagnetic interference (EMI) performance by using dedicated near-field probes—provided with Rohde & Schwarz oscilloscopes—with the FFT and trigger capabilities (see Figure 2). The R&S RTO6 can locate EMI signals and sources of spurious emissions on a board, which helps identify and deal with problems earlier in product development, saving the time and expense of fixing issues later in the project.

In addition to spectrum analysis using FFT, the oscilloscope provides applications including automated compliance testing of high speed interfaces, decoding serial protocols and measuring power electronics, with available software options to support special applications. All measurement functions are preinstalled on the oscilloscope and can be enabled with a keycode after the unit is purchased.