The IEEE 802.11ax standard, commonly referred to as Wi-Fi 6, was developed to support the ever-changing Wi-Fi traffic. For better communication efficiency with limited frequency resources, it is designed to handle multiple simultaneous connections to one access point (AP), as well as opening bandwidth to address increased video use—with special attention to 4K video streaming—and substantially more voice traffic due to carrier offload. Implementation of Wi-Fi 6 will yield better spectral efficiency and use of the new 6 GHz band, known as Wi-Fi 6E, as 802.11ax enables far better coexistence schemes, traffic scheduling and higher performance in dense scenarios. It does pose design challenges for engineers, however, and affects the test environments used to verify performance.

The impact of Wi-Fi 6 is expected to be profound. Figure 1 shows the projected growth of the technology in mobile handsets, consumer products and other network elements. Most premium phone models, particularly 5G enabled, already have Wi-Fi 6 embedded. Its cooperative solution with 5G is one reason for the expected fast rise of Wi-Fi 6. Practically speaking, Wi-Fi 6 is a local area context, and 5G is wide area. Wi-Fi 6 frees spectrum, as 5G use cases can be offloaded to use it. 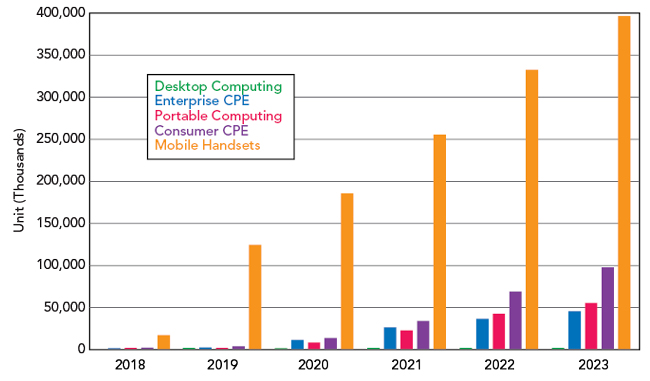 To understand the increased testing requirements for Wi-Fi 6, we will first describe the changes in the 802.11ax standard that are providing these improvements.

Wi-Fi 6 is optimized to increase the average throughput by 4x for users in dense and congested environments. To achieve this enhanced throughput, Wi-Fi 6 can schedule down to 2 MHz bandwidth slices, a 10x improvement over the previous contention-based generations with 20 MHz bandwidth slices. The narrower slices create a dramatic drop in the noise floor by 8 dB, resulting in greater signal range or 8 dB more tolerance to noise and interference. This also increases efficiency by narrowing the subcarrier frequency spacing from 312.5 to 78.125 kHz.

Scheduling the 2 MHz slices extends battery life, as does the Wi-Fi 6 feature of target wake time (TWT). TWT enables a Wi-Fi 6 AP to trigger a client device to wake up and use battery power only when it’s needed. Wi-Fi 6 also makes better use of time and frequency resources, modulation, coding and spatial streams to minimize contention and improve capacity.

OFDMA is a new extension to multi-user MIMO (MU-MIMO) to increase the speed of Wi-Fi 6. MU-MIMO combines signals from separate antennas and spatial path differences to provide up to 12 spatial streams (eight in the 5 or 6 GHz bands and four in the 2.4 GHz bands), a considerable upgrade from the four provided by Wi-Fi 5. In beamforming mode, an AP can direct signals to desired clients and aim the effective receive (Rx) signal power away from other devices.

Multi-user uplink (UL) transmissions typically require devices to be carefully calibrated to meet stringent power and measurement accuracy requirements. The 802.11 specification, however, allows device implementations with a wide range of capabilities. While the requirement for every device to support all PPDU formats has not been determined, every device must process the preamble for all transmission modes. 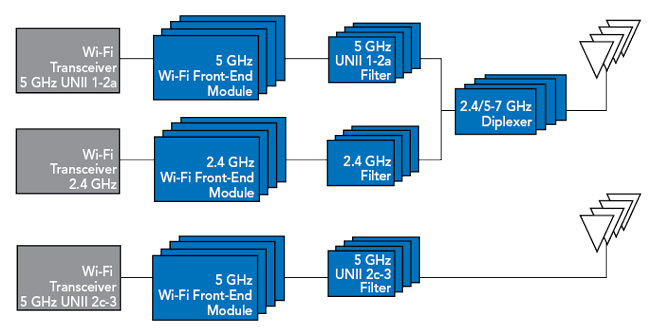 A new tri-band architecture is used in Wi-Fi 6 designs (see Figure 2). The design requires advanced filtering to split the 5 and 2.4 GHz streams, which are divided into sets of three. Duplexing is necessary to reuse the advanced capabilities of the antennas to support the transmission of 2.4 and 5 GHz. The new architecture uses thermal efficiency isolation to compensate for the close spacing of active and passive components on the PCB, with advanced packaging required to maximize the thermal conductivity and minimize size.

With the adoption of the Wi-Fi 6E (Extended) standard, the Wi-Fi Alliance expanded the spectrum to 7.125 GHz, enabling the 6 GHz band to also be used for unlicensed Wi-Fi operation. In conjunction with the tri-band architecture, Wi-Fi 6E establishes dedicated client communications and backhaul spectrum. Because of this, there is no longer a need to split the 5 GHz spectrum. The 6 GHz band can be dedicated to backhaul, creating an almost greenfield environment; i.e., it does not have to be compatible with legacy standards.

The technology improvements of Wi-Fi 6 do more than enhance performance; they change the way products must be verified and the configuration of test systems. Instruments must measure to tighter parameters with tests performed OTA. New test items and complex measurement methods are being added to the IEEE 802.11ax standard, with the antenna as a key evaluation element for the 6 GHz band, because the antenna performance requirements change with frequency.

The European Telecommunications Standards Institute (ETSI) originally specified using a spectrum analyzer to conduct key performance measurements such as output power, spurious and occupied bandwidth. New specifications (ETSI EN 300.238 for 2.4 GHz and ETSI EN 301.893 for 5 GHz) require a Wi-Fi call box in the test system for regulatory testing to support the receiver blocking test. This test configuration is superior to using a non-signaling tester or AP to control the minimum data rate. The earlier approaches make it more complicated to control devices designed with several chipsets to the minimum data rate, because proprietary software is required for each chipset.

In addition to regulatory testing, mobile operators require power level tests during call connection to ensure there is no excessive output power that can lead to a disconnect. As this can occur in some cases, a useful capability is to measure transmit (Tx) power before call connection to find devices with excessive output power not caught by the IEEE procedure (see Figure 3).

The 802.11ax standard specifies Tx and Rx tests. Among them are the HE TB PPDU format Tx test using the OFDMA method and evaluation of 1024 QAM modulation. Tx power, received signal strength indicator (RSSI) measurement accuracy and carrier frequency offset error tests are also important. Rx tests are also required because performance varies with conditions such as frequency and modulation method. These include:

Modulation Accuracy — User equipment performance is affected as the modulation method changes at each data rate. Two measurements are used to characterize modulation accuracy: Tx local oscillator (LO) leakage and error vector magnitude (EVM). Tx LO leakage measures the amount of energy leaking and appearing at the RF LO frequency. Too much power leakage may lead to poor demodulator performance. Further, if the power level is too high, a receiver may falsely trigger on the signal. For 802.11ax, the specification requires the power to be measured at the location of the RF LO using a resolution bandwidth of 78.125 kHz. The measured power should not exceed the greater of -20 dBm or the Tx power per antenna, in dBm, minus 32 dB.

Because Wi-Fi 6 uses 1024 QAM, EVM requirements are tighter. The requirements for HE SU, HE_EXT_SU and HE MU PPDUs for modulation and coding schemes (MCS) 0 to 9 are the same as in 802.11ac. For the new MCS 10 and 11, the EVM requirement is -35 dB if amplitude drift compensation is enabled in the test equipment and -32 dB if amplitude drift compensation is disabled. The 802.11ax EVM calculation uses compensation of estimated frequency offset and sampling offset drift; this differs from 802.11ac, which only compensates for frequency offset. The different requirement is due to the much longer symbol times in 802.11ax, which can lead to a larger timing drift and intercarrier interference (ICI). For HE TB PPDU, the EVM requirements must account for multiple stations (STA) transmitting simultaneously. The AP will integrate noise from multiple sources as total cumulative noise, and network performance will degrade if the noise is too large. In addition, a STA unintentionally transmitting power outside of its allocated resource unit (RU) will degrade the EVM of other STAs. 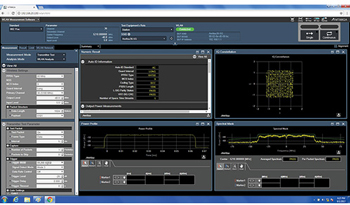 Power Adjustment — Referred to as pre-correction, this measurement tests the respective total values of the RSSI and absolute Tx power measurement accuracies, performed by displaying the difference between the TargetRSSI set by the user and the actual device under test (DUT) signal received by the test set.

Support for the 6 GHz band in the 802.11ax standard requires antenna performance evaluation using OTA tests. Test systems must have wide dynamic range when conducting Wi-Fi 6 OTA measurements to maintain connectivity over a radiated connection, i.e., sufficient to overcome the large path losses— which can easily reach 50 dB—from the Wi-Fi device through the anechoic chamber, antenna and cables, back to the test system. With a null in the antenna pattern being measured OTA, the connection can drop, with nulls unable to be measured without sufficient dynamic range.

Cellular/Wi-Fi equipment suppliers require OTA tests in an anechoic chamber, in accordance with CTIA/WFA Converged Wireless Group. Version 2.1 specifies OTA environment test items such as Wi-Fi total radiated measurements including total radiated power and total isotropic sensitivity, which require setting multiple data rates for each frequency band to analyze the power of the radio waves received by the DUT in all directions (see Figure 5). Cellular and Wi-Fi desense measurements must also be conducted OTA. Wi-Fi desense measurements assess any deterioration in Wi-Fi reception while the DUT performs cellular communications. Correspondingly, cellular desense measurements are conducted with the Wi-Fi transmitter on to determine any degradation in cellular reception.

OTA tests are also conducted to verify use case performance. These tests simulate the behavior in the field and are performed with a reverberation chamber to consider the influence of a real environment containing fading and multipath. Simulating the effect of a human hand, head or body shielding the antenna of a smartphone is one example. Another is testing the connection of an AP antenna despite an interfering signal or when the data rate changes during a connection.

Preferably, the test set will capture the packets communicating with a DUT, which provides more confident results than the alternative method of integrating a sniffer tool into the measurement environment. Packets are often missed by a sniffer, resulting in improper analysis and adding time to the test. Capturing the packets enables easier debugging of connection issues.

Spectral flatness measures whether the subcarriers have similar power by determining the average energy of a subcarrier range and verifying that no individual subcarrier’s energy exceeds a specified value. The 802.11ax spectral flatness measurement is made using BPSK modulated OFDM subcarriers, with the test signal containing at least 20 PPDUs, each with at least 16 data symbols. Unoccupied subcarriers are ignored during testing and averaging. In addition, RU power boosting and beamforming is not used during the test.

The minimum input sensitivity test verifies the receiver successfully demodulates a signal at a minimum input level with a packet error rate less than 10 percent. For 802.11ax, the minimum input sensitivity depends on the modulation, coding rate and bandwidth. For this test, the 802.11ax packets should be HE SU PPDUs that are 4096 bytes long with an 800 ns guard interval. Binary convolutional coding is used if the PPDU bandwidth is 20 MHz, and low-density parity-check is used when the bandwidth is greater than 20 MHz.

IEEE 802.11ax was designed to support the overall increase in Wi-Fi traffic, particularly streaming video, and is a strong complement to 5G. Testing of Wi-Fi 6/6E devices requires test solutions able to conduct measurements with tighter parameters and capable of OTA testing.