Two multi-modulus programmable frequency dividers (MMPFDs) with improved performance consist of eight stages of emitter-coupled logic (ECL) dual-modulus prescalers (divide by 2/3 cell). One prescaler is constructed with four master-slave D flip-flops (MS-DFFs) and three OR gates, another uses two MS-DFFs and one XOR gate. To further increase the operating frequency while reducing power consumption, the MS-DFF is modified: the hold circuits and sample circuits are controlled by the same input clock signal so that a single power supply can be used, reducing power consumption. Two frequency divider prototypes were built in 2 μm GaAs HBT technology for verification. Measured results show that the two frequency dividers can operate over a very wide frequency range - 50 MHz to 5 GHz and 50 MHz to 8 GHz, respectively - and their division ratios are 256 to 511 with a unit step increment.

Most employ Si bulk technology because dividers using this technology are easy to be implemented and have lower power consumption. However, relatively high substrate losses resulting in low-quality factors and noise, such as low frequency flicker noise, restricts use of silicon in applications with demanding high frequency performance requirements. For these applications, compound semiconductors such as InGaP, GaAs and GaN are attractive alternatives; however, MMPFD based on compound semiconductor processes remain difficult to implement due to high-power consumption and the large amount of circuit area required.

In this work, two MMPFDs were designed and implemented using a 2 μm GaAs HBTs process technology. Simulation shows a power reduction of more than 180 and 240 percent, respectively, compared to reported traditional dual-modulus divide by 2/3 prescalers. A considerable decrease in die area was also achieved. To our knowledge, these are the first reported MMPFDs with such a wide operational frequency range and range of division ratios using GaAs HBT technology.

A popular method for PLL realization is hybrid integration, in which the voltage-controlled oscillator is implemented by a compound semiconductor process and the other circuits - the frequency divider and phase frequency detector - are implemented in silicon (CMOS or SiGe). For a fully integrated PLL, nearly all are realized in silicon. Silicon-based frequency dividers are easily fabricated using available foundries and can be integrated with high speed digital and mixed-signal circuits to facilitate system interface designs. Thus, academic and industrial applications are more inclined to use silicon dividers for on-chip system compatibility, ease of integration and low-power consumption; however, the multi-modulus frequency divider still remains difficult to integrate in the same process, since area overhead and power consumption is huge.

A variety of structures and methods have been proposed to realize the 2/3 divider cell, including a commonly used structure1-5 containing four D-latches and three AND gates (see Figure 1). However, these logic circuits AND gates increase propagation delay, resulting in a lower operating frequency. Also, the latch output is not stable. During the update phase, any input change will be passed to the output, and the transition of the latch output is not synchronized to the edge. The 2/3 divider cell divides the input frequency by 2 or 3 as determined by the control inputs to Modin and PB. The output frequency is half of the input frequency except when Modin = 0 and PB = 0; then, the output frequency is 1/3 the input frequency. Because of the power consumption and die area for a traditional 2/3 divider cell, it is not suitable for a multi-modulus programmable frequency divider with a wide range of division ratios. 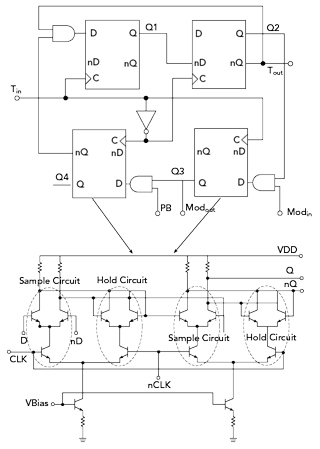 To realize a multi-modulus programmable frequency divider for high frequencies with large division ratios and relatively low-power consumption, some improvements are needed in the structures of the dual-modulus prescaler (i.e., the 2/3 divider cell) and MS-DFF. Figure 2 shows the elementary structure of a frequency divider that consists of eight stages of dual-modulus divide by 2/3 prescalers. The 2/3 divider cell comprises four MS-DFFs and three OR gates (see Figure 3a). The D flip-flops use synchronous ECL D-latches due to their high operating frequencies. In contrast with traditional structures,1-4 the propagation delay is reduced to yield a higher operating frequency and lower power consumption.

where Tout and Tin represent the output and input periods, respectively, and PB0, PB1, … PBn-2, PBn-1 represent the control bits of the MMPFD given to the cells, as shown in Figure 1. 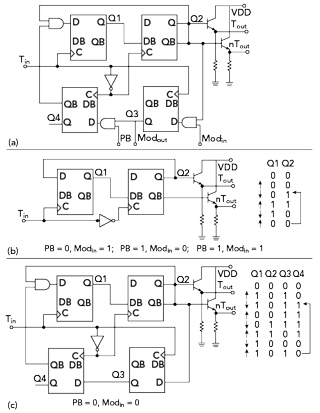 Figure 3 MMPFD-1 2/3 divider cell (a) and simplified configuration and state diagram when set to divide by 2 (b) or divide by 3 (c). 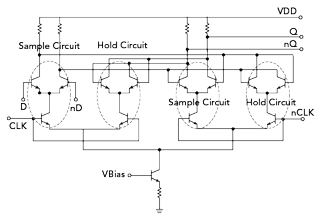 Figure 4 Sample and hold circuits of the MS-DFF. 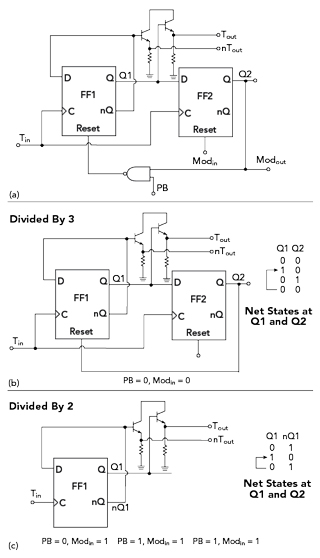 Figure 5 MMPFD-2 2/3 divider cell (a) and simplified configuration and state diagram when set to divide by 3 (b) or divide by 2 (c).

The frequency dividers were implemented in a 2 μm GaAs HBT process (see Figure 6) and measured with an oscilloscope for verification (see Figure 7). Without bonding pads, the core areas of MMPFD-1 and MMPFD-2 are 0.56 × 4.4 mm and 0.52 × 2.91 mm, respectively. MMPFD-1 draws 175 mA current with a 5 V supply, while MMPFD-2 only draws 112 mA. Figure 7a shows representative output waveforms from each divider. As shown in Figure 8, compared with the traditional prescaler and operating at the same frequencies, the power dissipation of MMPFD-1 is reduced by up to 180 percent while the power dissipation of MMPFD-2 is reduced by 240 percent, and a more compact die is possible. 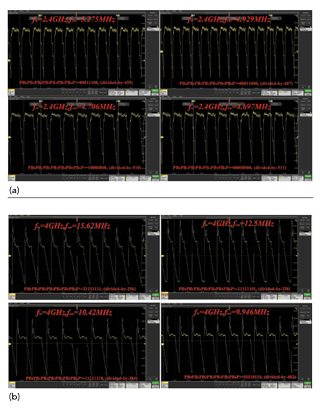 Figure 7 Representative output waveforms from the MMPFD-1 (a) and MMPFD-2 (b). 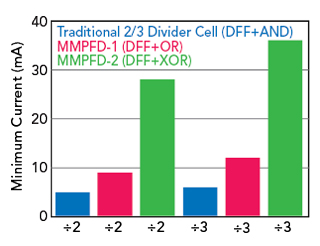 Table 1 compares this work with other published work when this article was written. In general, frequency dividers designed in Si bulk technologies (i.e., CMOS and BiCMOS)1,2,6 have lower DC power dissipation, but technology shortcomings may eliminate them from use in applications needing very low phase noise and radiation resistance. Compared to some reported frequency dividers using compound semiconductor processes,7-10 these MMPFDs achieve the widest division ratios and they have the largest bandwidths compared with other reported dividers. 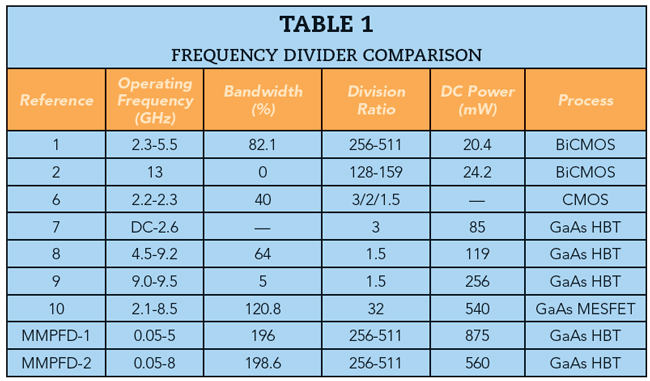 Two MMPFDs based on 2 μm GaAs HBT technology demonstrated a wide division range with the divide ratio varying continuously from 256 to 511. The MS flip-flop used to construct the 2/3 divider cell was modified so that it is supplied by a single tail current source. As a result, the GaAs HBT structure consumes less power and is more compact. It may be employed in fully integrated PLL applications such as fractional-N frequency synthesizers and agile frequency synthesized sources.