Holographic radar is not constrained by the sampling nature of scanning radar and so (loosely) has the capability to provide information with higher dimensionality. Fundamentally, staring radars meet the requirements of the Electromagnetic Uniqueness Theorem and provide an analytical solution to all electromagnetic interactions within their coverage. Conversely, scanning radars heavily under-sample so they cannot meet the same criteria. Some further benefits of staring radar are 1) the capability to provide very high Doppler frequency resolution by observation over dwell times unconstrained by the scan pattern or surveillance constraints and 2) contiguous measurement with high update rates, so fleeting, rapidly varying or complex returns can be sensed.

These characteristics enable high-resolution clutter rejection (i.e., detection in the presence of complex background environments of complex target returns) and optimized recognition and tracking. The efficacy of staring operation has been demonstrated with both modeled and real targets and clutter, on both large and small scales and in different applications.

As a basic example, consider detection of a complex maneuvering target. A scanning radar with a 2-degree azimuth beamwidth might detect and report its position every second, with a Doppler frequency resolution of 200 Hz. A holographic radar, however, can divide its radar return into 2 Hz wide components, for retaining and reporting a fine-grain Doppler signature, and fully sample its varying position and velocity, to rapidly determine changes in trajectory for effective tracking and threat assessment. As such, holographic radars provide both highly flexible radar coverage and utility, offering a solution to provide ubiquitous radar sensing - the ultimate in flexibility. 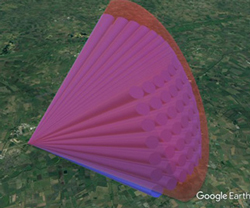 Fundamentally, the architecture of a holographic radar comprises a transmitter that constantly transmits over the entire field of view and an array receiver with a persistent mesh of narrow beams that fill the field of view, negating the need to scan to provide accurate angular measurements (see Figure 1). As a design consequence, the transmitter and the receiver units do not share a common aperture or common RF modules, since a broad transmit pattern is not efficiently produced by the type of multibeam array antenna required by the receiver. Such separation of the transmit and receive circuitry reduces their respective complexities (see Figure 2). The transmit antenna is usually a simple fixed planar array or a reflector antenna, and the receiver array is significantly simplified, since it does not contain high-power RF circuitry or complex transmit-receive switching elements.

Although staring radars have simplified RF, IF and control hardware and contain no moving parts, the consequence is increased processing complexity. The number of simultaneously processed beams is significantly increased. For example, a scanning radar typically processes only one beam at a time, while a staring radar processes many beams simultaneously. Also, the quantity of data processed in a single dwell is generally higher, to provide similar sensitivity to an equivalent scanning radar - since a scanning radar contains a high gain antenna on both transmit and receive - and to realize the benefits of a staring radar, such as high-resolution Doppler processing. Note, for example, the processing load of a fast Fourier transform, which is commonly used in radar signal processors, has an order greater than one with increasing length. 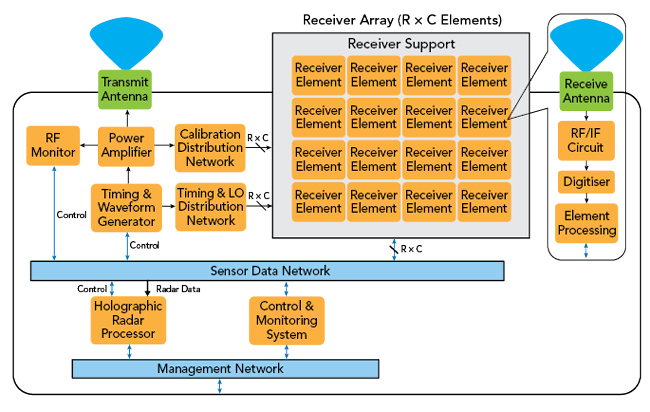 Staring radars tend to be smart, adaptable and defined by software. Furthermore, due to sensor persistence, staring radars are ideally suited to operate with multiple coincident modes in multiple, software-defined processing chains and/or cognitive processes. 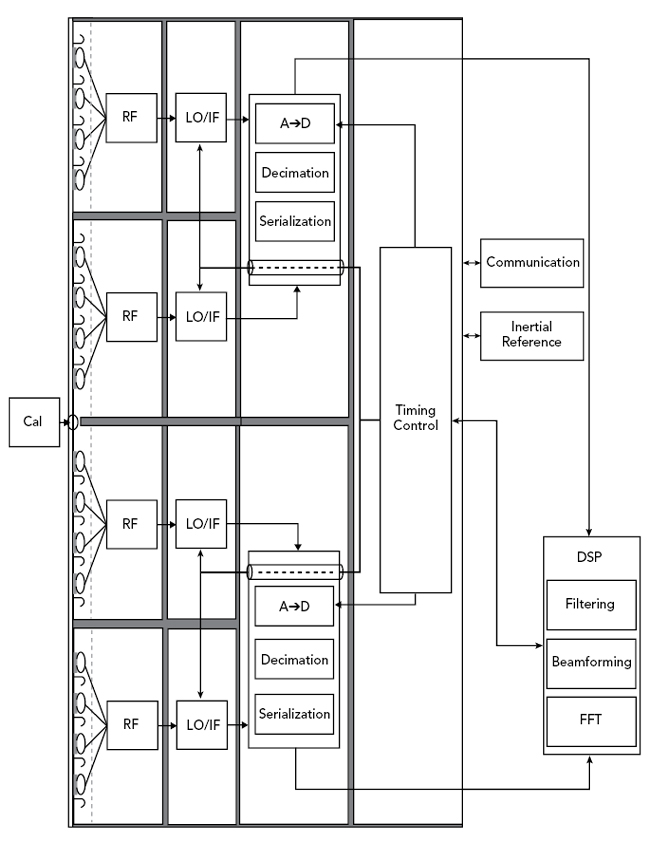 The radar hardware is designed to be re-used for multiple applications and units that can be reconfigured (see Figure 3). This design ethos results in numerous atypical radar design features, including: 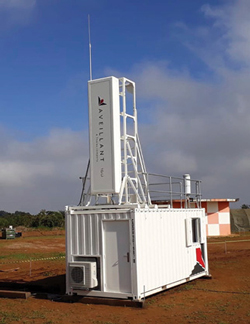 The original concept for holographic radar was as a C-Band demonstrator for a defense application. Successful proof of that concept led to the development of a long-range holographic radar for the civilian market, to address windfarm mitigation in air traffic management systems. Given existing air traffic control radar standards and long-range requirements for this application, L-Band was selected for its frequency of operation. From this early work, the Theia radar family1 was developed to address a range of applications, from land-based windfarm mitigation to longer range systems covering off-shore windfarms. With operational systems in continuous use for over five years, Theia is a good example of the expandable modular architecture in practice.

This modular architecture formed the foundation for developing a new concept radar with a conformal antenna, to investigate the efficient implementation of a staring array comprising 12 interdependent planar arrays for 360-degree azimuthal coverage. A demonstrator radar system, developed to explore this concept, contained four planar arrays, each with 128 receiver elements and sufficient transmit power to achieve 54 nautical mile detection of passenger aircraft. This four array demonstrator, nicknamed the Quad, was the basis for developing further ubiquitous radar sensing concepts and applications, including detecting drones. The initial investigations indicated the technology can support flight safety requirements: long-range detection, tracking and recognition of drones. A new product, named Gamekeeper, was rapidly developed to meet the needs of this emerging market, marking the coming of age of holographic radar (see Figure 4).

Radar is the only sensor capable of providing the essential sensing requirements for a drone surveillance and counter-UAV system: long-range, all weather performance; non-cooperative/autonomous drone detection and recognition; and consistent accuracy, coverage and performance. Market requirements for such a system are very demanding. They include: a high power-aperture product capable of detecting very low radar cross section (RCS) objects up to 7.5 km range; high dynamic range for detecting very low RCS objects in the presence of high clutter; high elevation accuracy for effectively discriminating air targets from ground objects; and high confidence tracking and recognition, to reduce the burden on operators given “confuser” targets in environments of interest. Normally, these requirements can only be met by large, high cost military radar systems, such as weapons locating radars.

Aveillant has addressed these market needs with a system more compatible with the civilian market. An initial operational capability for early adopters was developed for operational deployments in 100 days, by reconfiguring standard transmit and receive modules and commercial off-the-shelf (COTS) components used across Aveillant’s product line (see Figure 5). Gamekeeper radar’s capability has continuously evolved since its first operational deployment, with performance, stability and operational improvements released regularly, often multiple times per year, predominantly through software upgrades. These upgrades use a combination of adaptive agile development methodologies and the design features of holographic radar that make it a software-defined radar. This enables rapid technology insertion; in some cases, low technology readiness level techniques and technologies have been matured and implemented in the Gamekeeper radar to provide both step changes and continual improvements in capabilities. 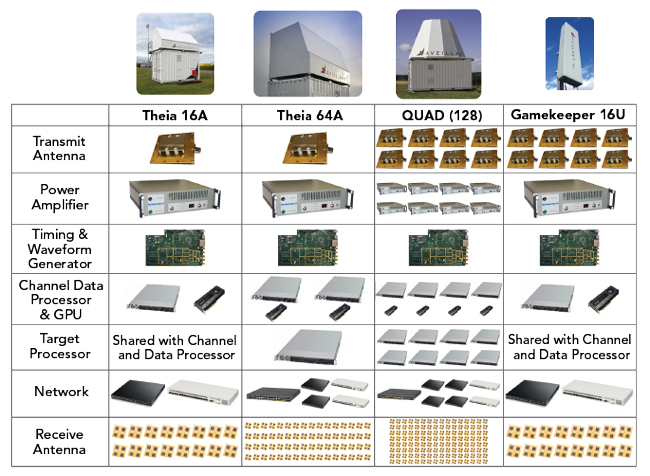 Figure 5 Radar family based on the reconfigurable design approach.

Key enablers for this adaptivity include advanced pulsed waveform control and state-of-the-art processors. Advanced pulsed waveform control is essential, given that the electromagnetic spectrum is congested, particularly in areas around airports and urban areas. Thus, radar transmissions, particularly those providing new capabilities, are highly controlled. This objective is more easily achieved using a staring radar architecture, versus other array antenna architectures, as the staring radar contains just one independent, easily accessible transmit channel. Transmitter and waveform control properties include:

The use of state-of-the-art processors has enabled significant developments unbounded by the limitations of processing performance. Key aspects of the processing architecture include:

Examples of further development include: 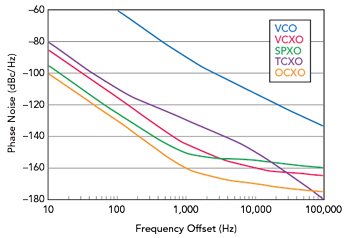 Like the challenges offered by the proliferation of windfarms and drones in the medium- to long-term future, concepts of modular staring radar architectures will be adaptable to emerging sensor needs. In the shorter term, the development of variants with extended coverage, higher power and higher sensitivity against drones are planned. System developments will improve discrimination and overall installed performance, which are essential to reducing the operator burden of security systems. Development plans include implementing concepts such as deep learning, adaptive cognitive techniques and frequency and polarization diversity.

Holographic radar is integral to the development of non-cooperative sensing concepts for unmanned traffic management systems, which will enable drones to operate safely in the lower airspace environment, unlocking their potential. Initial concept development and experimentation has begun as part of the National Beyond visual line of sight Experimentation Corridor initiative. This will grow to meet future needs for ubiquitous sensing, broad area and localized generic sensing for applications ranging from security to environmental monitoring. This need to improve coverage while maintaining accuracy is unlikely to be met by increased radar power and sensitivity, rather by sensor proliferation. In the near future, multi-site and multi-static holographic radar (polygraphic) operation is inevitable.