Understanding and Evaluating the Dynamic Range of Spectrum Analyzers

One of the most important aspects in choosing an electronic measurement instrument is dynamic range; however, it is generally not enough to simply compare parameters stated in data sheets. The following discussion explains the relationships among parameters to help understand and evaluate spectrum analyzer dynamic range specifications. 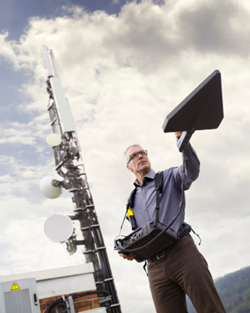 Figure 1 Identifying weak interfering signals in the presence of high signal levels from nearby transmitters.

When monitoring mobile phone interference in urban areas (see Figure 1), test engineers are frequently faced with the problem that the interference signals are weak, often below the noise floor of the measuring instrument, such as a spectrum analyzer. In such situations, greater sensitivity is typically achieved by reducing the input attenuation, resolution bandwidth (RBW) and reference levels and by using a preamplifier. In this way, the noise floor of the instrument is lowered to a level where the interference signals are visible. The disadvantage of this approach is that the instrument’s immunity to stronger signals in the vicinity is reduced. Strong signals may drive devices in the signal chain to operate in nonlinear regions, generating unwanted artifacts such as harmonics, intermodulation products and interference. Artifacts such as second harmonics, which occur at twice the frequency of the input signals, will appear in the spectral display the same as actual signals in the vicinity, and they can be mistaken for interfering transmitters in the radio network (see Figure 2).

The term high dynamic range (HDR) used for spectrum analyzers and radio receivers refers to the ability of the instrument to reliably record small signal levels, such as those from a mobile phone, in the presence of much larger signals. To use an acoustic analogy, this is like a high quality microphone’s ability to pick up the fine tones of a flute without significant loss when the flute is played adjacent to an operating jackhammer. This requires a balance between high sensitivity for small level signals and simultaneous immunity to saturation from large signals.

Figure 2 Receiver nonlinearity may create spurs that appear as real signals, in this case harmonics around 1,800 MHz.

While HDR is important for error-free measurements, spectrum analyzer dynamic range is not a rigid criterion. It can change according to the level of the required signal or signals and the measurement settings of the instrument. For this reason, one must consider at least two types of unwanted artifacts from nonlinearity: harmonics and intermodulation.

Harmonics - Second-order harmonics, for example, occur at twice the frequency of the input signal. Higher-order (i.e., nth-order) harmonics occur at n times the frequency of the input. In contrast with intermodulation, they occur when only a single signal is present, particularly when RF components in the instrument, such as amplifiers and mixers, are driven beyond their linear ranges with increasing power level.

Considering the dynamic range of an instrument, the input attenuation plays a prominent role determining the so-called intercept points, defined as follows:

The values for IP2/SOI, SHI, IP3/TOI and THI automatically change with the input attenuation of the instrument. To accurately and meaningfully compare the data sheet values of various instruments, the specified dynamic range or the corresponding parameters for immunity and sensitivity should be based on the same system settings. Typically, the intercept points are specified with an input attenuation of 0 dB. In all other cases, the values for IP2/SOI, SHI, IP3/TOI and THI must be reduced by the attenuation for the values to be compared.

The other intercept points are defined similarly, i.e., IP2/SOI, SHI and THI. SHI is an informative indicator of an instrument’s dynamic range when making a high sensitivity measurement of weak signals in the presence of a single strong signal that generates harmonics in the instrument. When the instrument is saturated by a single signal, only the harmonics of the signal are produced. Where the intermodulation is caused by the presence of two or more input signals of comparable amplitudes, the THI is more relevant.

The intercept points depend on the selected system settings, whether second- or third-order harmonics or intermodulation. Again, when comparing instrument performance, the settings should be the same. It is customary to specify intercept points based on the highest system sensitivity, i.e., at the lowest settings for the input attenuation and reference level. Most companies specify the IP2 and IP3 as typical values.

Intercept points are one of two quantities important to determining an instrument’s IMFDR. The other is the displayed average noise level (DANL). The intrinsic noise of an instrument determines the lower limit of measurement, i.e., the sensitivity of the measuring system. The lower the noise floor, the greater the dynamic range. DANL depends on the RBW setting, the system sensitivity or noise figure (NF) and thermal noise. For spectrum analyzers and receivers, -174 dBm, the level of thermal noise, is the physical lower limit of noise power at 300 K, although it can be reduced by cooling the hardware.

When evaluating dynamic range, the DANL or NF should be determined using the same instrument settings used for IP2 and IP3. Any preamplifier connected to the instrument must be inactivated. Although better NFs can be achieved using a preamplifier, the IP2 and IP3 will be degraded. The DANL is generally specified in data sheets as a guaranteed value. 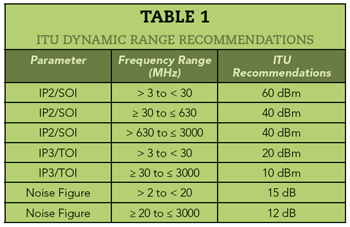 The International Telecommunication Union (ITU) has issued a guideline to better assess dynamic range. The recommendations in the ITU Handbook of Spectrum Monitoring do not refer specifically to spectrum analyzers, rather more generally to monitoring receivers and radio direction finders. In addition to establishing methods to determine dynamic range parameters such as IP3 and NF, the ITU specifies absolute values for different frequency ranges.

As well as the ITU’s numerical recommendations, presented as values in a table (see Table 1), a graphical representation of the parameters can show dynamic range in a way that makes the relationships easier to understand and enable quick and easy performance comparisons. Figure 3 shows a triangle constructed from the values of DANL, IP2 and IP3, where the area of the triangle represents the dynamic range. Increasing the area of the triangle corresponds to greater dynamic range. The values shown in the figure correspond to the ITU recommendations for the frequency range from 20 MHz to 3 GHz: a NF of 12 dB, an IP2 of 40 dBm and an IP3 of 10 dBm. 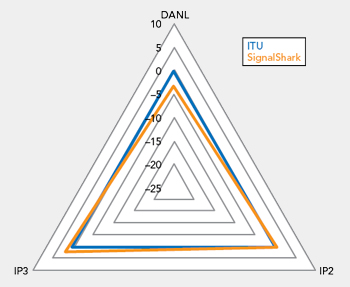 The performance of a spectrum analyzer, monitoring receiver or radio direction finder reflects no single component in the signal processing path, rather the combination of all the components in the signal chain, including the analog-to-digital converter and the signal processing architecture of the RF front-end. To improve dynamic range, receivers often include preselectors or filter banks to suppress frequency ranges that may overload the front-end and degrade performance. Using low noise preamplifiers and minimizing the noise of the first mixer stage help set a low intrinsic noise floor of the receiver.