Just last week, 3GPP completed 5G NR Release 16 — the second 5G standard that will greatly expand the reach of 5G to new services, spectrum, and deployments. This is a major milestone for the entire mobile and broader vertical ecosystem, as this new set of 5G specifications unlocks many new 5G opportunities beyond the traditional mobile broadband services. Release 16 not only continues to enhance the solid Release 15 technology foundation to bring better 5G system performance and efficiency, it also delivers key technologies for transforming new industries. For this blog post, I will provide a short summary of the different projects that were completed as part of this new 5G standard.

Enhanced ultra-reliable, low-latency communication (eURLLC)
In order to address new vertical use cases such as factory automation, Release 16 is enhancing the 5G URLLC foundation to deliver even better link reliability (up to 99.9999%). For these use cases, simply increasing the number of re-transmissions is insufficient, as there is usually also a stringent latency bound. Among others, one key technology to overcome this system challenge is coordinated multi-point (CoMP). It utilizes multi-TRP to introduce redundant communication paths with spatial diversity, so even when a path is temporarily blocked, the communication is uninterrupted by using the remaining paths. 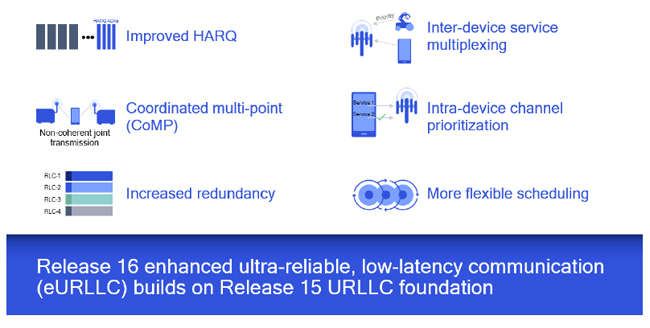 New power-saving features
Another foundational aspect that garnered a lot of interest is to further reduce device power consumption, so battery-powered devices can have extended battery life. In Release 16, several new power-saving features were introduced. For instance, a new wakeup signal (WUS) can let the device know if a transmission is pending or allowing it to stay in low-power mode, skipping the next low-power DRX (discontinuous reception) monitoring period. Others include optimized low-power settings, overhead reduction, and more efficient power control mechanisms.

Other foundational enhancements
The aforementioned areas are just a subset of the broad scope of Release 16 projects, there are many more that will further enhance the foundational aspects of the 5G system, including improvements in mobility management, spectrum aggregation, interference management, and device capability signaling. Release 16 also adds many new system capabilities like 2-step RACH, data collection, and VoNR circuit-switch fallback. For more details about these items, please join my webinar to learn more.

Expanding the reach of 5G
We envisioned 5G to be the unifying connectivity fabric for our hyper-connected future, and Release 16 pioneers the 5G expansion into new industries. It is the first 5G NR release that delivers system solutions for new use cases beyond mobile broadband. Let me highlight a few key projects below.

Non-public network (NPN)
The second Release 16 project that I want to highlight is the added support in the system architecture for private networks (called “non-public networks” or NPN, in 3GPP parlance). Private networks utilize dedicated resources (e.g., small cell base stations) that are independently managed, provide security and privacy that allow sensitive data to stay on-premise, and delivers optimizations for local applications (e.g., low latency). Private networks can benefit a wide range of new 5G deployments such as industrial IoT use cases.

Integrating 5G as a TSN bridge.

Cellular-vehicle-to-everything (C-V2X)
Utilizing 5G to enhance automotive safety is another focus area for Release 16. While Release 14 C-V2X introduced sidelink (V2V, V2I, V2P) to support basic safety use cases, Release 16 builds on Release 14/15 by introducing a NR-based sidelink that will enable new advanced safety use cases while also paving the path for autonomous driving. Release 16 supports reliable and efficient multicast communication based on HARQ feedback and uses distance as a new dimension at the physical layer, which enables “on-the-fly” multicast groups based on distance and applications.

High-precision device positioning
A major Release 16 project that expands the reach of 5G beyond providing connectivity is positioning. It established the baseline for 5G-based positioning, designed to meet the initial requirements of 3 meters indoor and 10 meters outdoor accuracy. Release 16 defined an array of both single- and multi-cell positioning techniques, comprised of roundtrip time (RTT), angle of arrival/departure (AoA/AoD), and time difference of arrival (TDOA). In addition, to support use cases in industrial IoT environments, it also defined new evaluation scenarios that support new indoor channel models. 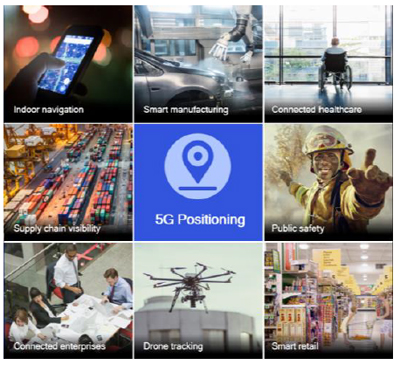 5G positioning will support a wide range of new vertical use cases.

What’s next?
We are just at the beginning of the 5G era, and there is plenty of work ahead of us before we can realize the full potential of 5G. Now that Release 16 is finally completed, we will be focusing on ramping up our Release 17 efforts. With the ongoing travel restrictions, much of the 3GPP standardization work will be done in online meetings. It won’t be easy, as our success is based on close collaboration and consensus across the ecosystem. It’s going to be a great challenge, but a welcoming one, and I am glad that our team is ready for it. Full steam ahead!