The automated test and measurement (ATE) landscape is rapidly changing, progressing beyond the capabilities of traditional bench-top and most legacy ATE systems. Varying and diverse performance requirements, testing speeds and frequencies used by modern cellular architectures (5G), Internet-of-Things (IoT) devices, and the latest feature dense systems-on-chip/systems-in-package (SoC/SiP) necessitate a different approach. This leverages a modular configuration focused on precise calibration, low loss device connections and high measurement accuracy with a small footprint and low capital expense. Modular architectures can provide future proof features and enable ATE systems to be faster and more accurate with less development. Not all modular ATE systems are created equal, however. At mmWave frequencies, test system configuration requires insight into the differentiating features between ATE systems as well as the bench-top units they typically replace.

Automated testing of mmWave devices has been subject to increasingly complex standards, methods and requirements over the past few years. This trend is likely to progress as fifth generation cellular mobility (5G), IoT, and system-on-chip (SoC) technologies continue to advance, leaving research and development and moving past engineering volumes to production.1 Current mmWave automated testing relies on dedicated test (bench-top) instruments or custom designed/developed ATE purpose-driven for a specific type of device, standard or set of specifications.

This is an era of rapid technology advancement, shifting standards, and the use of the upper-microwave and mmWave spectrum for mainstream applications (see Figure 1). It is unlikely that general purpose bench-top instruments or custom/application-specific ATE systems will be able to cope with the onslaught of new requirements. Hence, an engineering team selecting production test equipment must be mindful of current and future requirements. Organizations cannot risk purchasing capital equipment that may become rapidly obsolete or provide diminishing value due to complex setup and optimization requirements. There is a need for modular test systems that reach well into the mmWave frequency range, support multi-domain synchronized testing, have software-based configurability and can accommodate the shifting standards of modern cellular, Wi-Fi, IoT and other emerging technologies.

The emerging device trends responsible for the growth of mmWave production testing are: massive numbers of devices that operate at much higher frequencies (to nearly 100 GHz) with bandwidths reaching several hundred megahertz to a gigahertz, more complex and configurable RF devices with multiple RFICs, and testing scenarios that require simultaneous and synchronized mixed-domain (power, RF, analog and digital) measurements and signal generation. Initial 5G user equipment (UE) and customer premise equipment alone are capable of operating in all 4G bands, new 5G sub-6 GHz bands (FR1) and new 5G mmWave bands (FR2), which in the U.S. can include frequencies beyond 50 GHz (see Table 1). These are generally composed of highly integrated and tightly assembled digital, RF, analog and power devices, for which design and operation are dictated by standards that are prone to change over the next several years. 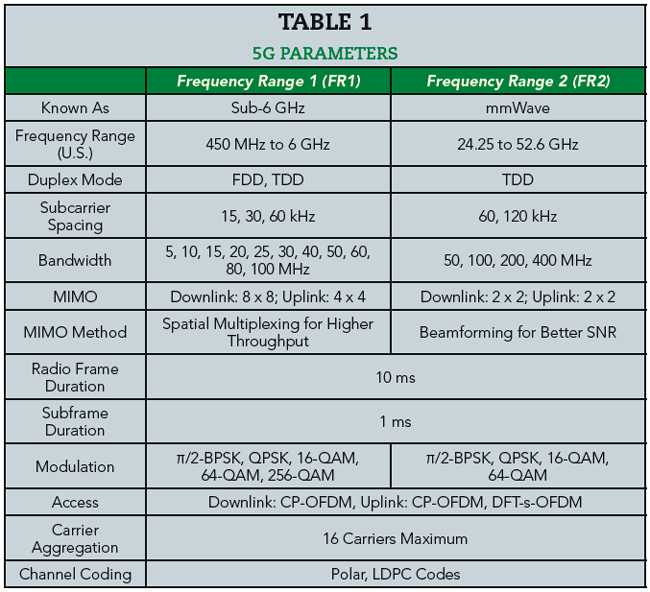 5G, as well as mmWave Wi-Fi (802.11ad), drive test complexity with other features such as multi-input multi-output (MIMO), beamforming and carrier aggregation (CA) that result in antenna systems capable of generating nearly infinite numbers of test cases and combinations of frequency bands (600+ carrier-aggregated combinations with 3GPP release 15).2 This poses challenges for R&D characterization, quality and verification testing where there is little room for lengthy and complex measurements in an industry that is continuously driving down the bottom line in the face of rising competition. To prevent negative reception of early 5G products and services, the telecom industry and UE device manufacturers must also be aware of the market’s low threshold for device failures, which underscores the need for rigorous testing and characterization.

The latest high throughput and high complexity SoCs/SiPs employ various styles of built-in-self test and test sequence automation to aid with chip-level testing and manufacturer verification. In some cases, these tests are performed rapidly, with some occurring within hundreds of microseconds. For RF test equipment to keep pace, equipment settling times must match or exceed these windows. Multi-domain testing, as well as direct circuit testing and over-the-air (OTA) testing must be done simultaneously with synchronized test equipment. For example, cellular handsets that have Wi-Fi, Bluetooth, 3G/4G/5G FR1 cellular and near field communications modules may require both OTA and direct circuit probing to test intersystem interference, which is compounded by new CA technologies where several cellular bands may be simultaneously used.

Wide dynamic range and frequency range OTA testing is also essential for characterizing and verifying MIMO/beamforming antenna systems. In the cases where each antenna element must be inspected, high dynamic range is necessary to determine the performance of each element, especially when some elements may exhibit much higher signal power levels than their defective neighbors. Discovering defective elements may be impossible without direct testing of each antenna element. For upcoming 64×64 MIMO 5G base station antenna systems, this testing may be impractical due to the time required, the cost and the setup complexity. To test large numbers of systems, test repeatability and optimization are crucial for 5G UE and base stations to be both economical and perform reliably in the field.

Until recently, the mmWave arena has been dominated by the government and military for radar and satellite communications with a small amount of commercial backhaul products. MmWave products have historically been high cost and low volume where hand testing with traditional bench equipment was acceptable (see Figure 2a). The high volume and low cost consumer market traditionally remained below 6 GHz. ATE systems evolved in the sub 6 GHz range to meet the fast, low cost test needs of consumer products. Now volume production is reaching into mmWaves and extending the need for fast low cost testing that maintains accuracy in frequencies where high accuracy has previously been impractical. 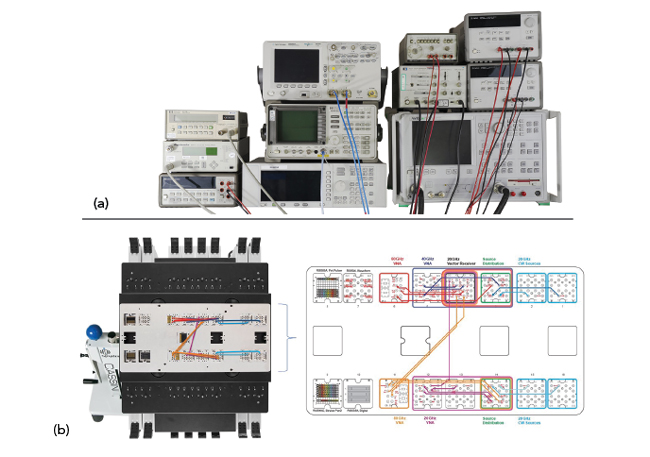 Figure 2 Legacy bench-top (a) and modular production (b) test systems.

Production ATE systems also generally offer much more granular control over the operation of the test equipment RF components, which only some bench-top units offer; and, the ones that do generally require custom setups. Given the stringent requirements of mmWave testing, it is conceivable to use approaches that have largely been ignored or undiscovered by mainstream test and measurement device manufacturers who have mostly focused on either large format all-in-one bench-top instruments or highly integrated and limited field portable test units.

As a result, there is a growing number of test equipment manufacturers building modular test equipment platforms designed with components that can be configured in a variety of ways to meet unique test needs (see Figure 2b). These are focused on sub-6 GHz technology to serve R&D, specialized and production test scenarios with low cost and configurability requirements. The general purpose modular test units often require customized setups and programming to build viable platforms and generally do not offer the same level of performance and reliability as traditional bench-top units.

There are many frequency dependent phenomena associated with RF testing, some of which become major test system design challenges at mmWave frequencies. Test systems that are not designed with these in mind may be much less accurate and may even yield misleading or inconsistent results at frequencies above several gigahertz. Some of these phenomena drive mechanical/electrical (physical) test system design, while others influence test system architectures.

At mmWave frequencies the conductivity of metals decreases as a function of frequency and the dielectric loss of insulators increases. Moreover, the much smaller wavelengths of mmWave signals interact with geometric features that exhibit minimal impact at lower frequencies. For example, a quarter-wavelength in air at 1 GHz is 75 mm, while at 80 GHz it is less than 1 mm; hence, interconnects that work adequately at lower frequencies do not scale to mmWave.

The result of these phenomena is greater insertion loss through transmission lines, greater attenuation in connectors, poorer match between interconnects and less tolerance to misalignment in the connections between transmission lines. This is why, in many cases, waveguide interconnects are necessary for mmWave applications, as losses and mismatches are considerably less in waveguide compared to coaxial transmission media. It is also important to minimize transmission line lengths by placing the ATE system as close to the device under test (DUT) as possible.

For the final few centimeters at mmWave frequencies microstrip/stripline transmission lines are often used with IC load boards. Waveguide, although superior electrically, can suffer from its own mechanical issues. It is rigid and has physically large interconnects. For example, the UG387/u flange typically used between 60 and 90 GHz has a diameter of almost 20 mm. Some devices can have up to 24 mmWave ports on a single component. Physically routing waveguide through the interface layer for 24 ports can represent an impossible task. Several manufacturers are creating custom small interface flanges to address the flange issue. Proprietary waveguide technology that is both thin-walled and conformable has also been developed that minimizes the routing challenges without sacrificing high frequency performance characteristics. Figure 2b illustrates a modular test system with a configurable mixed signal interface. Figure 3 is a close-up view of the mixed signal interconnects.

The frequency dependent degradation in performance that emerges at higher frequencies also impacts test system architecture and calibration. Testing accuracy depends on ensuring that the calibration plane is extended to the DUT plane, i.e. the behavior of the interconnects and associated parasitics are part of the test environment.3,4

In production there is always interface hardware between the test instrument and the DUT. This may be as simple as a cable or waveguide or might include multiple active components. For accurate measurements, the hardware must be calibrated. At lower frequencies, it is often acceptable to calibrate only to the instrument interface. At mmWave frequencies, however, it is extremely difficult to achieve acceptable test results without calibration to the DUT. This requires on-wafer or in-socket standards, typically open/short/load and a vector measurement system to effectively de-embed test results from the testing environment. 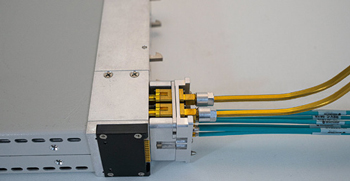 Fixturing is a major design consideration for most ATE systems and is much more critical at mmWave frequencies. In many cases, the fixture and interface cards that bridge the test equipment to the device must be custom designed for each device. This limits reusability and creates reliability and test issues by requiring a new interface card design for every DUT. Modular device interface cards and standardized modular fixturing designed with mmWave performance considerations provide better reusability of test system hardware as well as greater reliability and repeatability for high sensitivity measurements (see Figure 4). Moreover, calibration is easier, as a modular device interface can be included in calibration procedures without additional custom calibration. Hence, additional vector error calibration can be performed for both the fixture layer and device interface board layer enabling system-wide vector error calibration down to the device plane.

Other important considerations at mmWave frequencies are control capability, software support and test system optimization features. With rack and stack systems made from bench-top instruments, there may be very limited flexibility and programmability available to the user and interfacing with the ATE manufacturer may be necessary for even relatively minor changes. In other cases, completely generic hardware and software configurations leave the user with the burden of programming an ATE system test routine from scratch. A more modern and user-friendly approach is to provide an extensively featured graphical user interface that can allow the user flexible control while minimizing design complexity and the potential for user error. It is also beneficial for these systems to allow for custom programming to enable additional features and customization to meet the latest standards and conformance testing.

mmWave testing is moving from the laboratory to mainstream production. The test industry is now facing challenges posed by both the production environment and highly sensitive and stringent mmWave testing requirements. Modular ATE is likely the only test system solution that can economically deliver production-grade mmWave and mixed-domain testing. 5G, as it goes up in frequency, is one of the first big market sectors entering this space. It forces the ATE industry to face the test challenges in making 5G a reality; much of the ATE industry will be working in the greater than 26 GHz frequency space for the first time.