Ericsson just released their Mobility Report and here are some highlights. Taking information directly from the report, more than 50 service providers around the world have launched commercial 5G services. All of the South Korean service providers launched commercial 5G services at the beginning of April (GSA reported 1.5 million users in Korean). The initial focus for all three has been enhanced mobile broadband targeted at consumers, with immersive experiences based on virtual reality (VR), augmented reality (AR) and high-quality streaming.

On a global level, 5G network deployments are expected to ramp up during 2020, building the foundation for massive adoption of 5G subscriptions. Over the next six years, 5G subscription uptake is expected to be significantly faster than that of LTE, following its launch back in 2009. Key factors are the earlier engagement of China in 5G compared to LTE, for which the country was not one of the early markets to launch, as well as the earlier availability of devices.

LTE will remain the dominant mobile access technology by subscription during the forecast period. It is projected to peak in 2022 at 5.4 billion subscriptions and decline to around 4.8 billion subscriptions by the end of 2025 as LTE subscriptions migrate to 5G. Ericsson anticipates a slower decline for 2G (GSM/EDGE-only) subscriptions than previously estimated, particularly in the Middle East and Africa region. In part, this is due to the longer life cycles of 2G feature phones and the relatively higher cost of smartphones.

Interoperability testing of second-generation silicon is now underway in laboratories. With this generation, vendors are working to surpass first-generation launches with more integrated designs, reduced power consumption, and more frequencies and network operation modes. There has been considerable talk about cellular access cutting the cables for Industry 4.0. Commercial grade 5G modules for industrial use cases are expected with the launch of second-generation chipsets.

In 2020, Ericsson expects growth in the number of fixed wireless devices, with many vendors and models enabling 5G-connected households. Entering the volume market Annual shipments of 5G devices are projected to reach 13 million units by the end of 2019. 5G has outpaced LTE in the number of devices launched during its initial roll-out period. However, 2020 will be a different numbers game. 5G device volumes in 2020 are projected to reach 160 million units, with China expected to massively deploy 5G coverage. In addition, all major vendors will have released a 5G-capable device and a number of vendors are expected to have addressed mid-tier smartphone segments. SA/NSA/FDD/TDD all in play and co-existing

In 2020, a typical 5G smartphone will be a very smart device. As many 5G networks are being launched using 5G non-standalone (NSA), this mode will be supported on most new devices along with 5G standalone (SA) mode. In both modes, phones will support:

frequencies (as well as mid-band) In short, 5G is expected to gain scale in 2020, enabled by coverage roll-out and availability of devices. Unlike previous cellular radio access technologies, it appears 5G will not be constrained by a lack of user equipment. 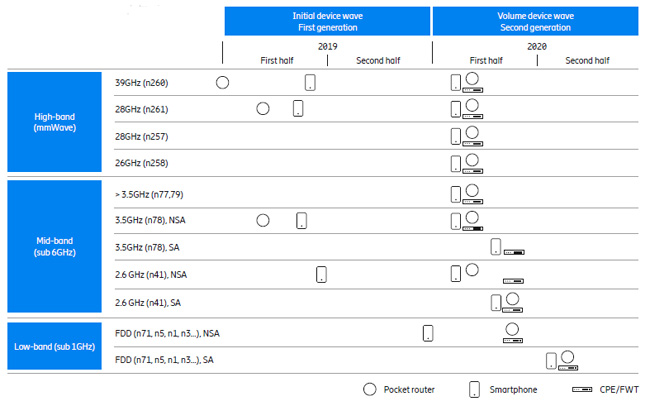 Global total mobile data traffic is expected to reach around 38 exabytes per month by the end of the year and is projected to grow by a factor of 4 to reach 160 exabytes per month in 2025. It represents the mobile data that over 6 billion people will consume using smartphones, laptops and a multitude of new devices 6 years from now. Smartphones continue to be at the epicenter of this development as they generate most of the mobile data traffic – more than 90 percent today and 95 percent projected in 2025. Populous markets that are early with 5G are likely to lead traffic growth over the forecast period. By 2025, we expect that 45 percent of total mobile data traffic will be carried by 5G networks. 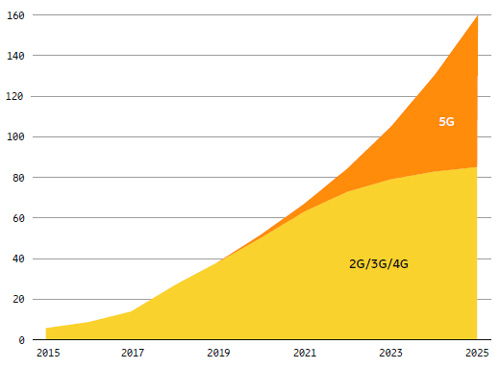 The Massive IoT technologies NB-IoT and Cat-M1 continue to be rolled out around the world. 2G and 3G connectivity still enable the majority of IoT applications, but during 2019 the number of Massive IoT connections are estimated to have increased by a factor of 3, reaching close to 100 million at the end of the year. Massive IoT primarily consists of wide-area use cases, connecting massive numbers of low-complexity, low-cost devices with long battery life and relatively low throughput. NB-IoT and Cat-M technologies complement each other, and many service providers are deploying both technologies. Out of the 114 service providers identified as having launched at least one of the NB-IoT or LTE-M technologies, close to 25 percent have launched both technologies. 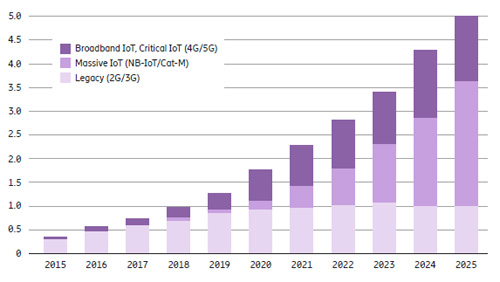