5G fixed wireless access (FWA) is likely to enhance network performance capabilities and deliver high-speed network coverage compared to currently used connectivity networks. With up to 100 times more capacity than 4G networks, 5G would enable cost-efficient FWA deployments on a massive scale. Using larger ranges of the radio spectrum to provide consumers with low latency connectivity (1ms) and significant capacity gains, the evolution of 5G is expected to take FWA to a new level. According to Sachin Garg, Associate Vice President, Semiconductor and Electronics at MarketsandMarkets, “the market potential for 5G FWA is massive, and it is poised to disrupt broadband internet connectivity over the next few years by fundamentally restructuring fronthaul networks. Although the technology is still in its early stages of development, telecommunication players have begun evaluating how they would harness telecom networks to generate business value and prepare for the new competitive realities that the technology would bring. The 5G FWA market is expected to grow from USD 0.4 billion in 2019 to USD 46.4 billion by 2026, growing at a CAGR of 97.5%.”

5G FWA - deliver services like fiber-based broadband & provide data speeds higher than current broadband
It is challenging to upgrade or deploy the foundation infrastructure in densely populated urban areas due to the high cost of projects in civil works and complexities associated with high-rise buildings. FWA could overcome the challenge by providing a wireless connection with high throughput and low latency everywhere, whether replacing aging wireline infrastructure or establishing a connection with a new network node. 5G FWA is expected to have a massive impact on developed countries, such as the US, the UK, Germany, and Japan where there is a sizeable disparity in broadband accessibility between major cities and sparsely populated rural areas.

The mobile industry has turned its head to find a new territory, and the most discussed “above 6 GHz band” for 5G today is 28 GHz, which has been permitted for use in the US and South Korea. The spectrum has emerged as the preferred band for the initial deployments of 5G-based FWA networks. Countries such as the US, the UK, South Korea, and Japan have announced their 5G spectrum strategies, indicating that the period during 2018–2020 is the right time for the deployment of 5G commercial systems, using mmWave bands.

Increasing demand for data services to drive 5G FWA market
FWA is the most cost-effective way of providing a broadband solution to customers compared to fiber connectivity. “The increased demand for data services is primarily driven by the growing use of consumer electronics and data-intensive applications such as virtual and augmented reality, 3D, and ultra-HD video. More bandwidth is required to support the increasing data traffic. 5G is expected to provide 1,000× more bandwidth than its predecessor broadband generations—3G and 4G. Therefore, the growing data traffic would force network operators to provide high-speed bandwidth to their consumers”, says Anand Shanker, Senior Analyst, Semiconductor and Electronics at MarketsandMarkets. In October 2018, Verizon launched a 5G FWA service in 4 US cities, namely, Houston, Indianapolis, Sacramento, and Los Angeles.

5G FWA to have major impact in semi-urban and rural areas
In semi-urban areas, the density of population is sparse and, by definition, remote from central offices. Hence, it requires significantly high investments to connect a subscriber with the network via wireline infrastructure. With high power transmission/reception and advanced antenna technologies, wireless links can effectively reach rural, outskirt areas without major construction work (i.e., only base stations and customer premise equipment need to be installed). In several situations, operators are required to provide temporary coverage in some areas of the country where there usually is very little or no demand; for example, a skiing resort in winter. FWA is a flexible, quick, and cost-effective solution to satisfy the rural/temporary requirement. 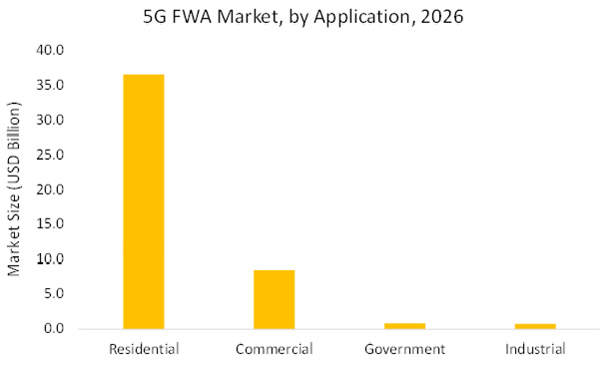 Currently, the focus of all major vendors in the 5G FWA market is to target residential customers, and over a three-fourth share of the total 5G FWA market is likely to be captured by residential users. 5G FWA is an ideal alternative mainly for residential customers as users can get gigabits of speeds at a competitive price, with no installation issues. Fixed wireless internet is one of the innovative solutions to connect homes and businesses in rural, remote, and hard-to-reach areas that lack access to internet services. A growing need for higher speed broadband networks opens the door for new players. With 5G FWA, the high cost of entry into the market would no longer be an obstacle for new entrants, and the technology could help to bridge the digital divide.