This article describes an approach to extend the bandwidth of power amplifiers (PA) designed using resistive-reactive series of continuous class F modes (SCFM). By introducing third harmonic loads to the resistive-reactive SCFM PA, the overlap between the fundamental and harmonic impedances is solved and the operating bandwidth extended. Using this approach, a 0.5 to 2.3 GHz high efficiency PA was designed, with experimental results achieving 10 W output power and 59 to 79 percent drain efficiency from 0.5 to 2.3 GHz.

In this article, an extended mathematical formula is applied to the resistive-reactive SCFM. The design space is further extended by introducing third harmonic impedances, providing more freedom when designing high efficiency multi-octave PAs.

The traditional resistive-reactive SCFM has a half-wave rectified sinusoidal current waveform, ids(θ), at the intrinsic current generator plane of the device:

The voltage waveform, vds (θ), is no longer rigorously restricted to a square waveform and includes a set of variations dependent on the parameters α and γ:

Resistive third harmonic impedances are introduced by multiplying the current waveform of the resistive-reactive SCFM by the factor (1+β cos θ), while the voltage waveform remains unchanged. The new current waveform is represented by: 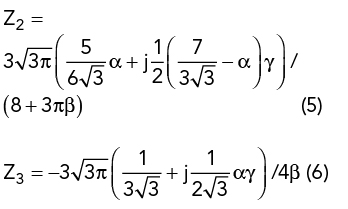 The feasibility of Z1, Z2 and Z3 depends on the conditions 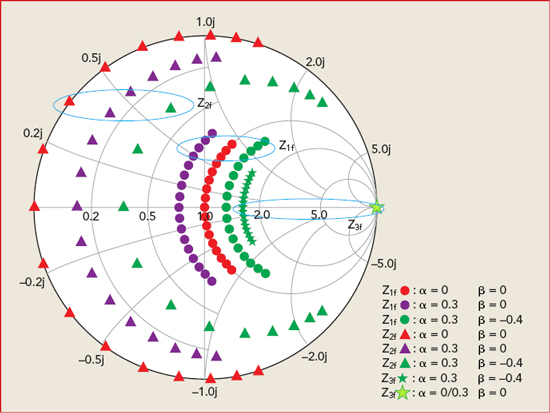 Figure 1 Fundamental and harmonic impedances vs. α and β.

Drain efficiency can be calculated from Equations 2 and 3 as:

Figure 2 Drain efficiency (a) and normalized output power (b) vs. α and β.

To verify the effectiveness of this approach, a 0.5 to 2.3 GHz resistive-reactive SCFM PA was designed using a Wolfspeed CGH40010F GaN transistor, operating at a quiescent drain bias of 28 V and of 68 mA, and a 30 mil thick Rogers 4350B substrate (εr = 3.66) with a conductor thickness of 35 μm.

A precise model of the parasitic network for the widely used CGH40010F transistor has been derived and reported by Tasker and Benedikt.12 Based on this parasitic network model, the impedance trajectories in the Smith chart at I-gen and at the package plane of the output matching network are shown in Figure 4. The derived fundamental impedances at the current plane across the operating band from 0.5 to 2.3 GHz are in or near the theoretic region. 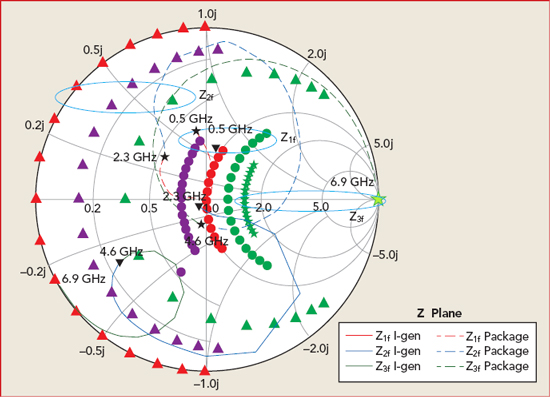 Figure 4 Fundamental and harmonic impedances at the I-gen and package planes.

The final design of the resistive-reactive SCFM PA is shown in Figure 5. Simulated and measured results with a CW input power of 29 dBm are shown in Figure 6. A drain efficiency of 59 to 79 percent and saturated output power of 39.4 to 41.6 dBm are achieved across the band from 0.5 to 2.3 GHz. The measured results are consistent with the simulations.

Figure 5 PA schematic (a) and prototype (b). 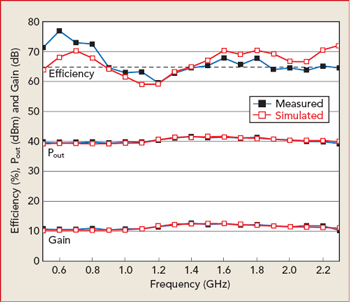 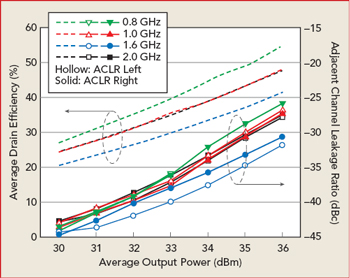 To characterize linearity, a 20 MHz LTE signal with a peak-to-average power ratio of about 7.5 dB was used to drive the PA at 0.8, 1, 1.6 and 2 GHz. As shown in Figure 7, the broadband PA exhibits good linearity at about 5 dB back-off power, where the adjacent channel leakage power ratio (ACLR) is lower than −30 dBc, with 34.1 to 49.1 percent average efficiency. Table 1 compares the performance of this PA with other similar state-of-the-art broadband PAs.

The resistive-reactive SCFM design space was extended by introducing the third harmonic impedance. Using this methodology, the overlap between the fundamental and harmonic impedances was effectively solved, and a broadband high efficiency PA was designed, built and tested. The agreement between simulation and measurement demonstrates the validity of this approach for a multi-octave, high efficiency PA. Driven by 20 MHz LTE signals, the ACLR of the proposed PA is lower than −30 dBc at approximately 35 dBm output power, with average drain efficiency higher than 34 percent. 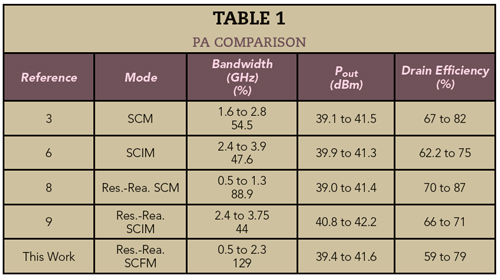