MWC19 – Barcelona Welcomes in the Era of 5G and Foldable Phones

The biggest hit at MWC19 was flexible display technology that was shown off in 2 foldable phones, the Samsung Galaxy Fold and Huawei Mate X, and in a wearable smartwatch phone from ZTE, the nubia Alpha. While 5G was everywhere (I don’t think I saw one booth that did not mention 5G), it is just emerging into the market but will certainly take off later this year. Nokia voiced this timing in their press conference saying that they expect the first half o 2019 to be somewhat slow with 5G taking off more quickly in the second half of this year.

To date, the major 5G networks announced were Verizon’s Fixed Wireless Access last Oct and AT&T mobile 5G service toward the end of the year in the US. Korea was also one of the first to turn on their 5G network although devices don’t seem to be available yet.  China is expected to launch in the first quarter this year while European deployments seem to be lagging. This was brought up constantly at MWC19 that the EU has been slow to allocate frequencies and authorize infrastructure sites which are putting Europe behind. The other major concern discussed constantly was security – how will 5G networks improve security especially for use cases that will rely on confidential enterprise transactions or ultra reliable life or dead applications like autonomous vehicles or remote surgery. 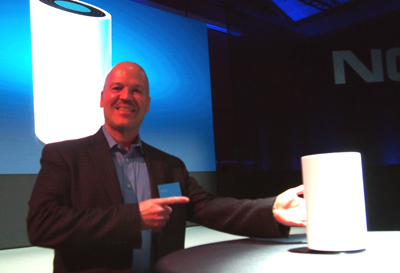 Nokia made the most noise of the network equipment manufacturers by introducing a Fixed Wireless Access device called the FastMile gateway which is a self-contained residential device that connects wirelessly to the 4G or 5G network while creating a better and faster Wi-Fi experience within the home. The 5G gateway supports 4G so consumers get the best possible service in the home by utilizing the best quality signals received. The unit offer speeds up to 1 Gb/s and is a stylish, self-install gateway.

Sub 6 GHz 5G technology is relatively straight forward now that the first standards are in place. The technologies needed to realize devices and systems are well understood and testing methods are established. The only major challenge left is to realize the cost, power and size constraints needed to meet the financial goals necessary to achieve success. However, mmWave 5G technology is still emerging including the test methods needed to verify devices and systems. We saw several interesting mmWave architectures being developed that will compete for their share of the market. There are the highly integrated silicon SoC approaches from companies like Anokiwave, Qualcomm, Xilinx and IDT, the flexible more discrete architectures that typically use silicon control devices and GaN or GaAs power amplifiers from companies like Qorvo, NXP and ADI plus a couple of other novel approaches such as the low loss Gapwaves waveguide antenna front end approach and the low cost Pivotal passive holographic beamforming approach. It will be interesting to see which technologies emerge as the winners in this market.

It was an exciting year at MWC19 with crowds that should have exceeded last years’ record attendance as the first year of 5G starts and flexible screens launch foldable and wrap around, wrist wearable phones. Look for our full event summary plus pictures and videos coming soon.